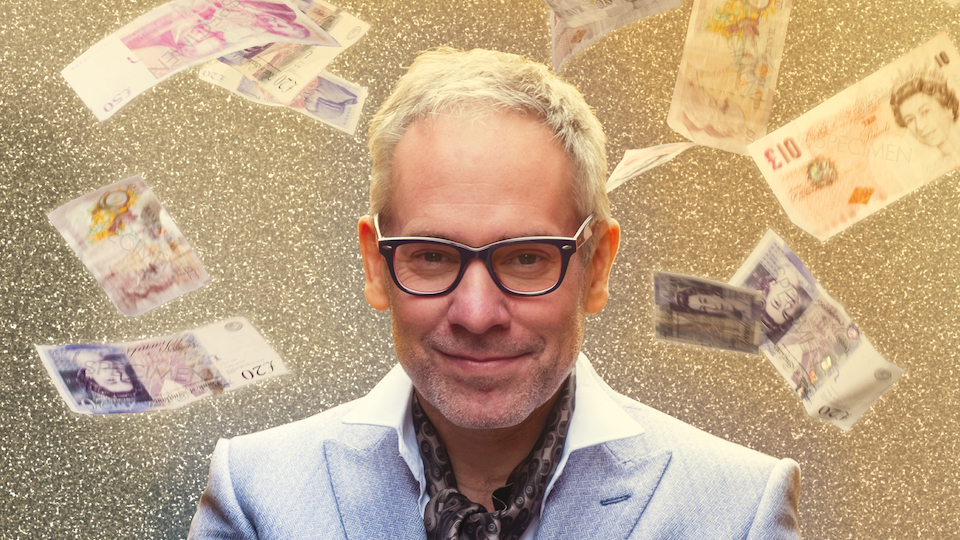 The world’s only financial expert and comedian, Dominic Frisby, brought Let’s Talk About Tax to the Edinburgh Fringe two years ago.

For this year’s festival he has devised a new game show, imaginatively titled Dominic Frisby’s Financial Game Show. It’s all about money, finance, economics but Dominic promises to make it exciting.

Contestants from the audience can win an array of prizes, which include £500 in cash – that’s £500 every show – silver bullion, bitcoin cash and more. They will battle it out in quizzes and games from ‘House Price Higher/Lower’, ‘Guess The Celebrity’s Net Worth’, ‘Crack The Safe’ and on through to high-pressure ‘Money Mastermind’ questions with the £500 jackpot at stake. I recently got to pick Dominic’s brains about what audiences can expect…

So, this is a financial trivia game show?

I’ll choose the contestants. It’s a cross between a quiz like The Chase and an old fashioned show like Play Your Cards Right. There’s Bitcoin Cash as one of the prizes, solid silver bars and £500 pounds in cash. It’s today’s money, yesterday’s money and tomorrow’s money.

This is one of the only shows on the Fringe where the audience will have a chance to win their money back?

Yes, depending on how much the tickets are, I think they cost a tenner, you’ve a chance to win 50 times your money back! Contestants will come from the audience but I’m not going to force anyone. Some people enjoy that sort of thing, a lot of people don’t.

I hope so, I hope it’s like The Price Is Right when people went loopy running down the stairs but I doubt it. It’s more fun if you take part, though. There’ll be a qualifying competition. There’ll be 4 or 5 people in the final and all the way through there’ll be little prizes to win. The audiences have been very nice.

They will be if you’re offering them money!

What was it that made you want to do a game show rather than stand up?

I used to do a character, I’d do The Posh Man Rap. I’m also a financial writer so this is where I cross my knowledge of finance with my supreme compering gift.

It sounds like it’s going to a bit different, which is what audiences want from the Fringe.

Yes, and we’re a nation who like quizzes. My motto is, ‘Always interesting, occasionally amusing’.

Stand up can be anything you want it to be now, not just a man on the mic. That’s what’s great about the Fringe as it brings about other ideas.

Yeah, that’s the thing of it being a show. It used to be that you had an act, going back to the days of The Vaudeville and before – your 20 minutes could be mind-reading or taming lions or juggling knives or telling jokes, dancing…whatever. Everyone had their 20 minute act. The idea of a show rather than an act has really grown in Edinburgh. A 50 minute act is quite a long time, so it brings out a story with a narrative with a beginning, middle and an end.

Tell me about the time you sold your house for gold. Was that a good decision?

Yes, it feels a long time ago now. In 2007 I could see that the economy was about to go tits up. Too much debt in the system. It always amazes me that nobody in the establishment saw the financial crisis coming, that not one economist or politician noticed. So, I sold my house and bought gold. For a period it worked well as an investment because gold did better than the housing market did. In the panic everyone rushed to gold, so it worked out very well for a bit but what I didn’t see coming was slashing interest rates to zero and printing all that money. Historically when people print money you get a situation like Zimbabwe or Weimar Germany. I didn’t realise they’d be able to successfully bail them out as much as they had done. Looking back, with hindsight, I should have sold all the gold in 2012 and bought a house back. But I’m comfortably off and I’m not complaining about anything, I’ve made some good and some bad investments over the years.

I’ve got this image of gold filling up one massive room in your house, did you keep it in your basement like Scrooge McDuck in DuckTales so you could look at it?

Oh no, it’d be too dangerous you must keep it stored in a vault in the bank. There is a long tradition of gold, especially in cultures where the financial system is weak and prone to inflation. In India they give gold as wedding gifts and what happened in some communities, a lot of places became victim to it in London, there was a spate of robberies with metal detectors.

Definitely not keeping a pool of gold in your basement, then. So, humour me in terms of explaining what Bitcoin is in case any of our readers are unsure.

Cash for the internet. It doesn’t exist, basically. You need to distinguish from cash and money. You spend cash, notes and coins – you spend that money directly with the person you’re buying from. There’s no middle man in the transaction, you give the pound to the newsagent for a newspaper. For years people have been trying to create a system of cash for the internet were person A can give the money directly to person B without using a bank or a credit card. They’ve been trying to establish a way to spend cash online without a middle man. There was a technical problem that stopped tem doing that and the big break through with bitcoin, why it’s exciting, all this computer code, is that it’s solved that technical problem. It’s a system of cash for the internet. You think of all the money we use, pounds or dollars, well this is a system of non-government money. In the show we will also give out copies of Moneyweek so you can be advised on where to invest it.

The game show sounds a great idea because everyone wants to win a bit of money and have a laugh along the way.

It’s going to be fun. I want the show to do well but I know I’m not going to win any awards with this show. I’m just planning to have fun with it. You know in some shows you feel there’s a huge pressure to enjoy it? If you don’t enjoy it you feel there’s something wrong with you. I want this to be a low pressure show. It’s not asking too much of you but you’ll leave it more enlightened than you entered.

And, if you play the game, possibly with some money in your back pocket!