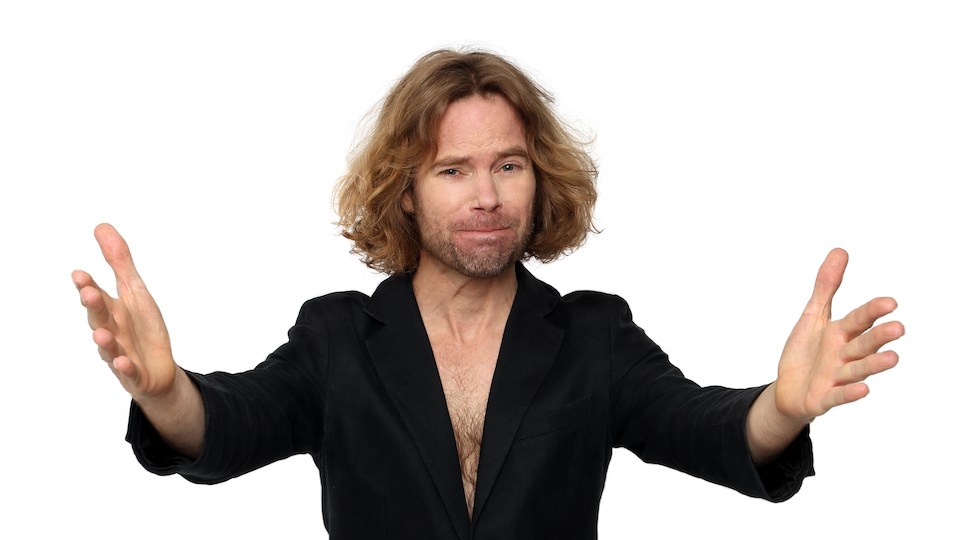 Comedian Barry Ferns is the man behind the successful independent comedy club, The Bill Murray. He has been performing stand up and sketch comedy for over 15 years, and is famed for his compering skills. His club Angel Comedy has grown from one night a week to two clubs that run over 45 comedy shows a week. Among Barry’s many claims to fame, he once changed his name to Lionel Ritchie so, clearly, he’ll do anything for a laugh.

And his latest Edinburgh show, Barry Loves You, will pose big questions. Who do you love? What do you love? And why?

I had a chat with Barry Ferns to find out what he loves about Edinburgh, different types of comedy and how he’s working to encourage love and support on the circuit.

How long have you been doing the Edinburgh Fringe and what is so special about performing comedy there?

The first time I came up to the Edinburgh Fringe I was a 15 year old boy, in the late nineties. There’s an interesting movement in comedy at the moment, a variety of styles. I think people see comedy as a lot more fixed. If you say you do ‘music’ to somebody they will ask you to clarify. Do you mean drum and bass? Pop? There’s a lot more language around what kind of music you like but not much language around what kind of comedy you like. I remember the shows that moved me most were the ones that had theatricality to them. Tommy Tiernan’s show in 1999 or 2000 was an absolutely moving show to watch, it was about his father, and Ireland, and there was a real sense of resonance to it. Hannah Gadsby who won the best comedy show award last year, well there’s an argument that that wasn’t really a comedy show. It was a tragedy show about her life and how she can’t do comedy because there isn’t room in comedy to talk about her life and her experiences.

Yes, comedy can move you to tears as well as to make you laugh. There’s a fine line between tragedy and comedy.

Exactly. Who do you like comedy-wise? A lot of people I really like, they have a depth to them. You don’t want someone that’s funny all the time.

True, acting and comedy come hand in hand. Rik Mayall is one of my favourite comedians, and he was of course a trained actor, too.

Yes, Rik was so charismatic. So theatrical. I remember a line from Bottom that was so over the top. ‘Oh capricious fortune plays her cards with me like a Mississippi boat whore.’ That’s like a line from an over the top Am-dram production. Of course, in theatre, the best shows you see are often very funny. The ones that are pompous and full of themselves are actually a little bit dry. There’s definitely a crossover if you see comedy and theatre as a Venn diagram, it has the best of both worlds.

Is that what you’re going for in Barry Loves You, then? What can we expect?

Well, I’ve been writing ever since I was ten years old. When I say that, I wasn’t writing textured, layered stand up back then, I was writing about frogspawn. The way that any spoken word is, for me, the type of performance that I like, it needs a sense of purpose. Audiences don’t just want to be performed at. There’s something very life-affirming about getting a sense of somebody from their performance. Stand up is very good because often people are talking about their lives or even if they’re doing traditional jokes, they’re often relative to who they are as a person. Stand up is often very personal. So, the way that I’ve approached Barry Loves You is because I think love is textured. The way that people love in the world is both facile and deep. I finished a show once and audience member said, ‘I loved your stand up!’ and it felt a little bit too much. Then, moments later, someone offered them a crisp and they said, ‘Oh, I LOVE these crisps!’ So, that’s where I was on the spectrum of love. We do use the word interchangeably. Love is an interesting notion. Love means something different to everyone. Every show is going to be unique. The way I love you may be something you like, other people may dislike it terribly. Everyone needs to be loved differently and everyone loves differently.

People also say they ‘hate’ something quite flippantly as well. Extremes of emotion that people throw those terms around so easily.

Yes, especially in a social media world where there’s polarised opinions. You either love or hate Donald Trump. There’s no-one online who feels ‘meh’ about Donald Trump. He’s almost like a perfect villain for our world. What I’m hoping to do with the show and as a human – without sounding too wanky – I want to have as many layers as I can to the show and talking about life as much as I can, as well as being funny, silly and facile. I try to include as much as I can about my own life even if those bits are a bit troubling at times.

So, the audience can expect their funny bones tickled while being taken on a deeper journey into how we approach love?

It’s not as intense as it sounds, it won’t be a traumatic experience like some other Fringe shows. I’m looking forward to doing the Fringe as it’s a real opportunity to practice your art. It’s the same room, same time and you can get into the rhythm of it. It’s a unique experience.

So tell me about The Bill Murray in Islington and your crowd-funding project to bring it into existence. It’s an amazing achievement, are you done fundraising now?

Yes, well Kickstarter ended, we wanted £20,000 and raised £40,000. All of that has now been invested as we promised. The Bill Murray is phenomenal. It’s a real community project. Because I started the original Angel Comedy it was my club and now, what’s happened is, it’s slowly included more and more people. It’s a real community. I’m not very good at taking praise any way but I’m not being disingenuous, it’s definitely a communal thing. It’s important, too. In society there aren’t that many places for people to learn new things and we want there to be room for everybody as much as there can be. I think people come along and see it as supportive, and feel positive about it. It’s humbling as well to have people come and see it in a good light. We put on 52 shows a week – we don’t have any funding and we put on more shows than the Soho Theatre. We’ve got a paid staff of about 10 and I’m constantly amazed at how it works on the good will of so many people.

Do you see comedy changing? Are you trying to make it less daunting to encourage people to start if they’ve always wanted to?

Any creative pursuit is difficult to get a foothold in because often you’re doing it for free to begin with. You need the support and sometimes just the fact someone else is doing it is all the support you need. Someone to feedback with, have tea with and moan with. Knowing there’s a place where you can perform or knowing there’s a place you can write for. It’s a difficult divide in the world. Unless you have an income, and it’s getting harder to get an income, to help you through. Some acts have money and connections so they don’t have to spend time out of work in order to get better on the job. It’s not a privilege everyone has to be able to focus on comedy when you have to work at a pork pie factory all day. It keeps you buoyant to know that someone else is struggling when you’re having a hard time, so that’s what we try to encourage at The Bill Murray.

Doesn’t that just make you feel a little warm and fuzzy inside?

In this article:Barry Ferns, Edinburgh Fringe Festival, The Bill Murray