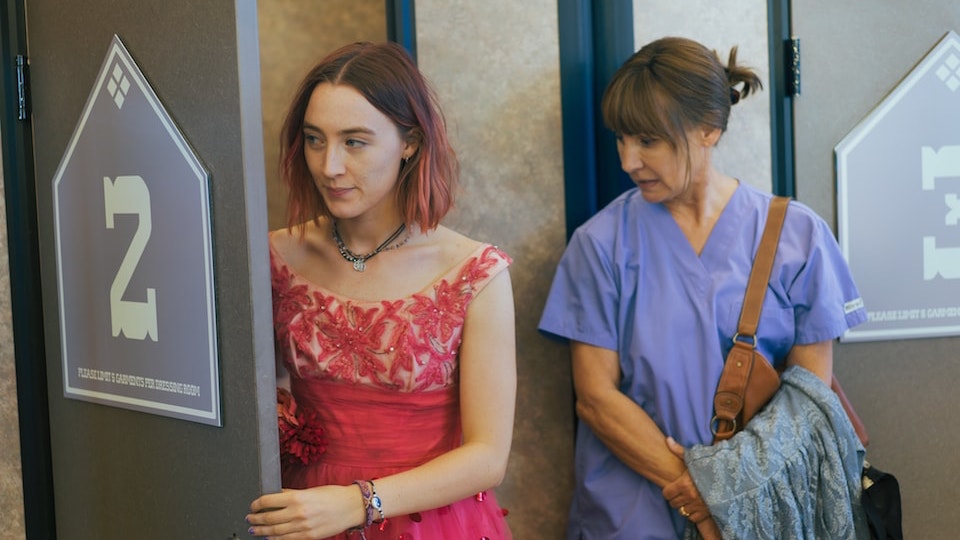 We’ve known for quite a few years that actress / screenwriter Greta Gerwig is prodigiously – some might say unfairly – talented. An engaging and idiosyncratic on screen presence, gaining awards and critical recognition for her keenly observed turns in the likes of Frances Ha, Mistress America, and Maggie’s Plan. As a writer, her work is truthful, emotional, and mines the inner lives of her characters, which invariably results in scripts that are both naturalistic and laugh out loud funny. Gerwig has now stepped behind the camera to make her solo directorial debut – the beautiful coming-of-age story Lady Bird – and what a debut it is.

Christine (Saoirse Ronan) wants to be known as Lady Bird. It is the name she has decided to bestow on herself as it makes her seem more interesting. Lady Bird is a senior at an all girl Catholic school in Sacramento – “the Midwest of California” she dryly observes. She wants to go to college in New York. She wants to appear more arty so auditions for the school play. She wishes she lived in a nice house, not on the wrong side of the tracks. She wishes that life wasn’t so boring. This film is set in 2002, in the era before smartphones. Boredom was still a very real and tangible thing back then. Lady Bird is just a kid, on the brink of adulthood, drifting and daydreaming through life. A character that should be familiar to us all.

The heart of the film is Lady Bird’s fractious relationship with her mother Marion (Laurie Metcalf) who wants Lady Bird to focus on life, and the realities of the world. Sure…you want to escape to New York, but can we afford it? Have you got a job? Are you going to get the grades? What are you contributing to your future? Have you even stopped to notice the sacrifices everyone else is making?

The interactions between Ronan and Metcalf are note perfect. Gerwig’s understanding of the mother-daughter dynamic is almost impossibly real, and her two actors absolutely nail it. In lesser hands, Lady Bird and Marion would be nothing more than a brat and a nagging shrew. Gerwig, Ronan, and Metcalf have instead given us something beautifully human.

Elsewhere we see Lady Bird hanging with her best friend Julie (the brilliant Beanie Feldstein), getting involved with boys (Lucas Hedges and Timothée Chalamet – you might have heard of them), and conspiring with her Dad (Tracy Letts) to apply for colleges on the East Coast.

Not much happens. Just life. Just the everyday dramas, heart-breaks, joys, laughs, relationships, and romances we all experience. Written, directed and performed with such exquisite detail and wit, the film manages to be both intimately specific and universally relatable. You can easily imagine people watching this and thinking they are seeing their own life reflected on the screen. But really it’s a film with something to say to everyone.

The blu-ray release of Lady Bird comes with a fantastic short documentary called Realizing Lady Bird. A 15-minute glance behind the scenes of the film, with contributions from all of the main creative and on screen talent. It leaves you wishing it was a bit longer, but Greta Gerwig is very insightful and eloquent as she talks through the various aspects of her film, from writing the script all the way to post-production. There is also a feature commentary with Gerwig, and cinematographer Sam Levy.

Lady Bird is available on Digital Download from 18th June, and Blu-ray & DVD from 2nd July.