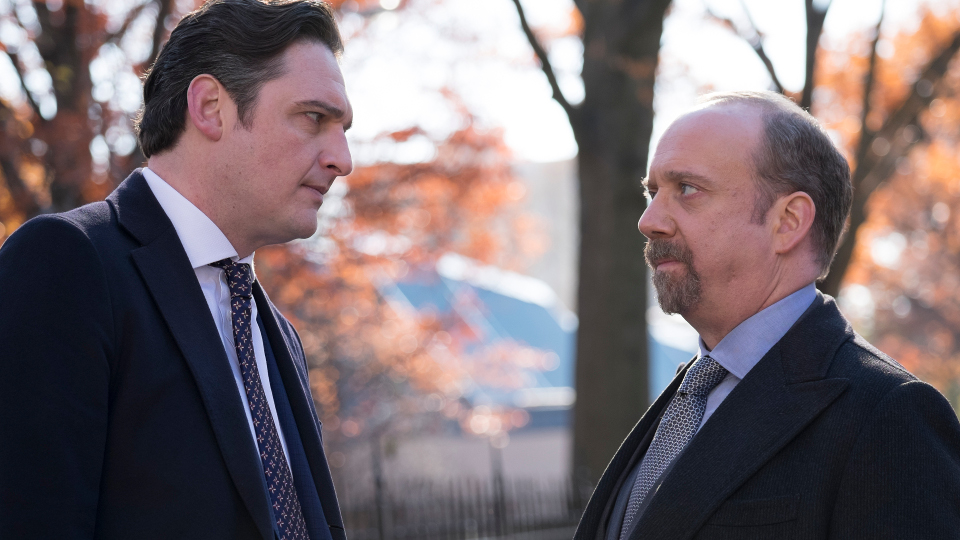 The episode opened up with Dollar Bill (Kelly AuCoin) setting up his latest shady deal involving a pharmaceutical company, animal rights activists and a big bag of cash. He thought he was on for a sure thing but Spyros (Stephen Kunken), head of compliance, spotted it and the pair set about each other.

Wendy (Maggie Siff) dragged them into her office for a spot of couples-style therapy. Dollar Bill wasn’t going to back down so easily and bombarded Axe with calls. Axe ignored them but Bill turned up in person and Axe said they couldn’t be sure it was safe to talk. Bill began to strip in the street to prove he wasn’t wearing a wire. Axe later dealt with it by taking Spyros for a meal at the exclusive Daniel restaurant. He also told Bill he could make his more creative moves through Victor’s fund.

One thing Axe needed Bill to do was to apologise, very publicly, to Spyros. Bill eventually did in front of the whole office and it looked excruciating for him. Despite things being sorted out and Bill kind of getting his own way he still took the opportunity to repeatedly ram Spyros’ beloved sports car a short while later.

The main focus of the episode was Axe trying to get back a slide from Dr. Gilbert (Seth Barrish). Gilbert was the one who created the toxic substance that infected Ice Juice. Axe wanted to make sure that Gilbert had destroyed it, which he promised that he had.

Axe continually pushed Gilbert and even had his fixers John (Brian Wiles) and Timmy (Tom Lipinski) try to find the slide. Axe had a problem because Gilbert couldn’t be bought. Chuck Rhoades (Paul Giamatti) eventually got to the doctor and he gave up the slide. Chuck taped it to the inside of his refrigerator for safe-keeping. Gilbert eventually asked Axe for $200 million and Axe immediately knew that he’d given up the slide to Chuck.

While all this was going on, Bryan Connerty (Toby Leonard Moore) continued to pursue his investigations. He pondered why Lawrence Boyd (Eric Bogosian) wasn’t in jail. Chuck and Sacker (Condola Rashad) got to Boyd first and gave him what he wanted, his yacht back. They got new information out of him and added it to the old records to try and keep Connerty away. Sacker wasn’t completely happy about the whole thing and Connerty realised something was wrong.

Elsewhere in the episode, Axe sent a reluctant Taylor (Asia Kate Dillon) off to Silicon Valley. There they were meeting with quirky billionaire venture-capitalist Oscar Langstraat (Mike Birbiglia) to hear various pitches.

Taylor really didn’t see the point and wanted to leave after the first pitch. Oscar convinced Taylor to stick around a while longer and they later bonded over a Star Wars reference. Oscar invited them to dinner but they had made other plans.

Those other plans were a Netrunner tournament and Oscar just happened to be there as well. After playing each other they headed back to Oscar’s fancy mansion. He turned off his home AI out of politeness and the pair were soon engaging in a steamy sex session. The next morning Taylor headed back home after sharing a very warm embrace with Oscar.

Watch the Billions 3×06 trailer below:

The official synopsis for Billions 3×06 reads:

Axe tracks down a critical piece of evidence that could destroy him.