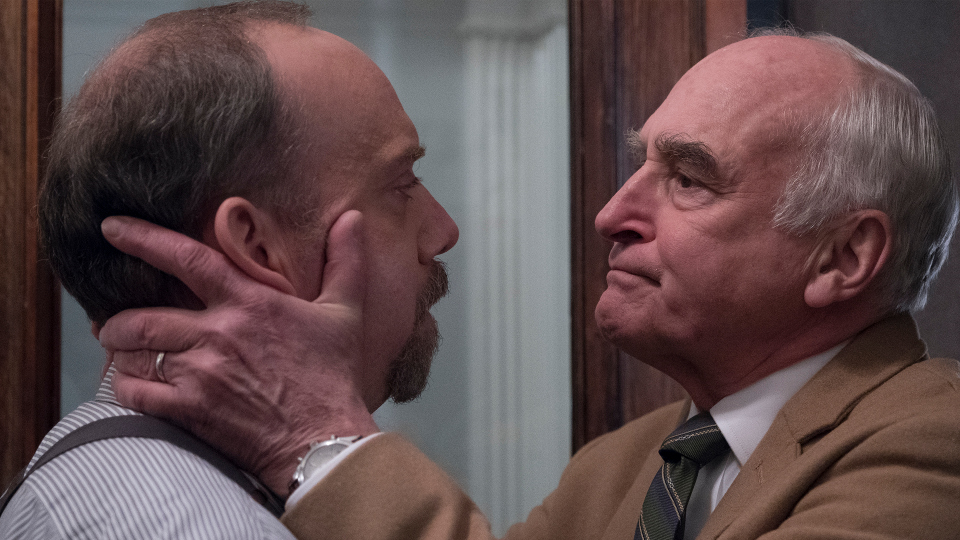 On the latest episode of Billions, Bobby “Axe” Axelrod (Damien Lewis) had an idea to get his money moving.

The episode opened up with Ira (Ben Shenkman) and his girlfriend sat in a fancy restaurant. He had planned to propose but his current financial situation was dire following Ice Juice so he chose not too. When offered shavings of white truffle (at $14 a gram) on his pasta Ira turned it down but his girlfriend went for 20 grams. It was impossible not to laugh at Ira’s face with each new shaving draining his funds. His money motivated girlfriend was happy to wait to get married. On the next table sat Axe’s new fixers John (Brian Wiles) and Timmy (Tom Lipinski) who were recording Ira’s conversation.

Meanwhile, Axe and Lara (Malin Akerman) were attending a meeting to sign their divorce papers. Bach (Glenn Fleshler) explained that their situation was complicated and it might take a while to finalise. After the signing, Axe and Lara had a chat about their finances. Lara was pleased that Axe would split things 50/50 but Axe was worried the government might take it all. This was news to Lara who looked devastated when Axe said he could be left with ‘just’ $300 million. Lara was worried wasn’t enough and Axe agreed it wasn’t. He needed to hide more away and said he had an idea.

Axe approached his old cop friend Raul (Ruben Santiago-Hudson) and played matchmaker between him and Mike (Hari Dhillon). Axe was so desperate to get Raul on board that he had Chef Ryan (Timothy Davis) recreate a burger that he and Raul had eaten together a long time ago. After Raul and Michael agreed to work with Axe, he pretty much told Michael that he now owned him and would tell him everything to do.

In the Rhoades household, Wendy (Maggie Siff) told Chuck Rhoades (Paul Giamatti) he might want to come home late the next night as his father wanted to see the kids. Wendy though it best that Chuck stay late at the office with them not being on best terms. She eventually took the kids to see Chuck Rhoades, Sr. (Jeffrey DeMunn) instead. While there he tried to give her a bunch of Chuck’s old stuff but she refused to take it. Both he and Chuck seemed willing to make amends but only if the other made the first move.

Bryan Connerty (Toby Leonard Moore) tried to talk to Ira to have him testify against Axe. Ira agreed to come in and see Connerty and Dake (Christopher Denham). Before he did though, Axe got to him and offered a deal of $30 million for his worthless Ice Juice shares plus an expensive engagement ring to propose. In return, Ira had to agree not to testify against him or pursue a future civil suit. Needing the money, Ira went for it and told Connerty and Dake that he had no info on Axe but would give plenty against Chuck and his father.

Chuck found himself having a hard time with Attorney General Waylon Jeffcoat (Clancy Brown). He wanted him to prosecute a prisoner who had killed a guard that was beating him. Chuck tried to stop it going to trial and even had information leaked to the media. However, the AG wasn’t for backing down and forced Chuck to push ahead. Chuck set Sacker (Condola Rashad) up with a ‘war room’ to work on white-collar cases that the AG had forced them to drop.

Elsewhere in the episode, Taylor (Asia Kate Dillon) and Wags (David Costabile) interviewed potential quantitative analysts for Axe Capital. The idea was to bring one in with an algorithm that could mimic the way the staff worked but do so far quicker. This had the staff nervous about their jobs, especially Mafee (Dan Soder). Wags didn’t seem keen on the idea either and eventually sabotaged the only decent candidate. Taylor found out and decided that instead of hiring someone they would build their own algorithm.

At the end of the episode, Ira took the ring Axe bought for him and proposed to his girlfriend. She said yes.

Watch the Billions 3×04 trailer below:

The official synopsis for Billions 3×04 reads: