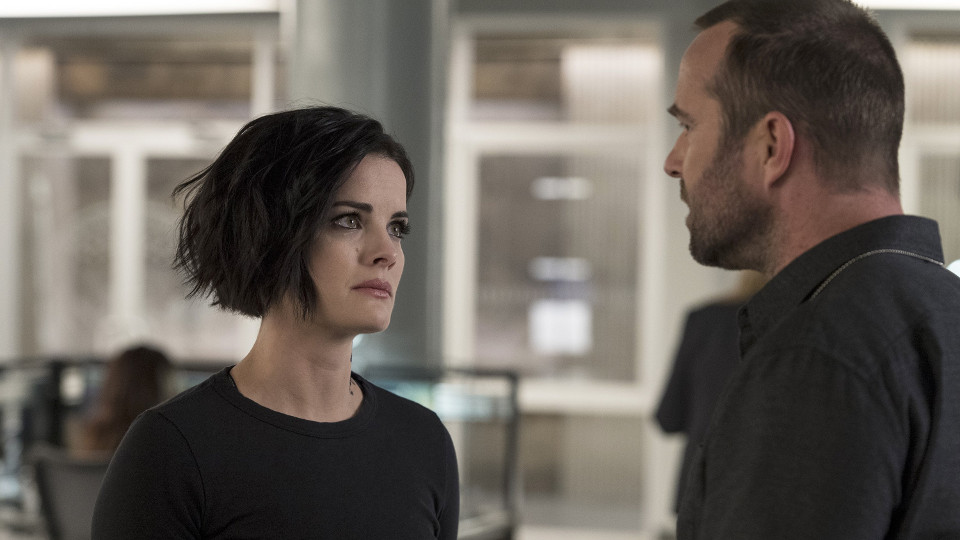 In the latest episode of Blindspot season 3, Cade (Tom Lipinski) resurfaced and came to Jane (Jaimie Alexander) for help.

The episode opened up with a flashback to one year earlier. It showed Cade shopping for nappies. He was stressed out because he couldn’t find the ones his partner asked for. When he tried to ask for help he was sedated by injection, a hood placed over his head and kidnapped.

Back in the present day, CIA buddies, Keaton (Chad Donella) and Zapata (Audrey Esparza) were burning evidence. Keaton took a call that a CIA prison transport plane had crashed into the East River. At the crash site Zapata spotted a logo for Valkyrie, the flight company, and thought it was linked to one of Jane’s tattoos. Keaton wanted to keep it internal to the CIA but Zapata said they should loop the FBI in on it.

Meanwhile, Weller (Sullivan Stapleton) and Jane had Avery (Kristina Reyes) over for dinner. Avery was surprised that Weller wouldn’t let her drink alcohol as she had when she lived in Europe. Weller explained they had invited her over to show her something she needed to see. He showed her the information that Nas (Archie Panjabi) had uncovered.

The information showed that her adopted father had killed someone and that Hank Crawford (David Morse) had covered it up. Avery didn’t want to believe it and refused to look at the folder. Avery stormed out.

At the FBI, Reade (Rob Brown) was talking with U.S. Attorney Antar Dhillon (Samrat Chakrabarti) about the Crawford case but was told they needed more than circumstantial evidence.

During the night Jane woke and thought she’d heard a noise. She woke Weller and went to investigate. She found Cade in their apartment with a gun. Cade said he needed her help and wanted to be back with his husband and child. He explained that the CIA had gone back on their word and kidnapped him. Weller said it would be difficult to sort it out if Cade had escaped from a black site. Cade explained that he was on the crashed transport plane. He said had valuable information on three fellow prisoners and that the plane was crashed on purpose.

At the FBI, the team argued with Keaton about what to do about Cade. Keaton was against giving Cade a deal. Information came in about the other prisoners and they were all incredibly dangerous. Zapata briefed the team on flight company and its connection to Crawford. Patterson analysed the black box from the plane and created a simulation of its flight. She discovered that the black box had been hacked to crash the plane on purpose.

Weller and Jane questioned Cade and asked him for more information to push for a deal. He told them that one of the prisoners got out of his cuffs, killed the guards and then they jumped with parachutes. He said that the escaped prisoners were going to carry out a building raid later than night. They later brought his son in to see him.

Avery turned up to apologise for storming out earlier. Weller spoke to her and said it was ok. He told her that the file they tried to show her had a police report on her adopted father. Avery agreed to take a look to see if she could help them figure things out.

Jane appealed to Cade for more information, he was reluctant but eventually gave up more info. He said at the black site he was visited by a woman who offered him freedom and insane amounts of money in exchange for a job. He didn’t know where the attack was happening but could give the team a description of the woman and the location she wanted them to meet before the attack.

The team worked out that the woman must have been flying the plane. They dug up details on her and found her name to be Quinn Bonita. They showed her photo to Cade who made a positive ID. It turned out that her husband was beheaded by terrorists. She was carrying out an attack against the CIA in revenge for her husband’s death. Zapata couldn’t get hold of Keaton and realised that was probably where the attack was happening. The location was classified but Zapata remembered seeing a logo for Bellmore University at Keaton’s apartment.

At the location, Quinn and her team made her way inside and executed everyone in sight until they got to Rob Donnelly (Ron Rifkin), the man she held responsible for her husband’s death. She planned to have him beheaded on video like her husband. Before she could, Keaton tried to fight back. Just in time the team arrived and killed Quinn and her team.

Back at the CIA, Keaton told Zapata that Cade will go back into a CIA black site. Zapata felt it was unfair but Keaton said it was just how it was. When Zapata went with Reade to move Cade he asked about his deal. She said it was at his hotel, Cade flipped and took Zapata hostage. Jane shot Cade to end the standoff.

In Brazil, Roman (Luke Mitchell) was talking to Crawford about Blake’s (Tori Anderson) abduction. He said there was nothing he could do at the time to save her and said they were wasting time. Crawford said they would wait for Jean-Paul (Bruce Davison) who was a very dangerous man.

A ransom came in for Blake and Christophe (Luke Kirby), the son of Jean-Paul who was also taken. Jean-Paul’s team identified a possible location for their children, a nightclub. Roman advised against Jean-Paul’s plan to storm the club with his team of ex-Mossad soldiers but Crawford went with it. Roman tried to change Crawford’s mind but he refused because he gave his word. Roman said he was willing to go and make sure Blake got out safe.

Roman explained to Crawford that he had worked out what he was up to. The whole thing was designed to get Crawford closer to Jean-Paul. Roman said that he killed Jean-Paul’s men to protect Crawford. It looks like Roman has really gained Crawford’s trust.