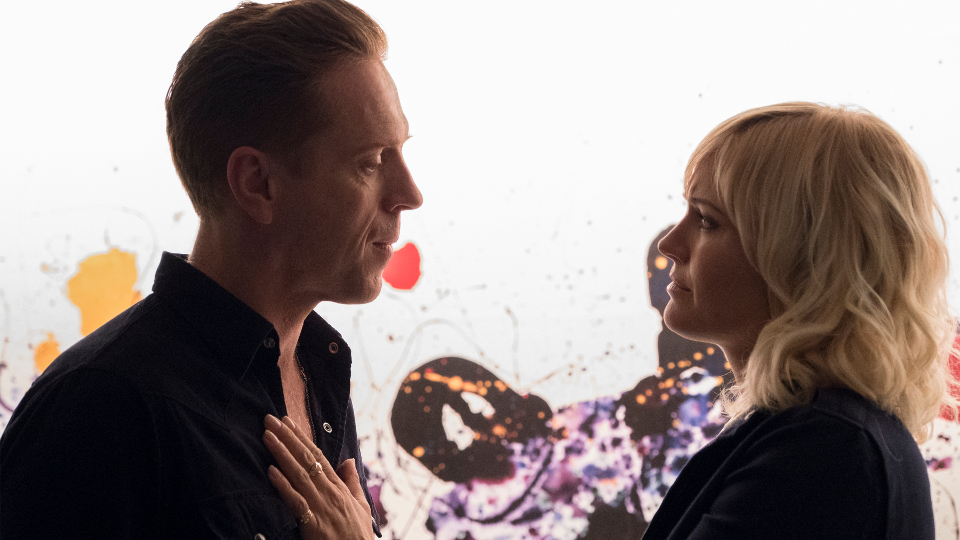 On the season two premiere of Billions, Bobby “Axe” Axelrod (Damien Lewis) looked for a way to get his accounts unfrozen.

The season two premiere opened up in Washington, DC with Chuck Rhoades (Paul Giamatti) on the way to meet with his new boss Attorney General Waylon Jeffcoat (Clancy Brown). Jeffcoat taunted Rhoades about how Oliver Dake (Christopher Denham) was getting all the credit for Axe. He told Rhoades that he’d be one of the only staff keeping his job. Rhoades was tasked with reviewing the high profile cases and prioritising those that made sense to go after.

Meanwhile, at Axe Capital’s new Manhattan office, Chief Investment Officer Taylor (Asia Kate Dillon) was holding a meeting with the core staff. ‘Dollar’ Bill Stearn (Kelly AuCoin) was kicking off at having the meeting without Axe and at the fact that their assets were still frozen. Axe was at his new bachelor pad meeting with Wendy (Maggie Siff).

After hearing the complaining, Taylor said their first order of business was the upcoming idea dinner with the top 10 hedge fund managers. They said the staff would all meet their previous year’s bonuses as a minimum which got the staff excited. Wags (David Costabile) stepped in to give his pep talk to the team.

Taylor needed the team to come up with an idea that was so good, everyone would be talking about it after the idea dinner. Axe had to blow everyone away so that he was still in control. After the meeting, Wags took Taylor aside to tell them they had no authorisation to promise bonuses.

Axe met with Bach (Glen Fleshler) and Ari Spyros (Stephen Kunken) to work out how to get his accounts unfrozen. They proposed giving up his license to trade which would get his money back but Axe wasn’t happy and said it was like admitting he was guilty.

Rhoades met with Dake over dinner and drinks. He wanted Wendy kept out of the Axe trial. It took a little effort but Dake finally agreed and said that Rhoades now owed him a favour. He chose to keep it in reserve for a later date.

Elsewhere in the episode, Lara (Malin Akerman) had appointed Stephen Birch (Jerry O’Connell) to oversee her money. Axe wasn’t happy but told her to get on with it and he’d support her. Rhoades and Wendy were still living together. Dake refused to give Bryan Connerty (Toby Leonard Moore) the name of the source who tipped him off about Ice Juice.

Chuck Rhoades, Sr. (Jeffrey DeMunn) met with Black Jack Foley (David Strathairn) to apologise for putting Chuck forward for governor. Foley was having none of it and stood behind Chuck. He seems to think that Rhoades, Sr. will come around.

Bach paid a visit to Connerty at the request of Axe. Connerty refused to back off as Bach had nothing to offer him. Connerty updated Dake and told him that he felt Axe almost gave up his license to trade.

Axe finally returned to the office to see what idea they had come up for him. Wendy told him he needed to give up trading until the case was over. Axe reluctantly agreed, much to the delight of Chuck and Dake.

Wendy took Chuck to see his Mistress (Clara Wong) and the pair had him cuffed to a cage. They felt he deserved to be punished and Wendy gave him a few good swats with a paddle. Chuck asked about the man she was sleeping with last season and wanted to know all the details. He said it was the biggest punishment she could give and she didn’t hold back.

At the end of the episode, Taylor came up with an idea for Axe that revolved around Internet of Things devices. Taylor went in his place to the idea dinner and blew away the hedge fund managers with the idea. Just one episode in and it’s already interesting!

Watch the Billions 3×02 trailer below:

The official synopsis for Billions 3×02 reads: