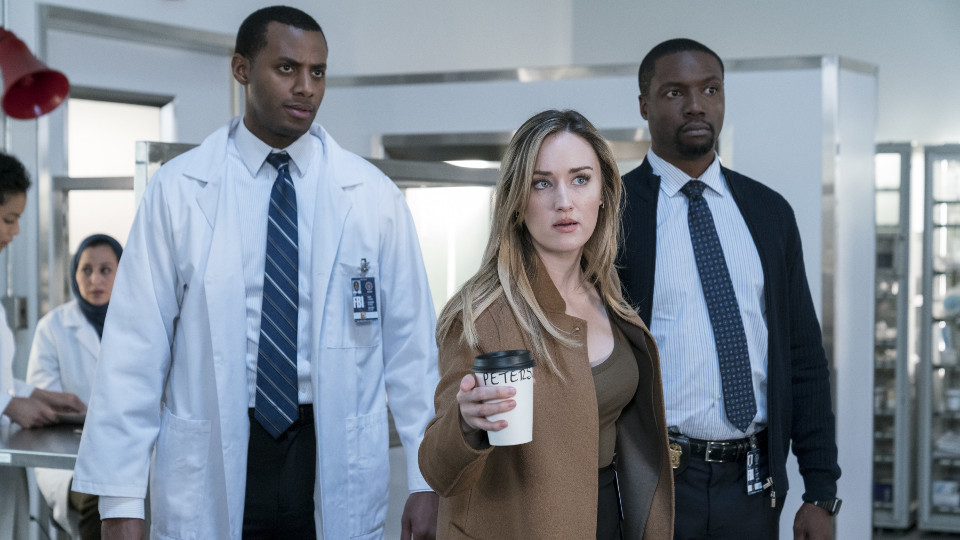 In the latest episode of Blindspot season 3, Patterson (Ashley Johnson) found herself stuck in a loop.

The episode opened up with Patterson getting woken up just before 6am by a neighbour playing the trumpet. As she tried to go back to sleep her alarm went off and it was time to head into work. When she arrived she shared a lift with a professor named Jack Izenberg (Bryce Pinkham). Jack seemed interested in her and wanted her to attend a talk he was giving. Zapata (Audrey Esparza) also got in the lift and witnessed Patterson failing miserably at flirting.

In the office Reade (Rob Brown) was banging on his office window to get their attention. They joined him and he announced that he had proposed to his girlfriend. Zapata looked devastated but agreed to be his best man.

After Reade’s news, Patterson was approached by Afreen (Ami Sheth), one of her technicians who said she’d solved a new tattoo case. She had discovered some numbers that when multiplied by pi matched the autopsy reports of three dead marines. Each died on the same day in different locations from a drug overdose.

Reade authorised the exhumation of the bodies but they had been cremated. Instead, Patterson proposed a dangerous test of their cremains. The FBI borrowed some centrifuges and Patterson invited Izenberg to join in the testing. Something seemed wrong during the test and when Patterson went to investigate the centrifuge exploded.

The episode then went all Groundhog Day and Patterson was back in bed being woken up by her neighbour’s trumpet. The day began to play out in the same way and Patterson thought she was having a really bad sense of déjà vu. When the centrifuge exploded the day reset again. Before it exploded for a second time, Patterson noticed that the device had been sabotaged. Someone must have been trying to prevent the test from being completed.

As the day got underway for the third time it was revealed that Patterson had been badly injured in the explosion. She was actually now in a coma but still trying to solve the case in her head. Her condition was in a bad way and she had to have emergency surgery.

The third day appeared to be the same again and Patterson was predicting events before they happened. However, Izenberg wasn’t in the lift, it was Patterson’s true love, David (Joe Dinicol). He said he was there to help her and that she should fix the day by breaking the loop.

David wasn’t the only ghost she saw as Stuart (Jordan Johnson-Hinds), Dr. Borden (Ukweli Roach) and Director Pellington (Dylan Baker) also cropped up throughout the day. In an effort to break the loop Patterson when out of her way to know things before they happened. At the meeting with Reade, she announced that Zapata loved him.

At the centrifuge test, Patterson tried to stop it by saying that there was sabotage. Reade pulled in those involved to be interrogated by the team. Zapata went ahead and started the test anyway which resulted in another explosion and day reset.

In the lift on the fourth day, Patterson found a naked Roman (Luke Mitchell). He flirted with her and said he was the bad boy she always wanted. At Reade’s meeting he announced that he had proposed to Zapata and they were getting married. In her lab, Patterson was approached by Weller (Sullivan Stapleton) and Jane (Jaimie Alexander) who had switched places.

The fifth day, Patterson walked out the lift into a classroom where the team and Roman were dressed like the cast of The Breakfast Club. Patterson finally worked out Roman’s clue in the tattoo pointed to photo 7 in the autopsy reports. It revealed that the marines were poisoned. David turned up again to help her solve the final piece that pointed at General Peter Mahoney (Dominic Fumusa). He had his marines carry out an unsanctioned mission in China.

Things were looking bad for Patterson in the real world as she awoke again on day six of her loop. This time things were different and she had to fight the General. After defeating him she made peace with David, Stuart and Pellington then woke up in hospital. She wrote a note to the waiting team that the General was guilty.

Two days later, Weller and Jane visited Patterson to tell her the General confessed. They brought her a crossword book to pass the time. Her time in the coma made her think and she gave Weller and Jane some advice about Avery. Later, she promised Zapata that she would call Izenberg. Patterson insisted that Zapata should come clean with Reade about how she felt.

At the end of the episode, Patterson told Zapata about her vision of Dr. Borden and how something seemed off. It was then revealed that Dr. Borden is still alive! Last we saw he was bleeding out and detonated a grenade he was holding so we’ve no idea how. Still, he looks well and was patching up a man who told him that “the attack is almost ready”.

Read our preview of Blindspot 3×15 Deductions.