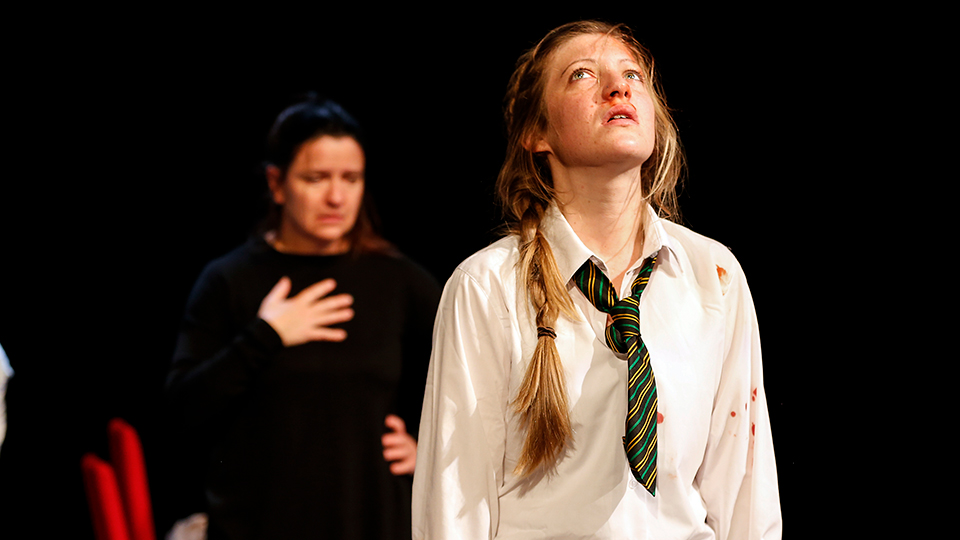 Cathy first premiered in October 2016 before visiting theatres, prisons and hostels around the UK. The production received a well respected run at the Edinburgh Festival in 2017. The production has been researched with the support of housing and homelessness charity Shelter. It will tour all over the UK, but now, it’s time to reach the masses, at the Soho Theatre. The play is inspired by the fantastic Jeremy Sandford and Ken Loach’s film – Cathy Come Home.

Homelessness. Can you imagine being without a home? Is it an alien concept? I’ll be OK. I’ve got a job, everything is secure. But, is it? How easy would it be for you to lose your job? Your security? Your home? It doesn’t bear thinking about. But, the reality is, it could actually happen. It’s an awful thought. Unimaginable. It’s something that has been splashed across the front pages of the newspapers. It’s a story. A headline. Something to grab the attention of the public, only for them to throw is to one side and get on with their day. Can you imagine being forced to live thousands of miles away from your dependents? Your elderly family relatives? People who need you? Welcome to Great Britain 2018. This is actually happening. This is a reality for thousands of people.

This play is very real. The actors portray every single struggle that would be met, in such circumstances, with real integrity. I defy you to leave the theatre thinking that we, as a nation, are doing enough to help those less fortunate than ourselves. This play will change everyones image of homelessness, and the ease in which one could find oneself in such a situation. Not so much ease, but perhaps, you can see for yourself, that sometimes, those preconceived ideas and stereotypes are so wrong. Phrases in the play include ‘people like you’ – which are explored by the characters. What is meant by this statement? Londoners know all too well of the spiralling, rising high rents in London. Whilst private landlords are rubbing their hands in glee, private renters are feeling the pinch. Yes, we know that we are paying the cost of a mortgage of a house elsewhere in the country, but, what else can we do?

This play focus on Cathy, and her 15-year-old daughter. Due to unforeseen circumstances, Cathy finds herself in a tricky situation. A single mother, who loses her job, with limited financial support, she has to find a way to support herself, and to keep a roof over her head, and also her child – who is about to sit her GCSEs. The reality of being patronised by a housing officer who offers her a home in N5, is hard to watch. She excitedly announces – where is N5? Is this Kent? Or maybe somewhere in North London? Only for her to be told that it in in fact, in Newcastle. Newcastle?? Bearing in mind that her child is about to sit her exams in a few months time. The problem is, there are others who also need a home. Others who are more in need, with younger children and larger families. She is told that the waiting list to get another flat in London could be 6-7 years. 6-7 years. Let that sink in. And that she would have to apply once a week, every week, in order to be considered. Every single week, for 6-7 years. She is number 459th in the waiting list for a flat. Can you imagine this happening to you? The acting is immense. It is painful to watch. It is real. Cathy, played by Cathy Owen puts her heart, her entire being and every inch of her soul in to the character. She is phenomenal. You feel every ache, every emotion, and every heartache that she goes through. You feel like reaching out and giving her a hug, or a helping hand.

This play doesn’t only just shock. It knocks you sideways and makes you want to do more to help. The last 10 minutes of the play is about audience participation. Flip-charts and pens were used to write down suggestions shouted out from the audience, as to what we can do to help. Some of the suggestions included:

There was a whole lot of suggestions, and a lot of anger and upset filling the room. Are we, realistically, as a nation, doing all that we can to combat homelessness? Are we really? How many people have you walked past today? Human beings? In a hurry, rushing along to your next appointment? Could we not be doing more? Should we doing more? This play drives the issues home with great passion, and brings about an added reality check too.

As with all Cardboard Citizens productions, a proportion of tickets for all venue dates will be made available to people with experience of homelessness at £1.