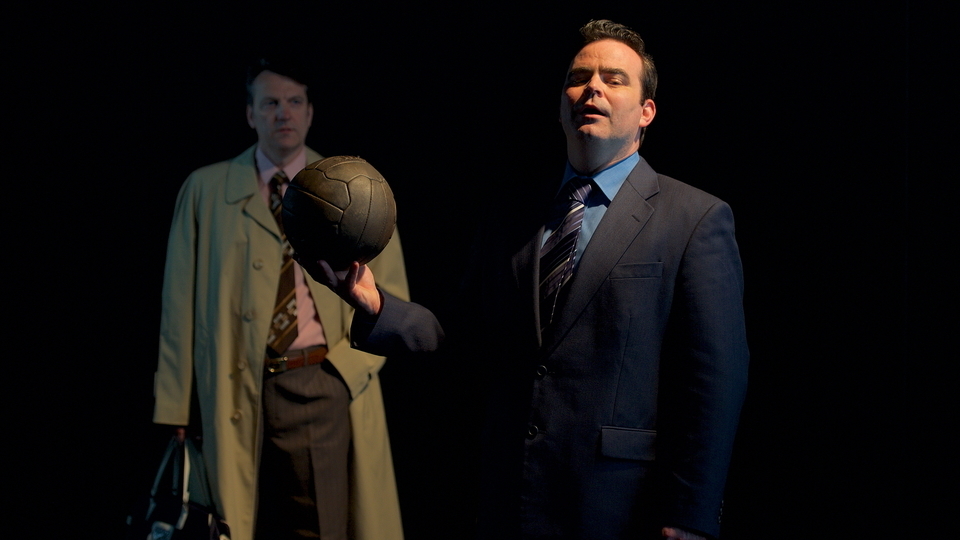 Based on the book by David Peace, The Damned United retells the story of Brian Clough’s appointment and swift departure as manager of Leeds United in 1974. Based on real events, Anders Lustgarten’s vivid adaptation is a study of power, corruption and sheer ego within the confines of an aggressive culture.

Brain Clough enjoyed great success managing Derby County with the unwavering support of right-hand man Peter Taylor. In July 1974, he’s headhunted as manager for Leeds United following Don Revie’s departure to England. An open critic of ‘Dirty Leeds’ and their aggressive tactics, Clough makes clear his intentions to clean up the game and reform his new team. Full of hubris, he arrives at Elland Road determined to drive forward a new era. It’s a tenure which will last no more than 44 days…

Red Ladder Theatre’s new version of The Damned United is a compact, intimate staging which has been creatively achieved under the direction of Rod Dixon. Comprised of a three-man cast, Clough’s story is crosscut between his earlier success at Derby and his disastrous appointment at Leeds, exploring how one man’s audacity can take him from the greatest of heights to a devastating fall.

Lustgarten’s script is pointed and lean, retelling the story in a single act against projections which punctuate Clough’s 44-day tenure and offer a documentary realism. Dialogue is fierce and uncompromising, showcasing the harsh tongues of a masculine environment where the loudest voice is often the most effective. It’s a fascinating spin on the powerplay of a Jacobean court, and Clough is arguably the most heavily weaponed figure in regards to fluency of wit.

A small cast establishes a complex world within an intimate space. Luke Dickson is ebullient and acute as Clough, perfectly imitating the man’s vocal rhythms and capturing a remarkably disputatious ego. It’s a very physical performance which hints towards a subtle fragility, despite Clough’s own overconfident, bravura showboating.

David Chafer brings a warmth and honesty to Taylor, which is instantly likeable and provides the perfect counter to Clough’s dominating persona. Chafer’s portrayal is a beautiful contrast and is almost the Jekyll to Dickson’s Hyde when the two men come into conflict. There’s a sense that Taylor is Clough’s own conscience; a crucial control mechanism and the compass to Clough’s undisciplined genius.

Jamie Smelt plays a host of roles from chairmen to trainers,  showcasing a broad range of character ability. He’s particularly contemptible as Leeds’ odious chairman, effectively spotlighting Clough as a victim of circumstance who demands compassion.

Scale and vista is brought to the production through innovative front and rear projection; presenting key players in the game as shady backstage figures, whilst signposting key events with imagery projected onto a corrugated backdrop which mimics a sideline dugout.

A titanic collision between Clough and Revie – within the mild-mannered confines of a television studio – is brilliantly staged with an interactive video which vividly grounds the play in reality. By bringing together meticulous production design and excellent costume, an evocation of the period is felt at every level – no less than in the playbill which is lovingly modelled on a Seventies’ two-tone match day programme.

An intimate production which offers a broad landscape, this lean play is almost Shakespearian in its exploration of powerplay within a court of complex players. Combining innovative stage technology with urgent and engaging performances,  The Damned United is swift, compact and bullishly to the point; vividly encapsulating the machinations of an unforgiving business whilst delving deep into the psyche of a brilliant but flawed man.