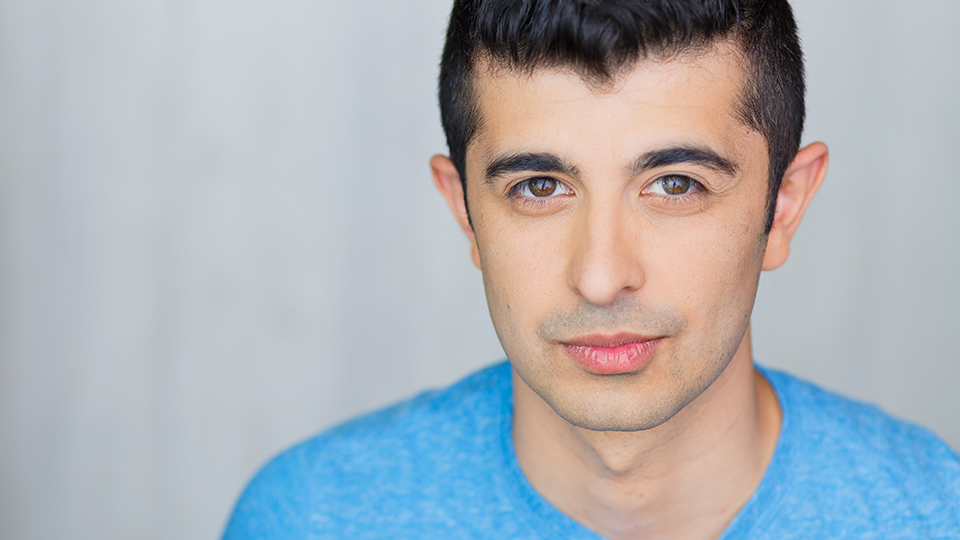 Chicago actor Behzad Dabu is perhaps best-known for his recurring role on hit US thriller How to Get Away With Murder.

In the show he plays Simon Drake, a character that was introduced in season 3 and is central to season 4’s unravelling mystery. With an extensive background in theatre, Dabu is well-known outside of his TV work and he’s also one of the founding members of The Chicago Inclusion Project.

I caught up with Behzad recently to find out about his experience on How to Get Away With Murder, discuss the challenges of transitioning from theatre to TV and to find out more about The Chicago Inclusion Project.

We’re a little bit behind with How to Get Away With Murder here in the UK so without spoiling anything about your character’s fate, tell us what it’s been like to be involved with the show.

I was really honoured to be involved in the show. It’s a show that does a lot for representation and we’re lead by one of the greatest actors of all time in Viola Davis. Getting the chance to work with her and be in such close proximity to her, and a great crew, it’s really an honour and I’m thrilled to be a part of it.

The character you play, Simon Drake, has really come into his own in season 4 and the writers have developed him significantly. Did you have any idea when you first started on the show that he was going to be developed in the way he has?

No, when I first started on the show it was an episode contract at a time so I never knew what was going to happen with Simon. What’s really cool about Shondaland, and all of her shows, is that the writers don’t often know what’s happening. We’re sort of creating as we go along. We’re watching what’s happening onscreen and developing characters midseason. It’s really great for the writers to kind of pull ideas from their head midseason, show it to us and we get a chance act off of it. I didn’t know!

Simon first appeared in season 3 of the show. Is it quite intimidating as an actor to join a show that has such a strongly established ensemble cast?

It is intimidating because the audience already has their favourites and they’ve already developed the story, then it’s like, ‘who’s this new person?’ Also as as an actor you don’t want to disrupt the chemistry, vibe and feeling that’s already happening on set. Luckily for me everybody was so welcoming and that’s what really put myself at ease knowing how welcoming the entire cast and crew was. It was really great.

Simon is pretty central to the whole mystery this season. Has it been good for you to be able to develop him more, allow audiences to get to know him better and be more involved with the show?

Yeah that’s what I’ve been wanting for a while, just to have more involvement as you say. It’s been great. Every time I got a script that had Simon in it, it really made me smile because I love being involved with it and being a part of it. I think Simon is interesting. He’s a fascinating foil and deeply layered, he’s not all bad or all good and that sort of mix is interesting to the story. I liked the increased involvement of Simon this season.

It caught me a little off guard this season when Simon came out to Oliver and told me he was in love with him. I really liked that development and you got to share some sweet scenes with Conrad Ricamora (who plays Oliver). What was it like working more with him?

It’s so great. Both Conrad and I come from a theatre background. Most of my training and experience was in the theatre world and for Conrad that’s true as well. We’ve both been involved with shows on Broadway and it’s one of those things where we we get along really well. He’s also a really, really sweet man so it was nice. When you look back after we see that my character has come out to Oliver, even in season three there were little lines that sort of hinted at it. It sort of all makes sense in hindsight.

In season 3 Connor is being mean to Simon and Oliver says, ‘why are you guys so mean to him?’ and then later on in season 3 I make a joke at Connor’s expense about Oliver is giving me all the pointers I need and all these little tiny time lines that are sort of foreshadowing the bigger thing that comes in the middle of season 4.

As well as How to Get Away With Murder, you’re also on another show right now called The Chi. That show hasn’t made it over to the UK yet but tell me a little bit about it.

How did you get involved with The Chi?

Well I’m actually a Chicago actor and the show shoots in Chicago. The creator is Lena Waithe, and we went to the same college but we didn’t know each other. When I heard about the show, I felt that there were so many connections and I really begged my agent to get me in, and I auditioned for the role. It’s actually interesting because I had some hesitation with the role at the beginning. I asked the casting directors if I could put my own spin on it and I did. It ended up working out in my favour.

Yeah it did. My personal life is very similar to my character Amir in The Chi so I wanted it to ring true. I suggested a few things and it worked out.

As you mentioned earlier you have an extensive background in theatre. Were there any challenges you had to come moving from theatre into television?

Oh absolutely. In theatre you’re always aware of where the audience is and on television you always have to be aware of where the camera are. The difference is in theatre the audience isn’t moving but in television the cameras constantly moving, going up and down and round and round. One of the things that I’ve gotten good at now, that I was struggling with in the beginning, is always keeping my third eye on the camera. You can’t actually look at the camera, it’s sort of a unique skill to just know where the camera is peripherally.

Would you say you have a preference in terms of doing theatre or television work?

No I love both for different reasons. I love that I’m able to do both and I hope that I have a career filled with both. I hope I don’t have to choose one or the other. There’s nothing more magical than walking on stage to do a play for the first time for a first role. There is nothing more magical than that feeling so I will always love that. I also really love how collaborative the television process is. It’s almost more collaborative in a certain way because after the actors are done so much happens – there’s editing and sounding and looping and ADR and all sorts of things that happen after the fact… the colour correction and all these sorts of things. To see the final product six weeks later and see all of the work those fine people have done is also a thrill in itself.

You’re a founding member of The Chicago Inclusion Project. How did that come to be and what is it all about?

The Chicago Inclusion Project aims to level the playing field for women, people of colour, LGBTQ community and people with disabilities in arts and media. Despite great achievements in equality over the years and representation, we’re still very, very, very, very, very far behind and people in disenfranchised communities are still at an unequal level of representation in the performing arts and media. A group of people got together to change that. We serve as a resource for companies who want to diversify their audience and diversify their ensembles and diversify their shows. We serve as a platform for people to make a complaint or provide compliments for companies that are either doing it right or not doing it right. We write, we review, we critique, we promote… we do everything we can to help the community be more inclusive and diversified in the stories they’re telling the audiences that they’re bringing in.

With the #MeToo and #TimesUp movements in America at the moment, and the focus on diversity, have you noticed any kind of impact from those movements in terms of what you were doing with The Chicago Inclusion Project?

It’s interesting. All of these movements are popping up at the same time and I think it’s because there’s something called intersectionality right? The first thing that was happening was Oscars so white and we were realising, ‘oh man people of colour are really at a disadvantage here’. The intersectionality of, ‘oh yeah there’s people of colour but then women of colour are even more disadvantaged’ so you see that and the women’s rights movement comes up more. Then you see, ‘oh well what about trans women?’ There’s so many intersections and these movements are popping up and I think it’s great. They all support each other and it all says that the status quo needs to change. We may not all have solutions. We may not all have perfect, tied up in a bow, resolutions but we can all admit that there’s a problem with the system and there are ways for us to talk about it and at least engage in discussion.

For you as an artist there’s no better kind of platform that’s leading the way when it comes to diversity and equality then Shondaland?

Exactly and that is why I’m so, so, so lucky and thrilled for How to Get Away With Murder to be one of my first TV shows. Not only do I get a chance to do good work but I get a chance to be in a show that actually is doing representation in the right way. Shondaland is a leader and a pioneer in that aspect.

What are the projects you have coming up this year?

I narrated a feature film called Hoop, which is about inner city Philadelphia and basketball. It premiered at the Ocean City Film Festival this last week. I’m looking forward to that film being on the film circuit. I’m also going to be appearing next season on several episodes of The Lion Guard, which is a Disney animated series.

Behzad Dabu can be seen in How to Get Away With Murder, which airs at 10pm Tuesday on Sky Living HD in the UK. For more information about The Chicago Inclusion Project visit https://www.thechicagoinclusionproject.org/.

Advertisement. Scroll to continue reading.
In this article:Behzad Dabu, How To Get Away With Murder, The Chi, The Chicago Inclusion Project