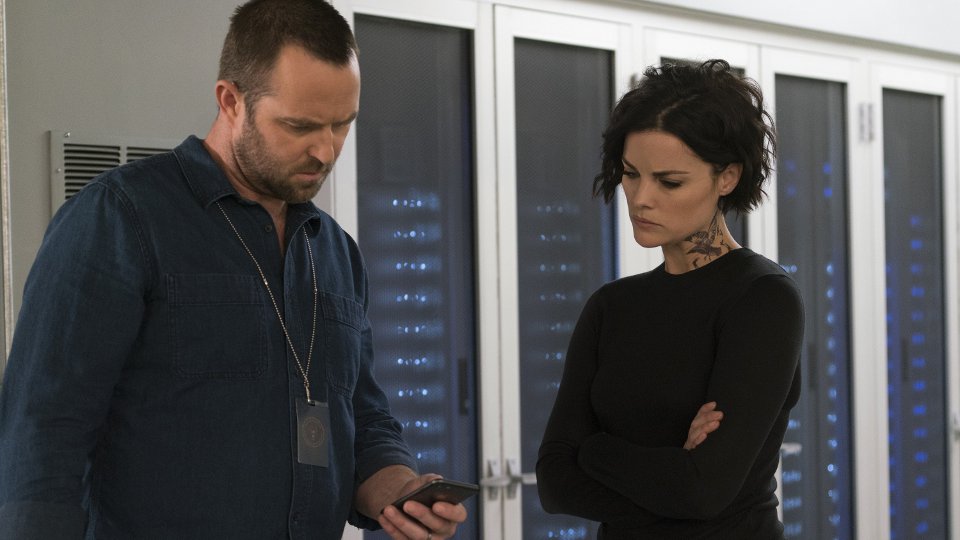 In the latest episode of Blindspot season 3, the team tried to recover some stolen NSA tech.

The episode opened up with a party at the NSA. One female employee sat working at her desk while the party was going. When it was clear, she opened the bases of several bobbleheads to reveal some hidden metal pieces. She then combined them into some kind of keycard that she used to hack a secure room. When she came back out she hid a small item she had stolen in her shoe. Finally she took a pill which caused her to collapse. Paramedics arrived and rushed her to hospital.

The action shifted to a conversation between Reade (Rob Brown), Zapata (Audrey Esparza) and Reade’s girlfriend Meg (Reshma Shetty). Zapata couldn’t believe that Meg wasn’t going on a month-long trip to Tuscany for a story. Zapata gave Reade a hard time about it but he asked her to drop it. Meg decided to tell Zapata the real reason she wasn’t going. She was in the US illegally and if she left it would be impossible for her to return. During the episode Reade tried to call in a favour to fix her immigration status but failed. He later told her and then took her by surprising and proposing to her. She said yes.

Meanwhile, Jane (Jaimie Alexander) sat drawing a picture of her daughter Avery (Kristina Reyes) because she couldn’t sleep. Weller (Sullivan Stapleton) got up and assured her that everything would work out. A knock on the door revealed Nas (Archie Panjabi) wanting help about one of Jane’s tattoos.

At the FBI, Nas briefed the team. She had intel that Hank Crawford (David Morse) was the funding behind Sandstorm. She explained that she found out while freelancing for Keaton at the CIA. Nas also had information that the Nergal virus has been stolen during a breach at the NSA. Patterson and Rich discovered the stolen device had been used to blow up a ship and auctioned off.

A calling card in the ship destruction video led them to Betty Dupree, an infamous hacker who used the handle ‘Pop Up Kid’. Patterson was able to trace her real identity as Delilah Dunny. Afterwards, Nas took Zapata aside and told her that Project Dragonfly was going to make her unpopular with the rest of the team.

Rich (Ennis Esmer) and Patterson (Ashley Johnson) traced the winner of the NSA device auction. It was a 16-year-old who was acting as a middleman. He refused to talk until they discovered he’d bought the device for Iranian terrorists. He explained what had happened and that he had been given a burner phone that Delilah was due to call to set up the trade.

When the phone finally rang, Rich answered and revealed his identity. Delilah didn’t believe him at first but he talked her round. Rich arranged the meet at a darkweb party he wanted to go to. He’d previously been denied twice by Reade. Delilah agreed and Reade was unimpressed with Rich. After discussion with the team they all agreed to go along with Rich’s plan.

Rich went to the party accompanied by Weller, Nas and Jane. When they arrived there was no sign of Delilah so they had to wait for her to arrive. She looked nervous about the deal and wanted to leave but Rich convinced her to stay and Nas took her to the bathroom. Just as things seemed to be going their way, Rich was spotted by criminal Sho Akhtar who also recognised the FBI team.

Patterson realised that Sho was probably there to steal the device. The team presumed that Sho wouldn’t know what Delilah looked like and wondered if they could use that to their advantage. They set him up by using Nas as a decoy while Rich kept Delilah out of the way. As ever, things weren’t so simple, Delilah ate some buffet food which triggered her nut allergy and Sho worked out that Nas was a decoy.

Weller used Delilah’s phone to ring her contact who was holding the device. Jane spotted the contact in the crowd as Sho spotted Weller. Sho pulled his gun and chaos ensued. When Weller got to the contact he found him dead and the device had gone. Weller went after Sho and had to take out some bodyguards.

Jane got to Sho first and tackled him to the ground and then the pair fought. Sho managed to get away, jumped on an ATV and fled. What Sho didn’t know was that Jane had pickpocketed the device during their fight. Back at the FBI, the team celebrated the win. After Nas left they discovered that she had switched the device for a dummy. Weller said she was probably using it to get back into the NSA.

Elsewhere in the episode, Roman (Luke Mitchell) was in Brazil with Blake (Tori Anderson). Roman told her he was suffering headaches while working on his next assignment (to kill the FBI team) for her father. Blake told him that they were going to get her father a new land deal after the previous one fell through. Her plan was to crash a high-stakes poker game with Roman posing as her bodyguard.

Blake talked her way into the poker game and then spent most of the night winning. At the end she lost on purpose and got herself invited to an after-party. Roman was a little jealous but agreed to go along with her plan. Before the party they were attacked and Blake was kidnapped while Roman gave chase.

At the end of the episode, Weller took a call from Nas. She told him that she had uncovered some interesting information about Avery’s father. He had some dodgy dealing with Crawford. Weller asked for the info but she had already sent it to his phone. Weller looked rather shocked as the episode ended.

Read our preview of Blindspot 3×14 Everlasting.