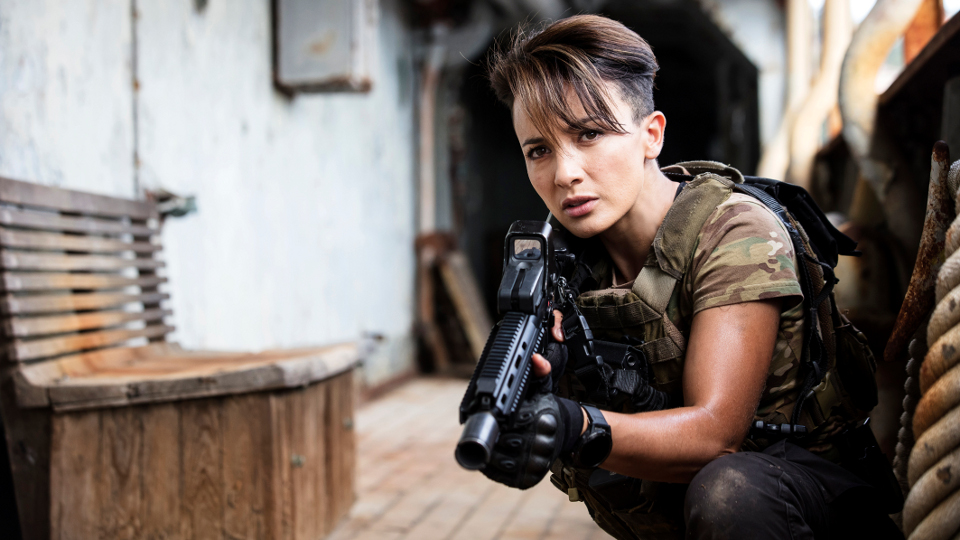 The latest episode of Strike Back, saw the return of two Strike Back legends.

Episode nine opened up with Section 20 pinned down on a motorway as they tried to escape with Omair Idrisi (Don Hany). They had to use the vehicles as cover as they fought back. The team calmed things down when Mac (Warren Brown) used Wyatt (Daniel MacPherson) as a decoy for Idrisi.

Novin (Alin Sumarwata) put Idrisi in a vehicle but Reynolds (Roxanne McKee) drove off with him herself. The rest of the team took out the attackers and then jumped in a vehicle themselves to give pursuit.

The next scene showed Jane Lowry (Katherine Kelly) and Donovan (Nina Sosanya) fighting. Lowry got the upperhand but it then became clear it was a flashback. Donovan was sending Lowry undercover to get close to Idrisi

Back in the present day, Reynolds checked in with Donovan. Reynolds was acting on Donovan’s orders to take Idrisi alone. Donovan told her that Jensen had died in an attack on their base. Meanwhile, Novin struggled to reach Jensen. She got an alert from Jensen’s automated system to his files. Taking a look she found out the truth about Project Tenebrae and told the team that Donovan and Lowry new each other. She could use his system to track Reynolds via her phone.

Reynolds car was rammed and Idrisi took off. She soon caught him up and the team also arrived on the scene. Reynolds explained that Donovan had given her orders. The team updated her that Lowry was a British agent. Idrisi thought they were joking until they showed him the pictures. Novin wanted to get in touch with Jensen but Reynolds told her the news of Jensen’s death. Novin wouldn’t believe her.

The team had no time to discuss further and had to move fast because more gunmen were closing in on their location. They fled to a nearby ship and tried to hold off the attackers. They soon became overwhelmed and Novin found herself blasted overboard. On deck, Mac, Wyatt and Reynolds were captured along with Idrisi. It was then revealed that it was Ives (Trevor Eve) who was behind the attackers.

Ives was upset that they had Idrisi who he said belonged to him. Idrisi told Ives that his wife had something called the Atlas. It was a list of every covert operation carried out by British Intelligence and it had Ives interested because of the money it could bring him.

Back with Donovan she took a call from her superiors and was ordered to take out Section 20. They feared the details of Project Tenebrae would be leaked. Donovan said she could take care of everything but was told to follow orders. She then met with Lowry.

Lowry was upset that Donovan had ordered a drone strike on Idrisi while she was with him. She explained that she wanted to disappear with Idrisi and the Atlas. Donovan said she wouldn’t use the Atlas because Idrisi would find out the truth about her. Donovan had a gun on Lowry and men sat watching nearby. Lowry detonated a car bomb outside and then escaped in the chaos.

Back with the team, Ives had Mac, Wyatt and Reynolds bound and weighted. He then had them pushed into the water to drown. Underwater the team couldn’t get free but were saved by Novin.

Novin had captured one of the attackers. The team strung him up and got ready to interrogate him. The man gave up the location of Ives straight away. Nearby they found a cache of guns, ammo and explosives.

Idrisi was now with Ives and he gave Lowry a call. He told her that he wanted the Atlas but she didn’t want to do a deal with Ives. Idrisi apologised for not giving her the life he promised. Ives then arranged to go and pick Lowry up. Lowry made an unseen call to a contact in her phone named ‘Camomile’.

Reynolds checked in with Donovan again and said she still had Idrisi. She suggested looping the team in but Donovan was against it. Instead she wanted Reynolds to bring her Idrisi. The team grabbed a couple of cars and set out with Reynolds and Novin going to Donovan and Mac and Wyatt going after Ives and Idrisi.

Reynolds turned up to meet Donovan and had Novin watching from range. Novin spotted that Donovan had men nearby watching. Donovan was annoyed that Idrisi wasn’t with Reynolds. Instead Reynolds asked about Lowry being a British agent. Donovan tried to explain how Lowry had gone rogue. She also revealed that she killed Jensen.

Reynolds asked for her men to step down but Donovan put them on amber alert. Donovan told Reynolds she had to make a choice but Reynolds wasn’t for joining her. Novin spotted Donovan signalling to her men and warned Reynolds. She grabbed Donovan as Novin gave covering fire.

Donovan managed to flee but Reynolds caught up with her. The pair engaged in some hand-to-hand combat but Reynolds came out on top. Donovan tried to talk her round but Reynolds put an end to her with a couple of bullets.

Mac and Wyatt took up sniper positions in a tower to watch Ives and Idrisi. They discussed who they would kill if they had a single bullet. Mac wanted Idrisi for killing his squad while Wyatt picked Ives. A car pulled up and Lowry got out and was finally reunited with Idrisi.

Ives asked Lowry about the Atlas and how she got it. Idrisi revealed that he knew that Lowry had been a British agent. Lowry admitted the truth to Idrisi but said she had chosen him instead. Ives became agitated and was losing patience quickly. Idrisi and Lowry kissed then she gave up the location of the Atlas.

Wyatt lost patience and said he was going to kill Lowry. Mac wasn’t sure but agreed to take Idrisi. Wyatt took his shot and killed Lowry while Mac missed Idrisi. They then had to flee and headed to the docks in pursuit of Ives and Idrisi.

Novin found herself pursued by several gunmen. She went into a museum and took some of them out before getting caught. She managed to take out another guy but was then surrounded by four more. The two behind her held guns to her head and a familiar voice asked if she had any last words.

It was Michael Stonebridge (Philip Winchester) and he was with Damien Scott (Sullivan Stapleton). The boys only had a brief scene but were on fine form. They killed the other two gunmen before fleeing with Novin. Hopefully they’ll have a bigger part to play in the season finale.

Read our preview of Strike Back: Retribution episode 10 which is the season finale.