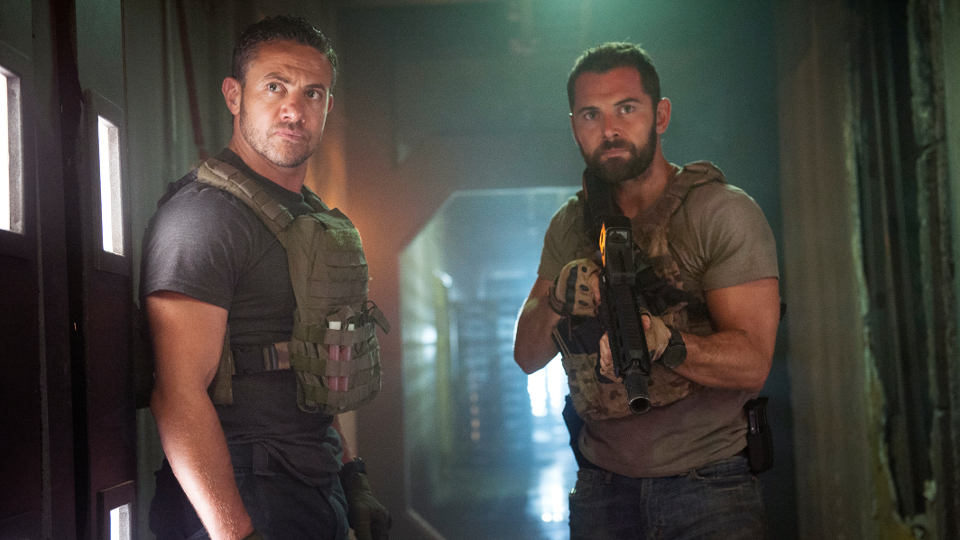 In the latest episode of Strike Back, things didn’t go to plan for Mac (Warren Brown) and Wyatt (Daniel MacPherson).

Episode eight opened up with with an assault on the black site where Omair Idrisi (Don Hany) was being held. It was Jane Lowry (Katherine Kelly) and she fought her way to Idrisi and then helped him escape. It seemed a little far-fetched and it was as it was all created in Idrisi’s mind as he was being waterboarded.

At the hospital Jensen (Phil Dunster) was up and about but still recovering from his ordeal. Meanwhile, Novin (Alin Sumarwata) and Reynolds (Roxanne McKee) were checking out a location in Germany where they found Rachel Sheridan tortured to death. Donovan (Nina Sosanya) went to speak to an American contact, called Colonel Parker, to find out about the black site where Idrisi was being held. She warned him that Lowry was coming and suggested he improve security.

Jensen asked Donovan about Project Tenebrae but she told him to look into it. He was a bit jumpy and pulled a gun when Novin and Reynolds came in. He told them he needed level 2 security clearance to do a job for Donovan so Reynolds gave him hers. Novin asked Reynolds for the room and grilled Jensen about why he was back at work.

Mac and Wyatt found the secure zone where Idrisi was being held. Before they could enter they encountered a metal detector which prevented them entering with their kit. Mac left his kit with Wyatt and went ahead alone. He observed some staff opening Idrisi’s cell and the alarms were sounded. One of the black site staff named Dr. Pryce was trying to extract him. Mac took a bullet to the arm and Wyatt came to try and help. Pryce injected Idrisi with adrenaline and began his extraction.

Back at base, Donovan told Reynolds that Colonel Parker was running his own op. She also quizzed Reynolds on why she had given her security clearance to Jensen. Novin asked Jensen why she had received an email from him while he was in the hospital. He explained that he had an automated program that sent it out if he didn’t check it every 24hrs and she was his trusted contact.

Pryce and Idrisi opened the cells to the other prisoners at the black site. Idrisi gave his word that they wouldn’t harm Pryce and then shot him dead through the face. Meanwhile, Wyatt was captured by the black site security. He updated them on what was going on while Idrisi and the prisoners tried to escape. Mac patched himself up but knocked something over, alerting Idrisi to his presence.

Mac fought off two of the prisoners before finding himself at gunpoint. Wyatt wanted to go and help Mac but security wouldn’t let him. Mac was taken and made to kneel before Idrisi before being placed on a chair. Idrisi grabbed a defibrillator and interrogated him about why he was there. Mac gloated about messing up Idrisi’s plans. Idrisi activated the intercom and demanded the doors be opened or he would kill Mac. He then began to shock him so Wyatt and security could hear his screams.

Wyatt couldn’t wait any longer so took out the security team and accidentally knocked out the guy in charge. He then tried to open the doors so he could get to Mac but locked the system. On the security cameras he saw Colonel Parker arriving.

Meanwile, Novin and Reynolds paid a visit to Colonel Parker’s residence and found his family inside. They also found Volkan who took Parker’s wife hostage. Novin went outside and placed a camera so should could see inside. She used it to line up a shot and killed Volkan.

As Idrisi continued to torture Mac, Wyatt made his way inside. One of the prisoners went up against Idrisi but Mac saved him. Outside, Colonel Parker came inside with Lowry’s team. He received an alert from Donovan via his Apple Watch letting him know his family was safe. When Wyatt arrived he gave a signal and a firefight broke out.

Mac and Idrisi spoke as they made their way through the facility. The prisoners were pursuing them and Mac had to save Idrisi’s life again. Meanwhile, Wyatt and Parker made their way inside while Lowry tried to force security to let them in. Eventually Wyatt caught them up and took Idrisi into custody.

As they tried to get Idrisi out they found Lowry trying to get in. Idrisi and Lowry saw each other for the first time since she thought him dead. Wyatt unloaded his clip at Lowry but bulletproof glass saved her. She finally got inside and came after Idrisi as Novin and Reynolds arrived on the scene. They left Colonel Parker and drove off with Idrisi.

At the end of the episode, Jensen updated Donovan while running a suspicious looking search on his laptop. He announced that he had cracked Tenebrae and Donovan said she’d told him to leave it. He opened up a file about a secret operation that revealed Donovan and Lowry had previously worked together. Before he could find out more Donovan placed a plastic bag on his head and suffocated him. Reynolds reported in that they had the package.

Read our preview of Strike Back: Retribution episode 9.