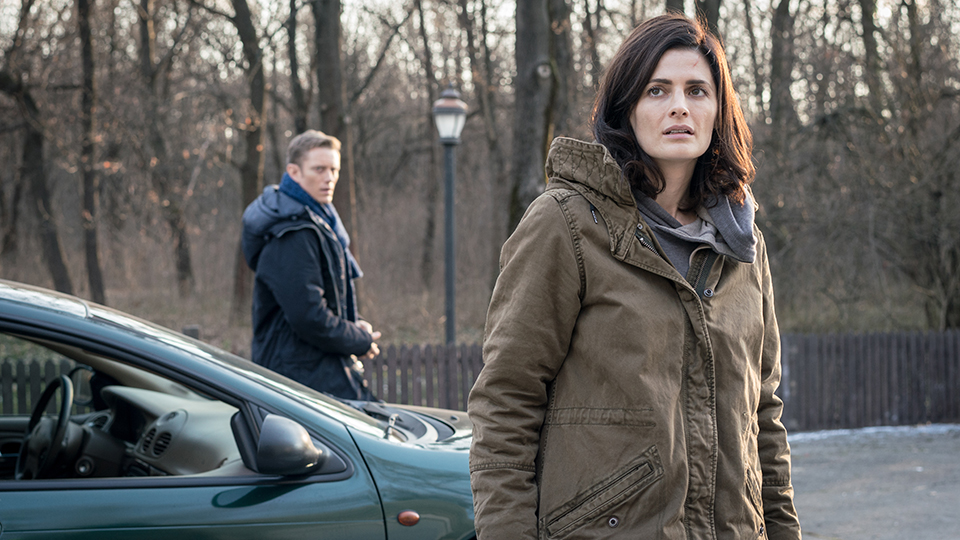 This article contains spoilers about the first episode of Absentia, Comeback, so if you’d prefer not to know what happens we suggest you stop reading now.

The much-loved actress who was unceremoniously dumped from Castle prior to it being cancelled by ABC, plays Special Agent Emily Byrne who disappears while hunting serial killer Conrad Harlow (Richard Brake). With no clue as to what happened to her and no body, Harlow was convicted of her murder and imprisoned leaving Emily’s husband Special Agent Nick Durand (Patrick Heusinger) and young son Flynn (Patrick McAuley) grieving and never knowing what happened to her.

The pilot jumps 6 years on from Emily’s disappearance and viewers are immediately shown that she’s actually alive but in grave danger. As she’s locked in a tank in an unknown location with water threatening to submerge and drown her, Nick receives a phone call seemingly from Harlow leading him to her. He, along with the FBI, arrives in time and Emily is rescued but the damage that her six-year ordeal has done is deep-rooted.

Nick has remarried and is now living with Alice (Cara Theobold), whom he raises Flynn with. Flynn was very young when Emily went missing so the sudden reappearance of a mother he never really knew is a huge adjustment for the youngster to make. When Emily enters back into the equation, the show deals with the fallout of moving on when there was never really closure and Nick’s guilt is already showing by the time the credits roll.

As for Emily, she has to deal with her husband having moved on and trying to connect with a son she never got the chance to raise. All the while she’s struggling to remember the events that took place during the 6 years she was missing, and her behaviour throughout the episode raises questions as to how bad her mental state is.

I won’t go further into the episode’s key moments as I don’t want to give away all of the surprises, and trust me there are plenty of them packed into the first episode. What I will say is that Absentia sets up a very promising story that promises to get a lot darker and much more emotional before the end of its 10-episode run. Emily’s ordeal, and what we learn of it in this opening episode, is deeply unnerving but you can’t help but be intrigued by what’s to come.

The show has a lot of promise. Unweaving the tangled web that exists around Harlow is going to be key as is filling in the blanks around Emily’s disappearance. Add to that the complicated situation she arrives back to where her family has moved on, and there’s likely going to be an emotional gut punch for some of the characters further down the line.

Absentia opens strong. The show has a stellar cast – both Katic and Heusinger are excellent – and the premise is one that quickly draws you in. By the end of the episode I couldn’t wait to watch the next one and I’m hoping that the payoff is worth the build-up. If you like your dramas dark and your thrillers tense, then Absentia will be your new favourite show.