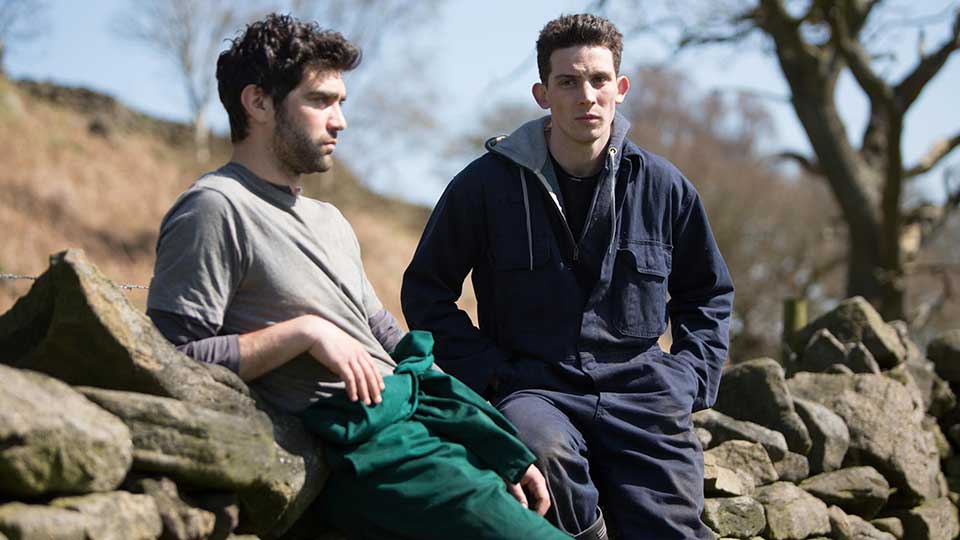 Johnny Saxby (Josh O’Connor) lives with his father Martin (Ian Hart) and grandmother Deidre (Gemma Jones) on a small farm in Yorkshire. Helping his father out during lambing season, Johnny relieves his frustrations with his life by having casual sex with strangers and drinking far too much. The arrival of Gheorghe (Alec Secareanu), who has been hired to provide an extra pair of hands on the farm, stirs up mixed emotions in Johnny and the two very different men find themselves drawn to one another.

God’s Own Country has picked up a wealth of critical acclaim following its theatrical release. The film is the debut of director and writer Francis Lee and it’s an affecting and emotional piece of cinema. It’s established at the very beginning that Johnny has a difficult relationship with his family. His frustrated father is hard on him and Johnny is all too aware that his father’s health is rapidly deteriorating. The pressure mounts further following Gheorghe’s arrival because Johnny has no idea how to interact with him other than to be aggressive and verbally abusive.

When Martin has a stroke, the daily running of the farm lands squarely on Johnny’s shoulders and following a near violent altercation with Gheorghe, Johnny realises that he he actually needs the help and support of his unwanted assistant. Lee’s handling of Johnny and Gheorghe’s relationship is masterful as the tension between them soon transforms into love, with Johnny completely unable to understand how to behave or conduct himself.

At the film’s heart is the development of Johnny’s character. The story is focused on his inability to move on from casual aggressive sex with strangers to something more rewarding and loving. His difficulty with intimacy is shown as all of his encounters are depicted as purely physical. Once he starts to act on his attraction to Gheorghe, he can’t even bring himself to kiss him (at least to begin with). Johnny is a product of his environment and his lack of social interaction makes him incredibly closed off to everyone around him.

God’s Own Country features strong performances from its small cast. O’Connor manages to make Johnny sympathetic, even when the character shouldn’t be, while Secareanu proves to be as talented as he is handsome as the mysterious Gheorghe. Hart and Jones, always reliable performers, make an impact in their small but pivotal roles.

Extras on the disc are limited to deleted and extended scenes along with the theatrical trailer. It’s a shame there isn’t some behind-the-scenes content as I would have loved to hear more about the movie from the mouths of the cast and crew.

God’s Own Country is an unconventional love story that is compelling and enjoyable. It avoids cliches instead opting for realism and heart. Johnny’s journey is an intriguing one and you’ll find yourself swept away by it once the movie begins. For me I could have done without some of the more gratuitous animal scenes, especially as I had to turn away at one point, but they do set the tone for the film. God’s Own Country is one of the finest British films I’ve seen in a long time and it deserves all of the acclaim its getting.