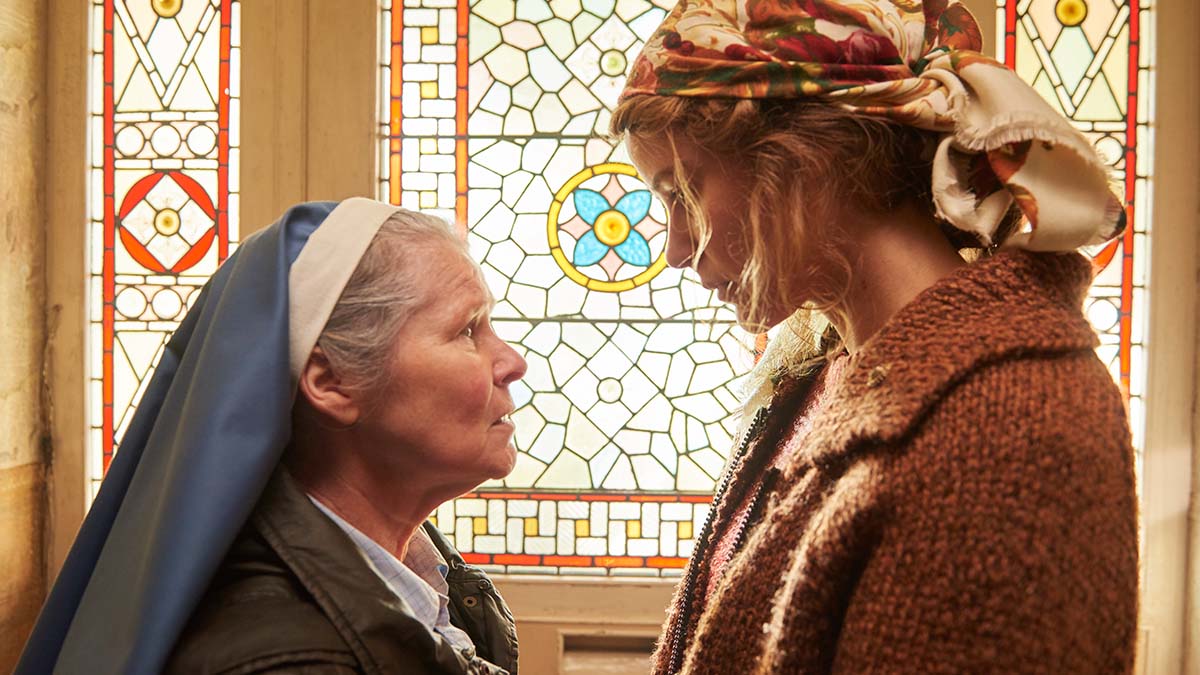 Former soldier Tomas (Alec Secareanu) finds himself homeless when the shelter he was staying in burns down. A chance meeting with nun Sister Claire (Imelda Staunton) offers up the opportunity for Tomas to move into a home with Magda (Carla Juri), a young woman who is caring for her dying elderly mother, as long as he helps with the upkeep of the house. Jumping at the offer, Tomas moves in but the rotting house around him combined with his own PTSD from his time as a soldier creates an unsettling feeling that he can’t shake.

‘Amulet’ is the feature film debut from writer/director Romola Garai, who is best known for her work as an actress in the likes of ‘Atonement’ and ‘Suffragette’. With this film, Garai has crafted a psychological slow-burn that’s not going to be for everyone but it does highlight her potential as a film-maker. The story is one that unfolds incredibly slowly as the viewer is invited to see glimpses of Tomas’ past as well as his present. Frequently the film jumps back to Tomas’ time as a solider where an encounter with Miriam (Angeliki Papoulia), a woman seeking refuge, reveals that he may not be as charming as he appears when we first meet him.

In the present timeline, Tomas moves in with Magda and quickly begins to fall for her, despite the odd situation of her mother being locked in the attic. The old woman’s moans are heard throughout the house but Tomas appears to put all that to one side so he can have his free room. Even the dilapidated state of the house, which is literally crumbling around him, doesn’t seem to ring any alarm bells about the situation he’s voluntarily walking into.

For me, the premise of the film was one of the stumbling blocks. While I can appreciate that Tomas wouldn’t want to look a gift horse in the mouth given that he hardly has any other options, it seems illogical that he would move in with a random stranger on the suggestion of a nun he barely knows. Once he gets his first glimpse at the dying mother, he still remains unshaken in a situation that would send anyone else running for the door and never looking back.

Garai’s screenplay touches on a variety of issues including the patriarchy and immigrants, but it never finds a strong enough voice to pass a clear point of its own. So much of the film is left open to interpretation that it’s hard to find any hooks to sink your teeth into. Despite the issues with the screenplay, Garai gets solid performances from her cast including a strong turn from ‘God’s Own Country’ star Alec Secareanu. She also does manage to unsettle the viewer but that unsettling feeling never ends up amounting to a great deal unfortunately.

‘Amulet’ has potential but for me, it doesn’t really deliver on its promise. The film looks great and it’s clear that Garai has a stylish eye, but the story moves so slowly that it’s not going to play well with audiences. Add to that an ending that takes the film completely into the surreal, with very little warning that’s where it’s going, and viewers will likely be left cold like I was. There are ideas in here that work, and Garai has definitely mastered how to create an unsettling atmosphere, but the payoff isn’t a big enough reward for the patience you’re required to trade to get to the end of the film.