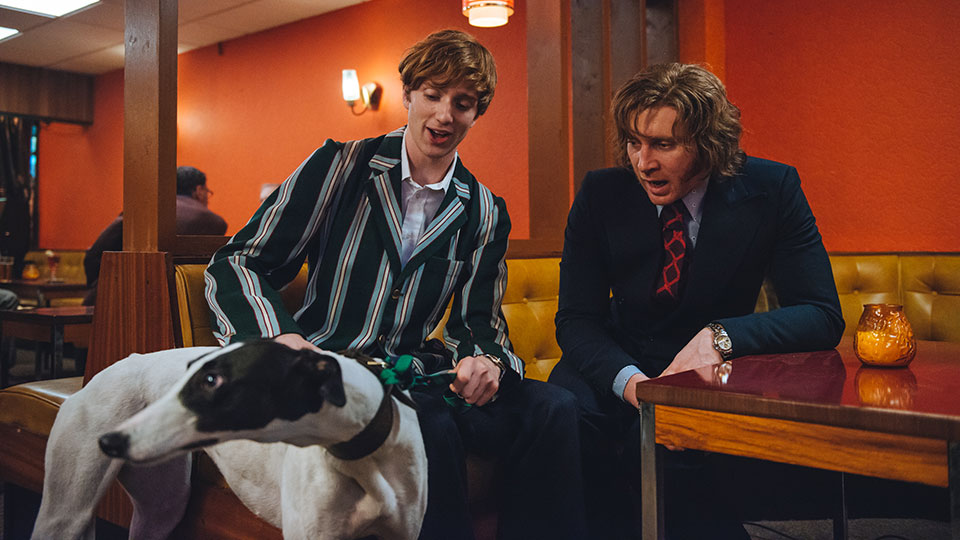 Derek ‘Dusty’ Springfield (Luke Newberry) feels like an outsider in his family. Contrasting sharply with them, he’s an academic who likes to watch foreign-language films and listen to classical music. In his local pub one day with his brother Little Eddie (Ben Batt), Dusty happens upon a stray greyhound, who gets named Slapper, and he forms an immediate bond with the animal to the dismay of his father Big Eddie (Ian Hart). Working with Slapper and realising she can run very fast, Dusty attracts the attention of two thieves who set their sights on stealing her so they can make a fortune.

Dusty & Me is set against the backdrop of Yorkshire in the late 70s and it’s a very authentic recreation of the North during that time. From the costumes to the sets, the film-makers have done an impressive job and it really adds to the overall feel of the film. The central story of Dusty & Me is a well-worn trope in cinema – an outsider finding his place in the world – but director Betsan Morris Evans ensures that it never feels stale or too familiar. The inclusion of a dog adds another layer to the film giving it all the makings of a classic British feel-good drama.

It’s the relationship between Dusty and Slapper that forms the heart of the film. As they quickly bond, Dusty manages to slowly get his family on board and catches the eye of local girl Chrissie (Genevieve Gaunt), who he has a crush on. When Slapper is kidnapped by two lowlife criminals, it’s Chrissie who steps in to support Dusty and help him find his beloved four-legged friend. While that’s a little spoiler, it doesn’t reveal what happens after that point, which is a fun and engaging romp with plenty of heart.

Luke Newberry, best-known for In the Flesh, is excellent as Dusty. He plays the character in a warm and endearing way, and you can’t help but root for him. Lesley Sharp is hilariously brash as his well-meaning mother Lil while Ben Batt gives a surprisingly layered performance as Dusty’s gobby older brother Little Eddie. Genevieve Gaunt makes a good impression too bringing a softer edge to the film and fostering believable chemistry with Newberry.

Dusty & Me is the kind of film that you can watch with the whole family and it’s a wonderfully heartwarming story. It has elements of comedy and drama but generally keeps things quite light, which I liked. Dogs in films is a sure-fire way to get my interest but I really felt that Dusty & Me told a compelling story that made me invest in the characters and care about the outcome. Add to that the faithful recreation of life in Yorkshire in the late 70s and Dusty & Me is a real winner. I really hope people take a chance and discover this film because they’ll absolutely love it.