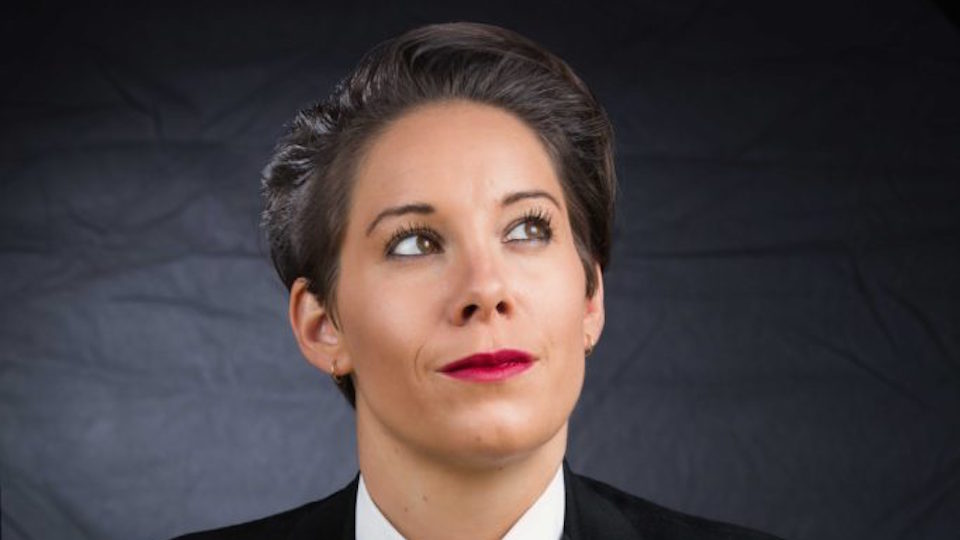 Like a breath of Edinburgh fresh air Suzi greets each of us individually at the door of the venue, immediately grounding us in the room and placing us at ease. Although a small act of pleasantry, this gives an audience a stake in the performance and we feel fully engaged with the human being in front of us.

Make no mistake, Suzi Ruffell is an excellent communicator. With boundless energy she galvanises the audience with generous helpings of her electric personality. She makes her connection with the audience look easy and we are in the palm of her hand. It feels like we are catching up with a long lost friend.

Keeping It Classy / Off The Kerb Productions

Warm atmosphere created, Keeping It Classy kicks in. Shifting tone, we are poignantly reminded that life has a way of coming at you when you least expect it. Suzi reveals she’s had a traumatic start to the year, making the memories of the universally scorned 2016 year of calamity feel like we collectively ordered a Coke and got Pepsi instead.

We are drawn in to Suzi’s seamless art of storytelling, no doubt honed from the conversational boot camps of her Christmas family get-togethers. She recalls the characters that ebb and flow into her life as she embarks on the London metropolitan elite catalysed by a relationship with a middle class ‘free spirit’.

The loss in a short space of time of two close relatives including her incredibly supportive nan (by all accounts, a legend) alongside hitting a deer while driving and a long term relationship breakdown (beautifully described in its final throes as ‘returning countless times to a lit firework’), we realise how Suzi has been drawing on her roots in her time of need. Furthermore, how her forthcoming qualities and working class upbringing shouldn’t become erased in a quest for an aspirational London life.

The net effect of Suzi’s work is to question motivations for the socially mobile and the behaviours and attitudes encountered alongside or in spite of it. It’s possible to identify narrow lived-in experiences of London’s social extremes, revealing a failure to relate to fellow humans despite the city’s liberal reputation. There’s a particularly cringe-worthy account of her middle class best friend’s mother not only introducing her at gatherings as a lesbian but being unable to do so without sounding like she’s profoundly deaf. We also hear about a racist homeless man who wrongly implicates Suzi in his intolerant behaviour following a good deed. A pivotal moment comes when Suzi describes getting back on the dating wagon only for her and her date to be confronted by a creepy bloke in a nightclub, his face half lit up by his phone, in what becomes a joyous rediscovery of ‘Ruffell rowdiness’ as the aggressor is put back in his box.

The build up culminates in an exceptional joke finale that grabs you when you least expect it (I won’t spoil it by repeating it here). It was one of the most well-crafted endings of a comedy show I’ve seen. At the conclusion, we feel the injustice has happened to a member of our own family or a close friend.

Whether it’s on  TV, at Pleasance Courtyard or a chance meeting on the bus, Suzi is a perceptive comedy laureate with the ability to relate to any audience in front of her. She is a true storyteller with an outward looking zest for what makes humans tick and crafts her comedy around today’s big issues with nuance, humility and hilarity. A class act.