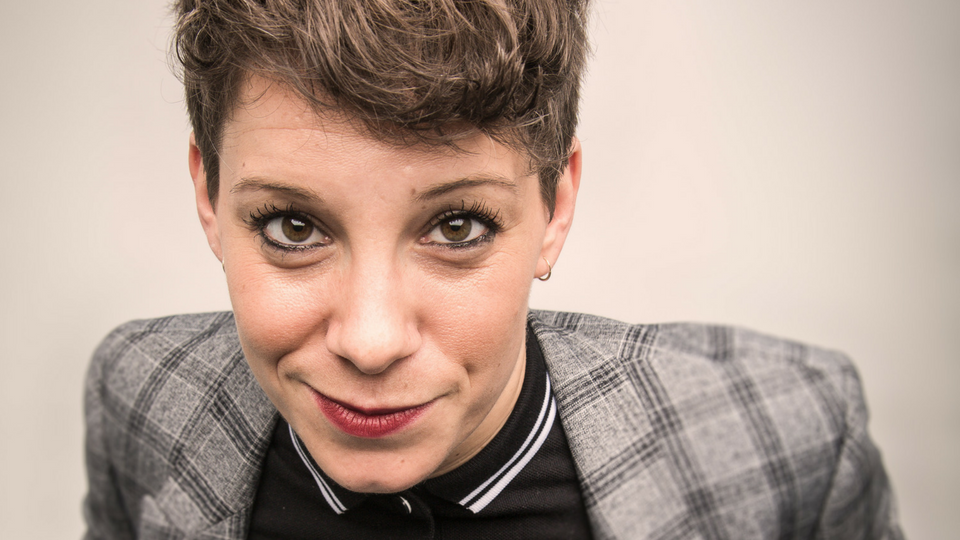 Suzi Ruffell’s fifth hour show Nocturnal at the fringe is a fresh, energetic and exceptionally well structured piece of comedy that immerses us in the last twelve months of the comic’s life.

Taking a deeper dive into Suzi’s world (not just into Barbara the giant stingray’s tank), we hear about the people, places and things that keep her awake at night. There is plenty of humour to be found in Suzi’s imaginative thought processes (maybe the strange neighbour Suzi lends one of her hammers to makes lamps out of human skin).

However, Suzi’s ‘filofax of fear’ stems from legitimate scenarios that can be exacerbated by the pressures of everyday life and encounters or actions of other human beings. The ignorant internet troll who won’t leave Suzi alone and the pervert monk in the Sri Lankan temple who sexually assaulted her and her girlfriend Alice on separate occasions under the pretence of a fertility ritual. Then there’s the Australian aquarium worker who wants to marry stingrays and the strange phenomena of combining childrens craft activities with penis straws at multi-generational hen dos.  There is also an hilarious deconstruction of nude dating programme Naked Attraction, which, the uninitiated in the audience find out is more horrifying than any Black Mirror episode. But it’s all happening now, not set in an imagined dystopian future, and its thanks to Suzi’s gift for comedy that we are laughing and not crying.

The backdrop to these stories are the homophobic environments not just in the countries Suzi has recently visited, but also systemic queer erasure in the film industry and lack of developed lead roles in Disney films (particularly resonant as this week’s news of Jack Whitehall’s casting as a gay Disney character has received a backlash not just for failing to cast a gay actor but for not giving the character a lead role).

There is also a surprise musical ending, which shows the versatility of Suzi’s talents and writing skills. Next year Suzi needs a bigger venue and deserves much more prominence at this festival. She is one of the few comedians I’ve seen at the fringe who prioritises consistent laughs over messages but seamlessly brings unique ideas and perspectives into her work with warmth that never fails to connect with all her audiences. It’s great to see the continued growth of Suzi’s career on stage and TV. She might be a born worrier but she’s also born to do stand-up.

Suzi Ruffell: Nocturnal at Pleasance Below (21:45) is currently sold out however a handful of tickets are released every day at 20:45.