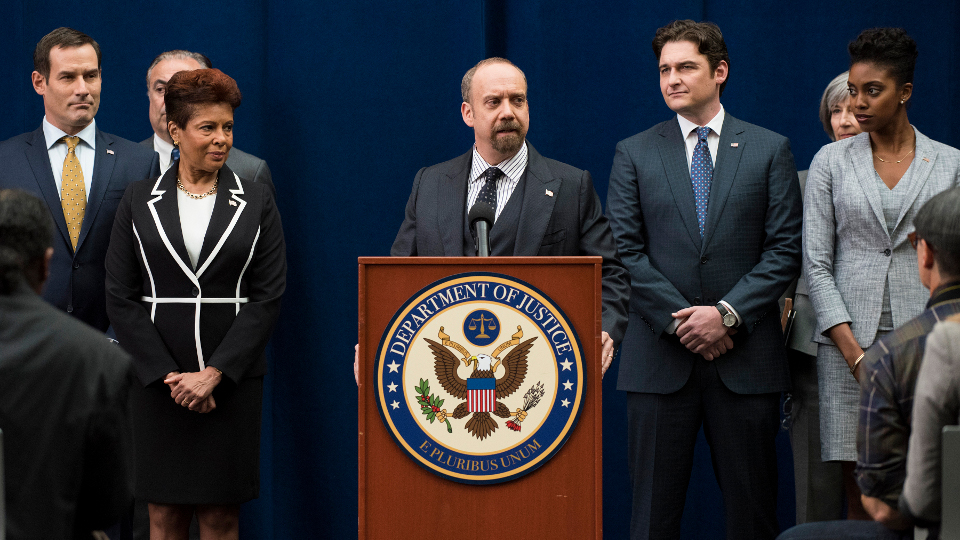 On the latest episode of Billions, Bobby “Axe” Axelrod (Damien Lewis) made moves to profit from the new planned casino.

The episode began with Axe bailing Lawrence Boyd for $5 million. He told Boyd that the only way forward to beat Chuck Rhoades (Paul Giamatti) was to listen to his previous advice. That was to do everything that Hall (Terry Kinney) said.

Later that evening Hall was waiting for Boyd as he stepped out for a sauna. Hall’s plan involved Boyd making several large payments for the sum of $2.5 million each to turn a witness back to his side.

Axe thought he had pinpointed the location for a new casino that was to be built in Sandicot. However there was a problem as a landowner was refusing to sell his 200 acres what were essential to the project.

Axe managed to buy his property for $5 million but later learnt that Sandicot lost the deal. It was all down to a phone call made by Chuck’s dad to sabotage the deal.

Wendy (Maggie Siff) paid a visit to Chuck at home and found him apparently a changed man. He seemed on top of everything and was great with the kids. He offered her a glass of wine and to stay for dinner and she agreed.

During their evening, Chuck was distracted several times by his lawyer Ira. Wendy went to see him later to see if everything was ok and he explained to her the pressure Chuck was under and just how much he was struggling.

Wendy decided she wanted her job back at Axe Capital and that she might be able to help Chuck in the process. She met with Axe and gave him her terms, she would return for a pay rise, the law suits dropped against Chuck and no sessions with Axe himself.

Axe appeared a little reluctant but suddenly agree to almost everything she asked. She then realised that the lawsuits against Chuck were his plan to get her to come back all along. She decided to still take the offer.

Chuck pushed Bryan (Toby Leonard Moore) to really focus on the Boyd case and to direct his anger at it. He gave a marvellous performance during jury selection which caused Boyd to push for a deal.

Boyd’s team proposed a deal but Chuck threw it out. Instead he planned to make an example out of Boyd. It impressed the Attorney General and resulted in Dake’s investigation being shut down.

Later when Chuck was celebrating his new victory streak he realised what had happened with Wendy. Instead of being happy at what she had done for him he saw it as yet another problem for their marriage and walked away from her.

Elsewhere in the episode, Lara (Malin Akerman) was furious at Axe not involving her in the decision to take Wendy back. He later made up with Lara by promising not to have sessions with Wendy and only use her for his staff. He kept from her that not having sessions with Wendy was decided by Wendy herself.

Watch the Billions 2×07 trailer below:

The official synopsis for Billions 2×07 reads:

Axe assembles a war room in the Hamptons following a disatrous setback, and seeks council on how to recoup his losses.