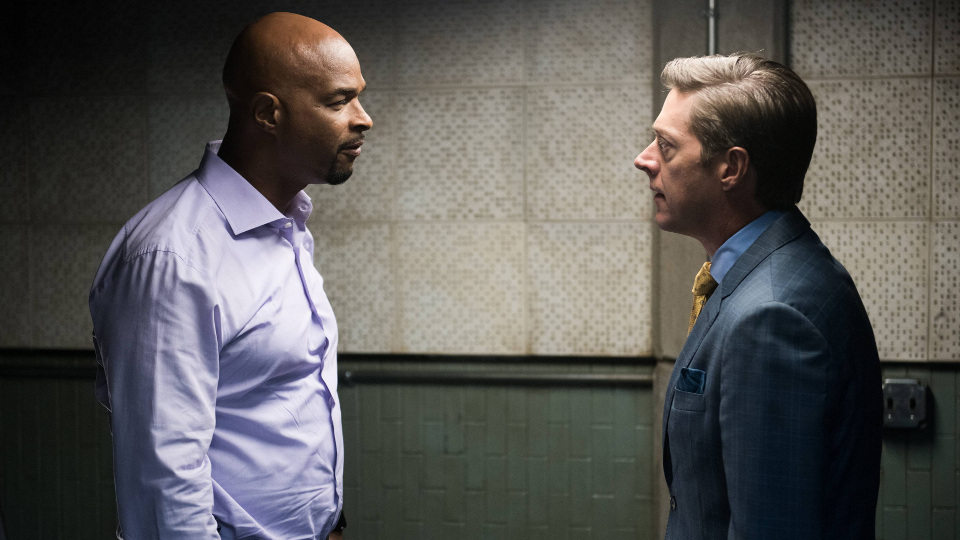 At the start of the episode, former navy seal Chad Jackson (Michael Raymond-James) attended an interview for a security guard job at a jewellery store. Unusually during the interview he asked for a drink of milk.

He was turned down for the job due to being overqualified. To make a point, that he’d do a better job than the current security guy, Jackson attacked him and smashed his face through several display cabinets. He then took some jewellery and left with the manager’s car.

At the precinct Murtaugh, Captain Avery (Kevin Rahm) and Dr. Cahill (Jordana Brewster) waited for Riggs. He didn’t show so they talked about Jackson. Murtaugh spotted Riggs outside walking along the edge of a nearby building.

Jackson next raided a pharmacy to try and identify some pills he had. When the staff couldn’t help him he went behind the counter to look himself. The police arrived on the scene and Riggs and Murtaugh went in to talk with Jackson.

Inside, Riggs found him sat drinking litres of milk. He was open to talking with Riggs but refused to stand down until he completed his current mission. Cruz (Richard Cabral) came in and almost got himself shot. This led to Jackson fleeing so Riggs and Murtaugh gave chase. He managed to lose them by leaping off a building onto a passing truck. Riggs worried that Jackson might be crazier than he.

At a meeting with Cahill they worked out that Jackson was part of a clinical trial. A visit to the company running the trial proved to be unhelpful.

Meanwhile, at tip came in about a man littering the park with milk cartons. Murtaugh realised that was probably Jackson so they went to talk to him. Riggs tried to talk him down again and bring him in. Unfortunately he got away again when Murtaugh walking into a tripmine. Instead of calling the bomb squad Riggs tackled Murtaugh to the ground and saved his life.

At the precinct Bailey (Michelle Mitchenor) and Cruz met with a convicted demolitions expert. He looked at the images from the park and explained that Jackson was building a bomb that could level a building. Cruz took the information to Riggs.

The best bit of the episode was Captain Avery hearing that Riggs was calling for backup. Knowing something huge must be going down his orders were to ‘send everyone!’.

Riggs and Murtaugh went back to the company running the drugs trial. There they found the building being evacuated and got stuck in a lift. Once out they found Jackson with a bomb vest. This time Riggs did talk him down but a security guard shot Jackson in the shoulder. The bullet damaged the bomb and restarted the countdown.

Murtaugh grabbed the bomb and ran towards a window shooting. Riggs chased after him and the pair jumped through the broken glass. As they jumped, Murtaugh threw the bomb in the air and Riggs rolled onto his back. As they fell towards a swimming pool below, Riggs shot the bomb.

Elsewhere in the episode, Riggs opened up to Dr. Cahill a little about his time as a navy seal. He admitted to her that he’s often aware when he does crazy things.

Murtaugh played his daughter at basketball and was upset when he realised that she let him win. She was worried about his heart from his recent surgery.

Later, Murtaugh popped in to see Trish (Keesha Sharp) at work. He found her with a younger guy called Desmond who he kept calling Denzel. She had hired him as her new assistant but Murtaugh found himself jealous.

At the end of the episode, Riggs went to visit Jackson in hospital to tell him the murder charges were being dropped. He brought Dr. Cahill with him to help talk Jackson through his problems.

Watch the trailer for Lethal Weapon 1×06 Ties That Bind below:

The official synopsis for Lethal Weapon 1×06 Ties That Bind reads:

When Riggs and Murtaugh investigate a high-profile case surrounding the murder of a young model, they uncover a vicious secret behind the locked mansion gates of one of LA’s wealthiest families. Riggs gets a jolt from his past when he discovers that an old friend of his wife has ties to the case. Back at home, Murtaugh is shocked to hear that his daughter is sending promiscuous photos to her new boyfriend.