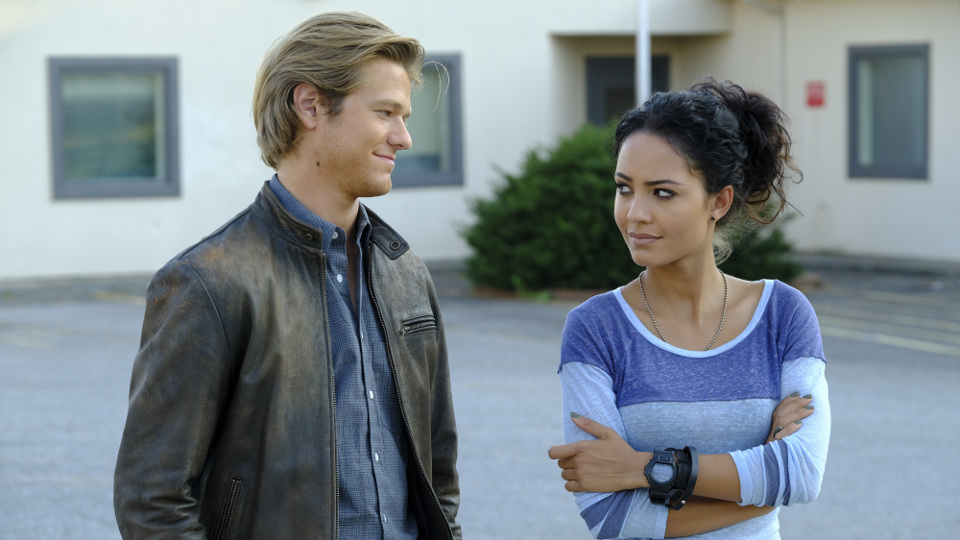 On the latest episode of MacGyver, Mac (Lucas Till) went up against an old nemesis known as The Ghost.

The episode opened up with Mac, Jack (George Eads) and Riley (Tristin Mays) trapped in a car that was stuck in a hole. To make things worse the hole was being filled in by a digger meaning they had only minutes to escape before the oxygen supply ran out. Mac quickly used parts of the air bag system to break the windows allowing them to escape.

Back at base, Thronton (Sandrine Holt) trained with Riley until call from FBI interrupted them. Agent Charlie Robinson wanted help from Mac to look at a suspicious device found near the United Nations.

The device looked like a crude bomb but once Mac investigated he discovered it contained a more sophisticated bomb inside. Opening it up activated it giving Mac just minutes before it went off. He rushed it outside, placed it on a manhole, then covered it with two bomb disposal jackets and a large metal bin. He than placed a car next to it to absorb the blast.

They deduced that it could only have been created by one person known as The Ghost (Niko Nicotera). Mac had a flashback to five years earlier during his time in Afghanistan when his training officer was killed by a device created by The Ghost.

The bomb meant that The Ghost must be operating on U.S. soil for the first time. A close inspection of the debris showed fragments of glass from a camera and a sim card. Mac suspected that the bomb was livestreaming video back to The Ghost.

Riley was able to track his location. She headed out with Mac and Jack to find him. Before entering the suspected apartment, Mac dismantled a phone and used the camera from it with chewing gum and a penknife. He used it to look inside before opening the door and spotted a guy sat in a chair with his back to the door.

Jack managed to kick the door in but the man had escaped via the window. He’d been watching the United Nations on the TV and the video stream from his earlier bomb on a laptop. Mac noticed a strange smell and found plastic explosives inside the laptop.

Riley began copying the hard drive and they took the machine outside. Before it exploded Mac was able to apply diesel to dissolve the explosives and disarm the bomb.

On the drive from the laptop Riley found ten years of files. Mac found a video from his time in Afghanistan and requested to watch it alone. It showed the death of his training officer who stood on a pressure plate which detonated a bomb. Mac vowed to find The Ghost and put him away.

Other files on the laptop led them to a warehouse but it exploded as soon as they arrived. Inside they found a body but Mac was convinced it wasn’t The Ghost. They decided to head to the United Nations to try and find him.

Mac spotted a suspicious truck and the team raced to it. They spotted the Ghost and Jack jumped into the truck in pursuit. However he didn’t stop to think and ended up activating a pressure plate inside. Jack had to stay still while Mac looked for the bomb.

At the end of the episode, Mac visited the family of his training officer. He met his daughter Annabelle and fixed the wings on one of her dolls.

The next episode is Can Opener, the official synopsis for the episode reads:

MacGyver is tasked to go undercover as an inmate in a maximum security prison to break out El Noche, a notorious drug kingpin, using only batteries and salt, and track him to his cartel’s secret location and dismantle it.

Advertisement. Scroll to continue reading.
In this article:MacGyver, Sky 1