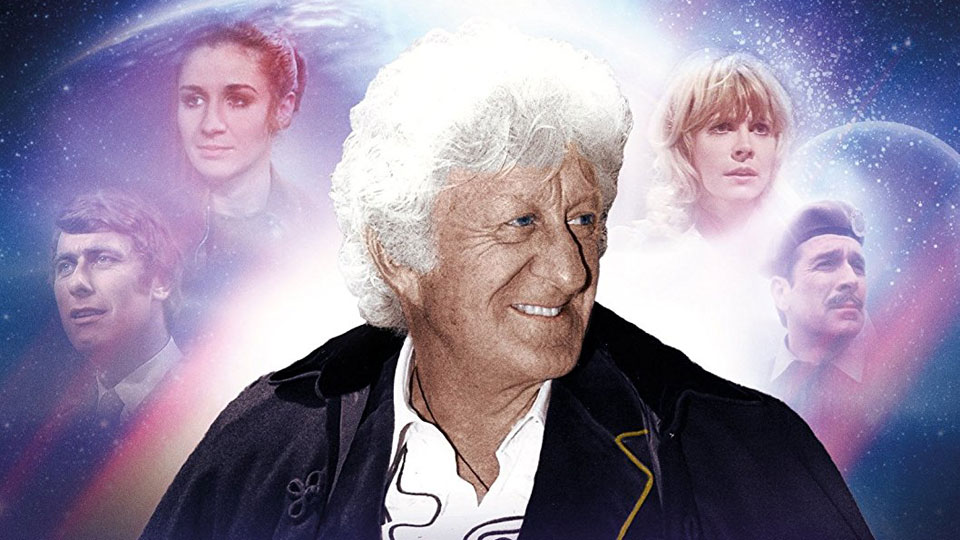 Doctor Who fans may well be insatiable for insight into the minutia of their favourite TV show, but there are occasions when peeking behind the scenes is really worth it. The Doctors: The Jon Pertwee Years is an extraordinary collection of six hour-long interviews with the stars of the Third Doctor’s era. Filmed in the 1980s and 1990s, the actors were speaking a decade or two after their period on the show, with enough time having passed to be candid, and to let down the guard…

The introduction teams up director (Keith Barnfather) with presenter (Nicholas Briggs – a familiar name to fans of the Doctor Who remake too), and through the banter and camaraderie comes the obvious poignant truth: the interviews in this release have preserved for posterity the personal reminiscences of the actors involved – half of whom (Jon Pertwee, Nicholas Courtney and Caroline John) are now dead.

Looking at these interviews in the present day is a fascinating experience. You have to keep reminding yourself that they were filmed longer ago from today than making Doctor Who was to the reminiscing actors at the time. Briggs’ introduction also sets up that he was nervous and inexperienced to begin with, and the feature with Nick Courtney splices together an early interview (not wholly successful, but at least at the Mawdryn Undead locations) with a much later one, where they are both relaxed in each other’s company and Courtney’s delicious dry sense of humour shines through.

The same nervousness (or it it awe, or a combination?) is evident in the interviews with Jon Pertwee – though he was such a consummate showman and storyteller that there’s never a dull moment. Pertwee is filmed at his home, wearing his velvet jacket from Planet of the Daleks, and later backstage at the Albert Hall preparing to go on as Worzel Gummidge – and he gives an interview in character! He reels out the old favourites – being expelled from RADA for refusing to play a Greek wind; being second on the shortlist to play Doctor Who… I could have listened all day.

Every interview in this release is incredibly charming and made with love, humour and a genuine desire to create something lasting, featuring the actors at their homes or on Doctor Who locations. Older Doctor Who fans may remember the conventions – but this release is like distilling all of the fan circuit stories in one place. They go further than that, too. The interview with Caroline John is arguably the most moving of the collection and she talks about her childhood and motherhood (having been pregnant whilst filming Doctor Who). She is taken around various locations that were used during her four stories. The sun finally comes out at Marlow weir, and John relates a grounded, mature view of her time on the show.

Every interview has plenty of merit, but they are enjoyable disparate too. While Caroline John is refined and self-contained, Katy Manning is (as ever) a live wire and a bundle of mad fun as she talks to Briggs in her dressing room at the theatre. The two most eccentric members of the UNIT team don’t disappoint. Richard Franklin speaks originally from a converted chapel in Wensleydale that happened to be his home at the time; while John Levene, with an American accent and something of the evangelical preacher about him (presumably acquired during his time in the States) is in turns barmy and sweet.

The only criticisms you could level at the interviews is that they don’t feature any clips from Doctor Who, only still photos (they were made by an independent production company, not the BBC) and that the sound and picture quality is variable, with lower definition than we’re used to in these hi-def days. But they often include childhood photos of the stars and you come away with a very real sense of having glimpsed the real person behind the character, which is what all successful interviews should do.

This release will only be of interest to the niche market of fans of 1970s Doctor Who. But to those fans, this collection offers definitive interviews with the six major stars of Jon Pertwee’s time on the show, including the great man himself. Briggs is a genial, witty interviewer, who manages to never make it about him. They are made by fans, for fans, and their lasting appeal pays off the debt of gratitude owed to Barnfather and Briggs for making them in the first place. Thanks, you splendid chaps.

The Doctors: The Jon Pertwee Years isn’t just a nice addition to your collection, it’s essential.