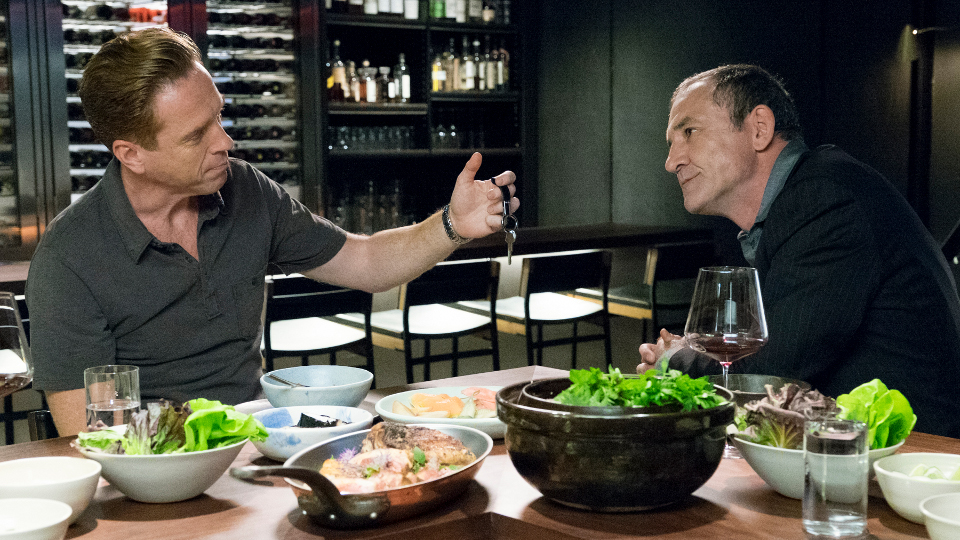 On the latest episode of Billions, Bobby “Axe” Axelrod (Damien Lewis) worked on changing his reputation to improve his chances at acquiring an NFL franchise.

To do so, Axe met with Sandy Benzinger (Richard Thomas) who runs The Giving Oath charity. It encourages wealthy people to sign up and pledge to giveaway much of their fortunes for good. It didn’t feel like the kind of thing Axe would do and afterwards it was revealed he was just after the photo op to get people talking about him.

Chuck Rhoades (Paul Giamatti) was struggling to find much to help him take down Spartan-Ives. Instead he decided to change tactic and tricked Lawrence Boyd (Eric Bogosian) into thinking he was in the clear. His plan worked as Boyd went straight back to his old ways.

Elsewhere in the episode, Wendy (Maggie Siff) met with the CEO of a company called Farpoint. He was Billions version of Elon Musk with plans to carry out a manned mission to Mars. Wendy was there to carry out a psych evaluation on a female astronaut who was in the running for the mission.

Later Wags (David Costabile) was sent by Axe to get help from Wendy. After his latest bender he awoke to find a new tattoo of Yosemite Sam on his ass. Wendy told him that he would need to make an appointment like everyone else.

At the end of the episode, Axe and Chuck found themselves together in a room for the first time since the end of last season. The meeting was for Axe to seek damages against Chuck. Instead it turned into plenty of off the record insults. Chuck poked fun at Axe needing to rebuild his office while Axe questioned Chuck about how his marriage was going.

During the meeting Benzinger called to tell Axe he knows he was using him as a photo opportunity. He was very upset at that and he also had news for Axe that the NFL deal was dead. After the call Axe stormed back into the meeting and accused Chuck of losing him a pro football team.

Watch the Billions 2×05 trailer below:

The official synopsis for Billions 2×05 reads:

Chuck, Connerty and Sacker rely on an anxious insider who is willing to wear a wire; Axe’s numbers take a big hit, so he scouts ideas for a quick financial play with a huge payoff; Wendy rediscovers her passion for her former job at Axe Capital when she works with an old colleague; the realities of expanding Lara’s business come between her and Axe.