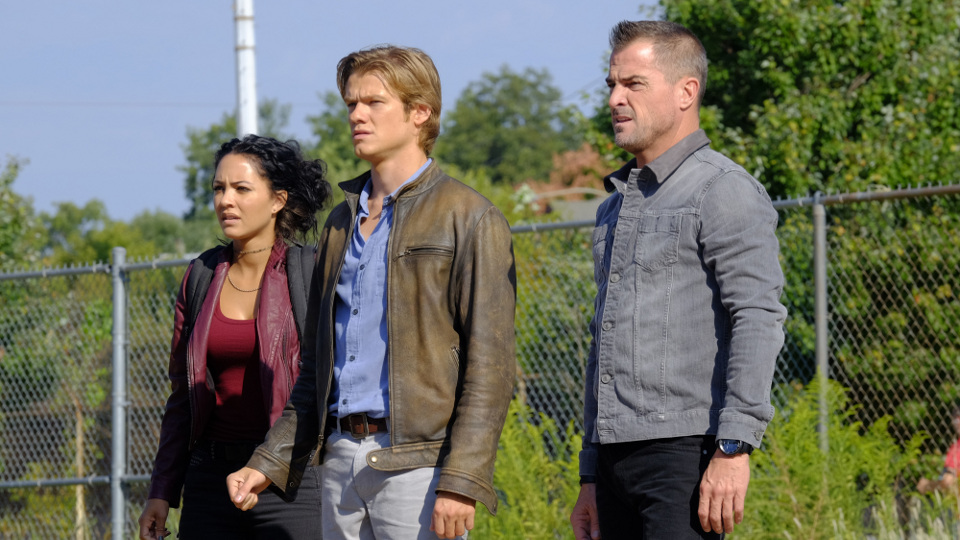 On the latest episode of MacGyver, Mac (Lucas Till) followed a tip about Nikki and took an eventful train journey in Germany.

The tip about Nikki led them to an apartment in Portugal. Mac and Jack (George Eads) were watching the apartment when a woman arrived. She told them that Nikki asked her to give them a key. Mac took a look at it but didn’t recognise it.

Thronton (Sandrine Holt) called Mac and Jack with a new mission and told them to meet Riley (Tristin Mays) in Germany. Their the trio were tasked with protecting a woman named Katarina Wagner.

Katarina was due to testify against her boss who was selling weapons to enemies of the U.S. She has been sent an email by Interpol to take a train to Frankfurt but it had been intercepted and men were sent to kill her.

After a game of cat and mouse on the train against the men, Mac modified an electric shaver into a taser. He left Katarina locked in a bathroom with the taser as protection. She later used it to save Riley’s life.

After killing some of the men, the others had modified the train to speed up with no way of slowing it down. They were then airlifted to safety. Mac cooked up several plans and got to work.

Using a metal pipe, armrests containing magnesium, rust and a flare he was able to make a cutting tool. He use this to try and separate the rear carriages and save the passengers. Unfortunately it ran out of fuel before he was finished so he and Jack jumped to the front and levered it off. .

As the rear portion of the train slowed down, Mac and Jack were trapped on the front. Mac climbed below the cabin and swapped some wires to force the motors to spin backwards. This had the desired effect of slowing the train and it came to a gentle stop at Frankfurt station.

Elsewhere in the episode, Bozer (Justin Hires) continued to flirt with Riley in an attempt to get her phone number. She seems to be warming to him and admitted that he was somewhat cute, much to his delight.

At the end of the episode, Mac went to Nikki’s apartment again to see if he could find something that the key opened. He tried but failed so instead decided to wear it around his neck.

The next episode is Wrench, the official synopsis for the episode reads:

Using only a wrench and rope, MacGyver must diffuse a bomb set near the United Nations by his old nemesis, “The Ghost” (Niko Nicotera), a notorious criminal whose work killed his mentor, and track him down before he strikes again.