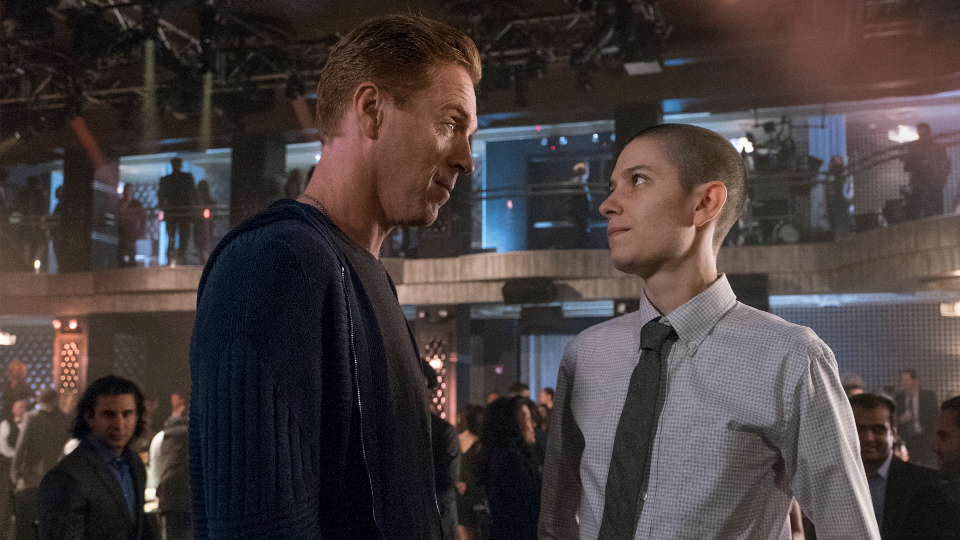 On the latest episode of Billions, Bobby “Axe” Axelrod (Damien Lewis) was invited onto a Global Thought Leaders panel hosted by Lawrence Boyd. Krakow, the rival hedge-fund manager who offered Wendy a job last episode, was also on the panel and boasted about how he carefully made his money. Axe couldn’t help himself and laid into him about a large fine he had to pay in the past.

Axe eventually stormed off but later went to apologise to Boyd. He wasn’t bothered though as Axe exploding was what he had hoped for. Axe was not amused.

Back at the office, Maffee (Dan Soder) introduced Axe to Taylor (Asia Kate Dillon). Axe gave Taylor two minutes to explain a discovery. They had spotted that one of Krakow’s companies had been using satellite images to uncover information on various companies. These images could be used to make investment decisions. One company that had a microchip factory looked to have big activity due to the movement of trucks. They proposed that it was maybe a shell company and the images were being used to trick the investors into parting with their millions.

At the end of their conversation Taylor explained to Axe that they had been their three months and would be leaving in two weeks. Later Axe, explained how Taylor saw things differently and they would be very valuable to the company. He offered a million dollar salary to tempt them to stay.

Meanwhile, Chuck Rhoades (Paul Giamatti) decided not to give in to the pressure from Axe. He worked on a plan to make it impossible for the Attorney General to fire him. He tasked his team to find him a huge case that would be near impossible to win.

Elsewhere in the episode, Axe’s right-hand man, Wags (David Costabile) had a meltdown at a sushi bar. He was very upset when some younger customers disrespected, in his opinion, the chef and the art of sushi.

Wendy (Maggie Siff) found herself on the wrong side of Charles Rhoades Sr. (Jeffrey DeMunn) when he discovered that they had seperated. She also had to deal with Oliver Dake (Christopher Denham) questioning her over the $5 million bonus that he felt looked like a bribe. Later her advice to Chuck made him choose to go after Boyd.

At the end of the episode, Boyd found himself in need of Axe after Chuck decided to come after him. Axe is the only person to ever get the better of Chuck. After giving Boyd a grand speech it looks like Axe will be going up against Chuck again soon.

Watch the Billions 2×03 trailer below:

The official synopsis for Billions 2×03 reads:

Bobby sets his eyes on buying an NFL franchise, while Lara launches her own business venture. Chuck makes a last ditch effort to nail a big case.