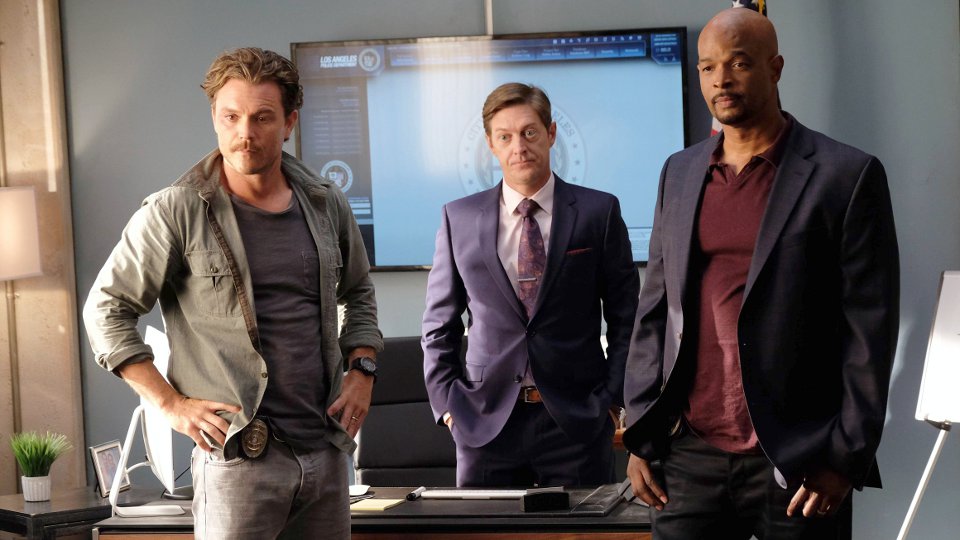 On the season one premiere of Lethal Weapon we were introduced to Martin Riggs (Clayne Crawford) and Roger Murtaugh (Damon Wayans).

The season opened up showing ex-Navy SEAL Riggs working as a cop in Texas in pursuit of some criminals. He was called by his wife Miranda (Floriana Lima) who had gone into labor. Riggs stopped the pursuit and took out the baddies out with an impossible shot from a sniper rife.

On the way to the hospital, Miranda was in a car accident that killed both her and the baby. The action then moved forward six months showing Riggs had moved to California and spent his days in his trailer, drinking and contemplating suicide.

Elsewhere, family man and LAPD Detective Murtaugh is going back to work after a near fatal heart attack. His doctor has told him he needs to keep his stress levels under control which he is able to monitor with a device on his wrist.

At the precinct he was paired up with his new partner, Riggs. They were called out to a hostage situation at a bank. Inside masked men were holding hostages at gunpoint. As the police created a perimeter, Riggs decided to just wander in which took the gunmen by surprise.

They threatened Riggs and had him kneel while he attempted to talk to them. With Murtaugh and the rest of the police listening Riggs suggested the gunmen could improve their situation by killing a high value hostage. He also suggested that killing him would be perfect as he’s a cop.

Before they decide what to do, Riggs grabs a gun and kills all the gunmen in a blink of an eye. He was rather pleased with himself before realising he had also managed to trigger the countdown on one of their bomb jackets. He quickly evacuated the hostages and calmly walked out of the building.

Their next case was an apparent suicide. Upon investigating they realised things weren’t as they seemed and that the man may have been executed and dumped. They decided to pay a visit to the Port where the man had worked.

While there, Riggs spotted a cartel tattoo on the neck of a worker. This resulted in them having a fight before the guy fled by car. Riggs and Murtaugh gave pursuit and in the chaos ended up in the middle of the Grand Prix. During the pursuit they caused lots of expensive damage.

Eventually Riggs jumped out of Murtaugh’s car onto the roof of the suspect’s car. After failing to shake Riggs off, he was knocked unconscious by Riggs. It wasn’t the most sensible plan as he was driving and the car was still going at speed so Riggs was forced to jump to safety. As Riggs and Murtaugh went to apprehend the man he stepped back into the road and was killed by a bus.

Back at the precinct they got a proper telling off and the Captain (Kevin Rahm) told them he would find someone else to take over the case. Murtaugh wasn’t happy with Riggs’ death wish and Riggs suggested that Murtaugh get a safer job.

Later Riggs paid a visit to Murtaugh’s home where his wife Trish (Keesha Sharp) invited him to stay for dinner. The whole family warned to him and when he revealed his wife’s death Murtaugh began to understand him more.

Realising they still had until the morning to solve the case they decided to try and put it to bed. They went to check the body at the morgue and then Riggs went to see the dead man’s wife. She wanted him to go away but he got into her house and spoke to her again. She revealed that she was being watched and that the cartel wanted some heroin back. They had also taken her son as insurance.

Back at his trailer, Riggs geared up for an assault on the cartel. Murtaugh came by and said he wanted to go with him. Riggs tricked him and handcuffed him to a rail then left him there to keep him safe.

Riggs walked right into the cartel and demanded the boy be released. They showed the boy but demanded the heroin in exchange. Just before things went bad there was a big crash as Murtaugh came flying through the window in Riggs’ truck. He then shot many of the cartel members as the rest fled, including the leader.

Outside the leader took them by surprise and shot Riggs in the arm. He, Murtaugh and the boy took cover. Riggs cooked up a plan to walk out of cover so that Murtaugh could shoot the man back when he revealed his position.

Realising Riggs might get himself killed, Murtaugh shot him first in the foot. As Riggs went down the shooter revealed his position and Riggs shot him dead.

At the end of the episode, Riggs called in again on the Murtaugh family to give a bottle of whisky to Murtaugh as a thank you gift. Trish invited him in and he revealed to Murtaugh that although he had a deathwish he couldn’t kill himself as Miranda would be ashamed of him.

Watch the trailer for Lethal Weapon 1×02 Surf N Turf below:

When Riggs and Murtaugh respond to a noise complaint, they are drawn into a major case involving illegal gun runners and advanced military technology that involves Riggs personally.