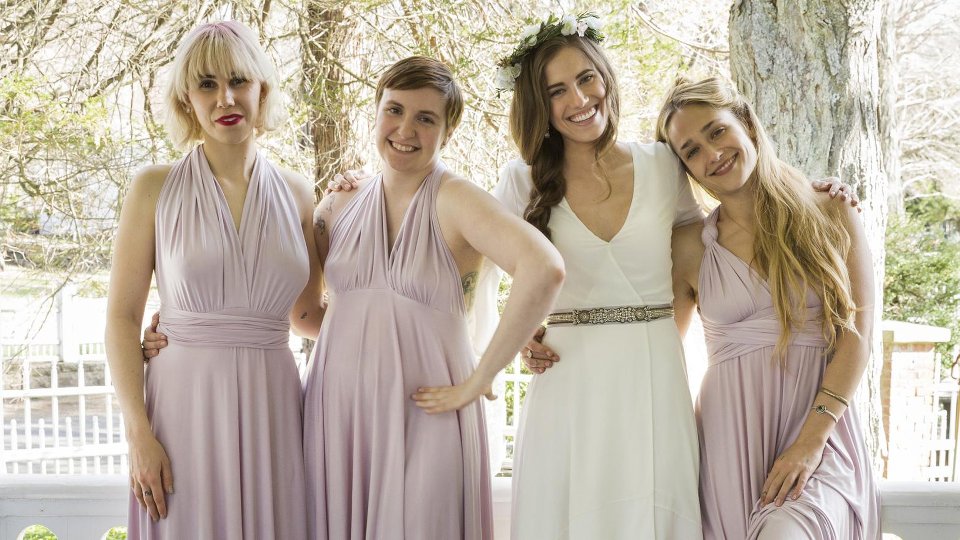 Lena Dunham’s critically acclaimed comedy-drama Girls is coming to an end this year with its sixth season, which is due to premiere in February. Ahead of the final season, the fifth season has been released on Blu-ray and DVD so fans can rewatch it or catch-up in time for the final hurrah. When fans last saw Hannah (Lena Dunham), Marnie (Allison Williams), Shoshannah (Zosia Mamet) and Jessa (Jemma Kirke), things were on the verge of changing with Hannah embarking on a relationship with Fran (Jake Lacy) and Shoshannah preparing to move to Tokyo.

Season five opens with Marnie’s wedding day as she prepares to marry her boyfriend and band member Desi (Ebon Moss-Bachrach). The episode is pivotal because it brings the main four characters together for the first time in what feels like ages. While Marnie micro-manages the wedding to within an inch of its life, the other girls try to ensure that things run smoothly while poor lovelorn Ray (Alex Karpovsky) tries to offer support to Desi despite being in love with Marnie still.

From that episode onwards things get messy once again and the four girls are pulled apart as they explore their own lives and storylines. The dynamic is slightly off as Shoshannah spends a large part of the season starting a new life on Tokyo so she’s mostly kept away from the storylines of the other characters. Marnie spends the season adapting to life as a married woman and quickly realising that she may have rushed in, Hannah continues to fumble through life without any clear aim or direction, and Jessa grows closer to Adam causing problems with Hannah in the process.

One of the issues there’s always been with Girls is that none of the characters are particularly likeable. Marnie and Hannah are perhaps the most unsympathetic and if you weren’t a big fan of them in previous seasons, you’re not going to be won over during season 5. At times I even wondered why these four people ever became friends in the first place and you can’t help but feel they may have done better in life by cutting ties with one another.

The one thing you can’t criticise the cast for is holding back. All of the four leads throw themselves into their roles and they truly embody the characters they are playing. They do manage to foster some genuine moments across the 10 episodes, even if the characters spend most of their time at odds. Zosia Mamet continues to be the standout in the cast and her kooky portrayal is endlessly entertaining.

If you’ve stuck with Girls this far then you’ll likely enjoy the latest season. The show is as unfiltered as ever and it’s not one for the easily offended. I thought it was the best season of the show since season one and I’ll be pretty sad to say goodbye to Hannah and co when that time comes later this year.