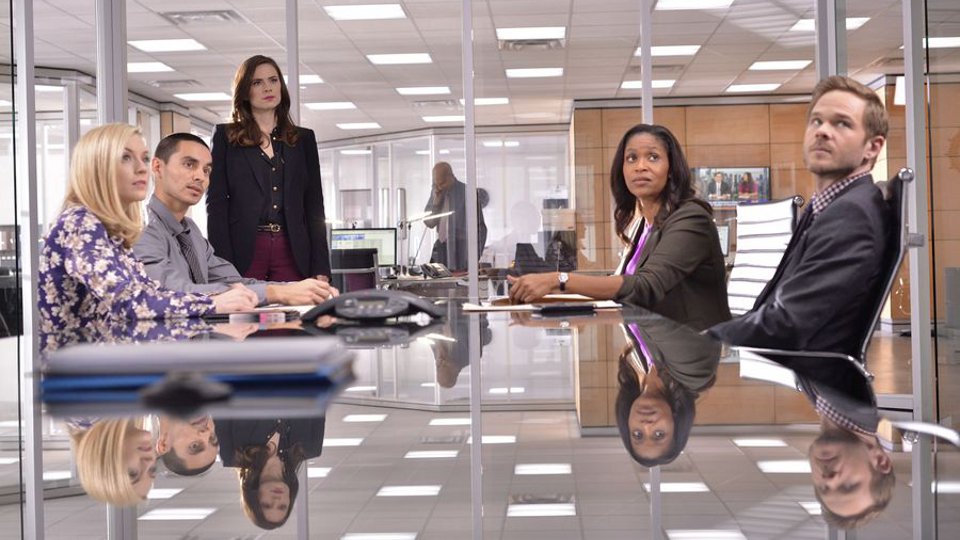 The latest episode of Conviction, Hayes (Hayley Atwell) and the CIU team took on the case of the convicted Black Orchid serial killer, Clark Sims.

He was in prison for the murder of several woman who were bludgeoned to death and their corpses were left wearing Black Orchid lipstick. They took the case when another woman wound up dead in the same circumstances.

Tess (Emily Kinney) was particularly interested in the case and took lead after revealing she had a fascination with serial killers. She requested to meet with Sims and found him to be a very unusual chap. He suffered from bad OCD and Asperger’s.

Sims had become used to prison life and feared change. So much so that he gave a radio interview where he confessed to being the Black Orchid Killer in order to stay inside.

Due to the new murder the team had to work closely with the NYPD. Including an old colleague of Maxine’s, Detective Nick Cestero (Berto Colon).

Frankie (Manny Montana) did some experiments to prove that Sims didn’t have the power in his arm to bludgeon the women to death.

Elsewhere in the episode, Wallace (Eddie Cahill) and Hayes continued their relationship. They struggled to separate their private lives from work and failed miserably at talking about anything else.

At the end of the episode, after finding the team determined the real killer, Sims walked free from prison.

The next episode of the season is Enemy Combatant. Former President Morrison pays Hayes an unexpected visit and lobbies her (and CIU) to take on the case of Omar Abbas, a Muslim-American citizen held for years without trial in a military facility for allegedly planning a chemical attack on Manhattan. But taking on the federal war on terror is a hot-button issue, and Hayes and the CIU find themselves battling the authorities in their search for the truth. Meanwhile, just as Hayes and Wallace become more comfortable with their relationship, her father raises questions about the couple’s long-term viability.