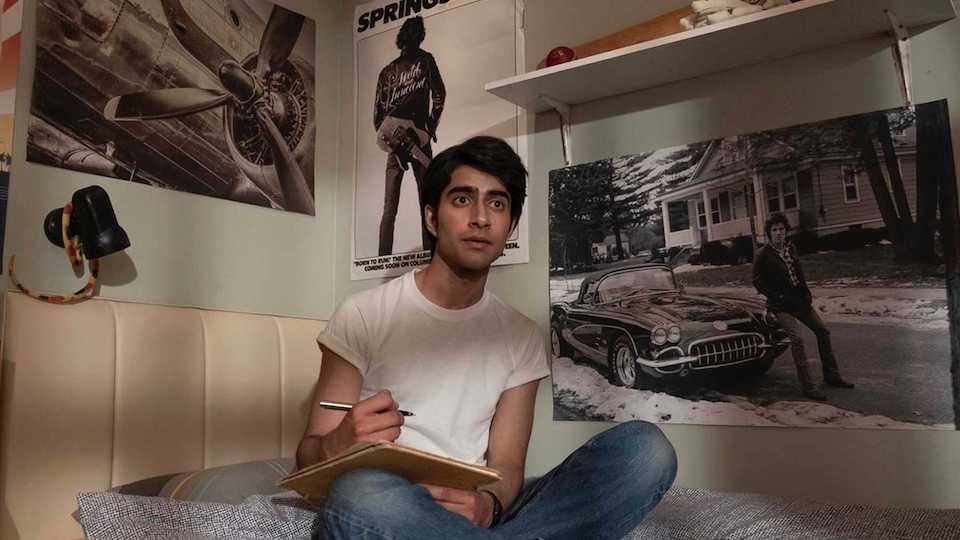 I remember the first time I heard Bruce Springsteen. As in, really heard him. I was massively into rock music as a teenager, but relatively oblivious when it came to Springsteen. Then one morning my Dad decided to dust off his copy of the Live 1975-1985 box set and wake up the house with the mighty sound of Bruce Springsteen & the E-Street Band. I was sat eating my breakfast when The River came on.

Those of you who have heard this album will know that this particular live recording of the song is preceded by Bruce telling a story about his relationship with his father around the time that kids his age were being drafted to fight in the Vietnam War. His storytelling is so vivid and cinematic and utterly heart-breaking, and I had never heard anything like it before. And then that harmonica intro kicks in. My mind was blown. Which is all a very long-winded way of saying that when it comes to Gurindha Chadha’s new film, Blinded by the Light, I can very much relate.

Based on the memoir Greetings from Bury Park: Race, Religion and Rock N’ Roll, by journalist Sarfraz Manzoor, Blinded by the Light tells the story of Javed (Viveik Kalra), the son of Pakistani immigrants, growing up in Luton in the late 1980s. Javed is a creative boy, he writes poetry and lyrics and dreams of one day being a writer. But like so many working-class people in Thatcherite Britain he feels trapped and frustrated. He aspires to do something with his life that will make a difference, but looks around at his small world of unemployment and racial intolerance and feels that he has been born in the wrong time and the wrong place.

Then his friend Roops (Aaron Phagura) introduces him to the music of Bruce Springsteen and it changes his life forever. The universal themes and working-class wisdom of Springsteen’s songs help Javed to make sense of his own life, and also inspire him to take his writing more seriously. The film plays as a classic coming-of-age tale, as well as being an upbeat romp through the glorious back catalogue of The Boss, but also has a lot to say about Britain in the late 80s, and British Pakistani life in particular.

You can tell that Chadha really cares about and understands her characters. She captures terrific little details, such as the day-time disco that the Asian kids have to go to because their strict parents would never let them go out on a Friday or Saturday night. The difficult relationship between Javed and his domineering father also feels authentic despite the familiar trappings.

With its humble setting, and observations of British-Asian culture, Blinded by the Light shares a lot of DNA with Gurinda Chadha’s breakout film Bend it Like Beckham, but with pop music instead of football. Chadha herself considers the films as spiritual companions. And just like Bend it Like Beckham, this film is feelgood and crowd-pleasing, but also formulaic, and even a bit clunky in places.

Yes, Blinded by the Light is flawed, and over sentimental, but honestly I didn’t care one bit. It reminded me of what it was like to hear The River for the first time all those years ago, and it was a beautiful thing to remember. If a rock song has ever changed your life, if you have ever felt that swell of emotion when a song connects with your heart, or especially if the music of Bruce Springsteen has a mainline to your soul, you are going to love this film.

The Blu-ray disc comes with a couple of short featurettes only. The first is a brief peak behind the scenes, with interviews with the cast and crew talking about the film. The second is a very quick look at the film’s triumphant premiere at the Sundance Film Festival.