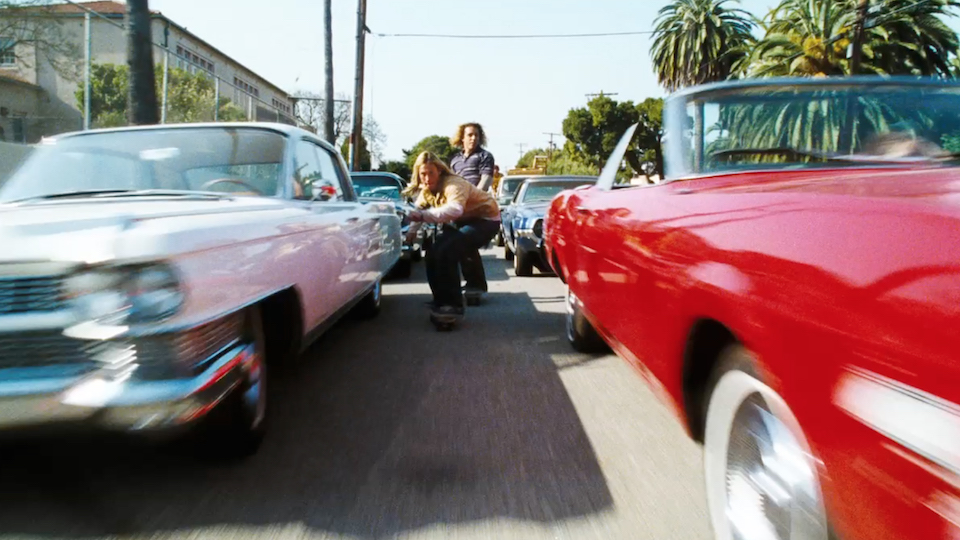 Lords of Dogtown tells the riotous true story of the Zephyr Skateboarding Team. Born out of the fiercely tribal surf scene in Southern California during the mid-70s, this motley crew of wild teens, and sun-bleached, pot smoking beach bums, brought surfing technique to skateboarding, and became pioneers of its emergence into mainstream culture. The Z-boys (as they became known) were the outsiders and rebels who blazed the trail for the superstars of the 80s and 90s such as Tony Hawk.

When there’s already a definitive documentary – the award winning Dogtown and Z-Boys – about the Zephyr skateboarding team, with archive footage and contributions from all the main players, it’s hard to imagine what a film, made only four years later can add. But the fiction manages to bring a real depth and emotion to the story. Written by Stacy Peralta, the director of Dogtown and Z-Boys (and one of the original Z-boys himself), Lords of Dogtown has a fierce authenticity, a believable voice, and a real sense of time and place. You can practically smell the sea, sweat, weed, and sex wax.

Stacy (John Robinson), Jay (Emile Hirsch), and Tony (Victor Rasuk) are three kids from the Pacific Ocean Park neighbourhood known as Dogtown. They live solely to surf and skate. Every day is the last day of summer to them. When local surf board maker, and shop owner, Skip Engblom (Heath Ledger) sees potential in these kids, he creates the Zephyr team, and starts entering them into competitions. At the time, skateboarding competitions were all about spins, tricks and flicks on flat surfaces. Then the Z-boys rolled up, with their surfing style, and changed everything.

All of this coincides with a serious drought across California. The sea is so calm there is no surfing anywhere. The lack of water means that pools are being drained across the city. Desperate for a surfing fix, the Z-boys realise that an empty pool is a place where the waves break 24 hours a day. They can surf in the bowl and ride up the sides of the pool. By breaking into back yards and skating in their pools, they essentially invented the modern skate park with half pipes.

Just as things couldn’t get any better for the Z-boys – fame and girls and offers of money – it all predictably being to fall apart. Girls come between them. Fame changes them. Better offers from rival teams divides them. Is this exactly how it went down? Maybe yes, maybe no, but either way it’s an archetypal narrative that is so familiar, it takes you out of the story and reminds you that you’re watching a film. Which is the only real flaw in an otherwise excellent film.

Directed with a visually beautiful verité style, and a keen eye for period detail, Catherine Hardwicke does a wonderful job with the material. The film is pacy, fun, and full of heart. The performances are solid across the board (pun intended), and the casting of the three main characters is bang on the money. Standout among them is Emile Hirsch as Jay Adams – the boy who stayed true to the scene whilst his friends sold out, became famous and earned huge amounts of money. Hirsch gives a compelling and sympathetic performance, as his isolation and resentment leads him down a path of drugs and gang violence.

This new release – on blu-ray for the first time in the UK – comes packed with extras including a cast and director commentary, deleted scenes, and 7 featurettes about the making of the film.