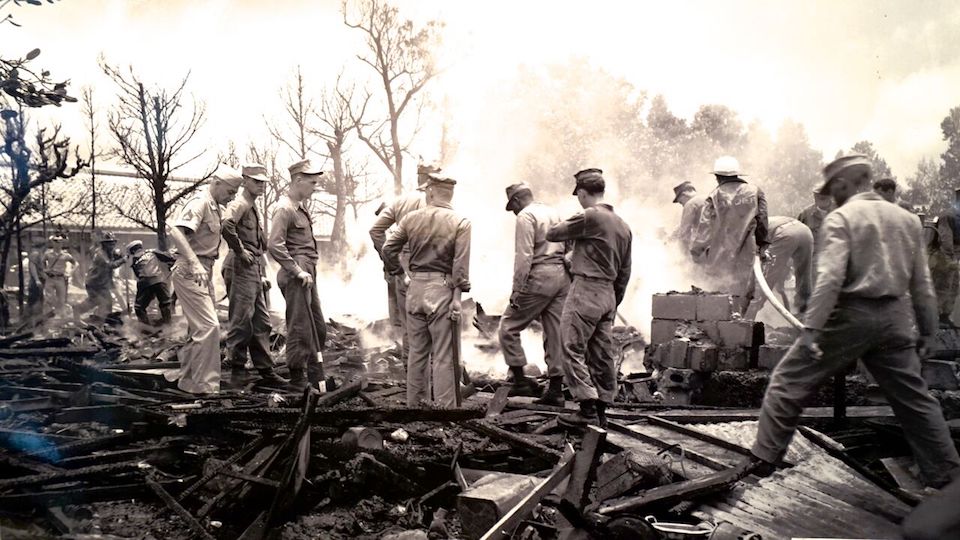 When a review screener is resent to you at the last minute with the words “updated following the election of Donald Trump” you know this is going to be interesting. Opening with images of the US military bombing and destroying all over the world, whilst the star spangled banner is triumphantly sung, it is abundantly clear from the start how veteran documentarian John Pilger feels about the subject of his latest film. And he’s not going to waste time being subtle about it.

America is spending trillions of dollars on weapons. And when that much is being spent, you need an enemy. Rather than deal with the real enemies of American freedom, such as their not-fit-for-purpose two party politics, or their undemocratic electoral system, they have created an enemy – and that enemy is China. A narrative has been created over the past 70 years that China is America’s great foe. So the US response has been to geographically isolate China – to surround them on land and sea with US army bases, warships, submarines, missile silos, and nuclear weapons aimed at their major cities. It is a noose of military power that is ever tightening around China’s neck.

Pilger wants his film to “break the silence. The US and China may well be on the road to war, and nuclear war is no longer unthinkable.”

In a truly disturbing first act, Pilger traces America’s atrocities in the Pacific back to the end of World War II when they claimed the Marshall Islands from Japan. This ring of tropical paradise was used as a testing ground for atomic weapons, which they dropped day after day for years. The island that took the brunt of this was Bikini Atoll.

In a dark, and very unsubtle aside, Pilger remarks that the swimsuit was named after the destruction of this island. The designer of the two-piece swimsuit hoped it would have the same explosive impact on culture, that the atom bomb had over Bikini. Pilger then shows us images of celebrity and lifestyle magazines, parading the ultimate bikini bodies. He then shows us what real Bikini bodies look like. Scarred, deformed, riddled with cancer.

This sequence provides a lot of context, but arguably too much. It’s an important subject, but for me felt like it could and perhaps should form the basis of a separate documentary. However it does effectively illustrate the US government’s attitude that the Pacific is theirs, and they can do what they like with it. Even if that includes turning a small group of tropical islands into the most irradiated place on Earth, and making guinea pigs out of it’s inhabitants.

Pilger then gets back onto the “narrative”. The millions of dollars made in the Chinese opium trade at the turn of the century, that helped build modern America. How this was halted by the emergence of Mao and the Communist party. How he frequently reached out to America, but was always ignored. The false ways in which China was perceived in America. How China believed that socialism shouldn’t mean shared poverty, and so they expanded commerce and industry, and in doing so became a capitalist superpower to rival, and even surpass the US. But this was their biggest mistake. Becoming a bigger deal on the world stage was unforgiveable.

As the film lurches into the final act there is a whiff of conspiracy theory about it, but it is delivered with such conviction, it is truly terrifying. What the rest of the world might view as economic growth and expansion, America views as “provocative behaviour”. So they move more ships into the area, build more bases, and point more missiles at major cities. What is the purpose of this? Where does it end? If you keep increasing your military presence, your warships, drones, bases, missile silos, special forces units – constantly tightening the noose around China, how long until someone gets nervous? Until someone gets an itchy trigger finger, and all life on earth is wiped out?

And now Donald Trump is president. In perhaps one of the most chilling cuts I have ever seen, Pilger takes us from the stark warnings of nuclear destruction, to Trump’s disgusting grandstanding at the Republican National Convention, where amongst his litany of vile rhetoric, he accuses China of raping America’s industry.

The Coming War on China is a very one-sided film, with barely any reference to China’s own crimes against the region. But that would be missing the point of Pilger’s film. He is fully aware that China has negotiated the best trade deals in the region, that their vast industrialisation has poisoned the planet and sped up global warming, and that their record on human rights is atrocious. Yet shouldn’t we be sitting around a table with them to discuss this, rather than pointing weapons of global destruction at them instead?

As Pilger tells his tale, his wry Aussie tone is always peaking through in his narration and in his interviews, especially when dealing with evasive American bullshit and bureaucracy. He particularly can’t hide his disgust at America for their crimes in the Pacific, and quite frankly, who can blame him. What Pilger presents in this film is shocking, terrifying, and disturbing, but absolutely essential viewing. Equally, he is clearly in awe at the small pockets of resistance around the world. The peaceful protestors in Korea and Okinawa, standing up to the mighty US.

The Coming War on China is a very persuasive piece of filmmaking. It may in places veer desperately close to being anti-American propaganda, but the facts – as Pilger presents them – certainly speak for themselves. For many of us in 2016, the world has never seemed scarier. And we now have the scariest film of 2016.

Advertisement. Scroll to continue reading.
In this article:John Pilger, The Coming War on China