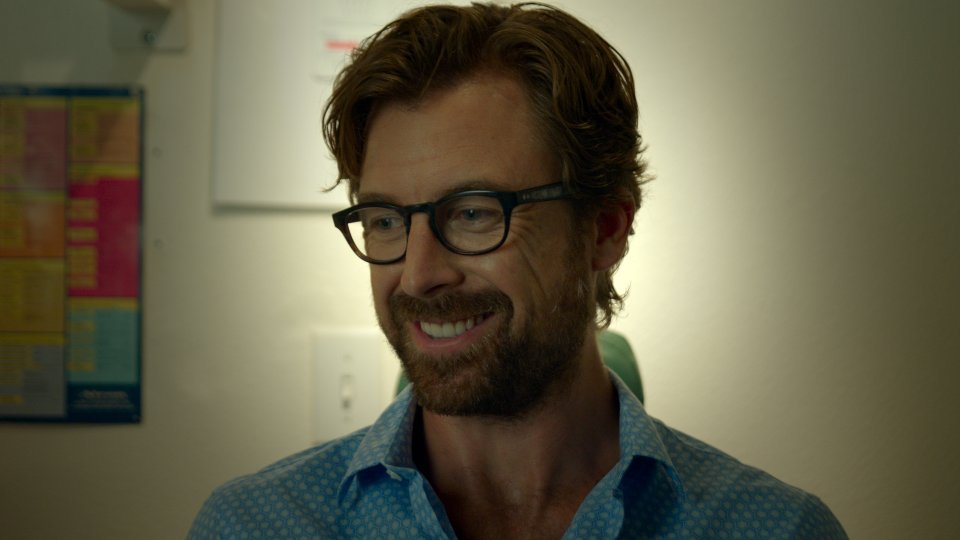 For the third and final of our Lazy Eye interviews we talk to lead actor Lucas Near-Verbrugghe.

Over the course of the past week we’ve spoken to his co-star Aaron Costa Ganis and writer/director Tim Kirkman. Lucas plays Dean in the movie, a man who confronts unresolved feelings from a past relationship years after it took place.

I chatted to Lucas to find out more about Lazy Eye, discuss his character Dean, and to find out the major differences between film and stage work.

Hi Lucas. How are you today and where does this Q&A find you?

Hi! I’m doing okay. The world is a little wonky right now post-election but I am thankful to be doing a play that talks about some of the issues we are facing and is also a comedy. I’m sitting in the green room of the Geffen Theater eating a sandwich as I write this.

Your latest movie is Lazy Eye. How would you describe the film?

The film is an intimate portrait of what happens when Dean is contacted by Alex, a lover of his who disappeared 15 years ago.

In the movie you play Dean. What do people need to know about the character before they watch the movie?

People don’t NEED to know anything before seeing the movie. I love not knowing any plot or details before I watch a film. But for all you graphic designers out there, this one is for you!!

In what ways would you say you related to Dean and the journey he goes on?

I think we can all relate to having to having to come to terms with the fact that your life maybe isn’t what you thought it was going to be 10 or 15 years ago. That isn’t necessarily a bad thing but it can trigger a moment of real deep introspection!

What attracted you to the role? Tell us a bit about how you got involved with Lazy Eye.

When I read the script I was immediately attracted to how complicated the discussion of love was. Tim wrote characters that are full of contradictions in the best way and that rang very true to my experience. I think I was going through some of that in my own life at the time and the film seemed like a great way to explore that deeper. I had coffee with Tim and we were both on the same page about the character, the story, and how we like to work, plus we both admired each other’s glasses and had beards so it was kinda like meeting a bizarro version of ourselves. But more than anything, there was a mutual understanding between Tim and I that was essential for me since I had never carried a film before and I wanted someone I could trust. I’m so grateful it worked out!

Your chemistry with Aaron Costa Ganis is off the charts. How did you create that with him?

We were lucky. We knew each other from New York. We both went to the NYU Graduate Acting Program and although we weren’t there at the same time we had had a lot of the same teachers. So right off the bat we shared a common way of talking about the work. But ultimately, I think we just genuinely enjoyed each others company. The vibe on set was very playful and we made each other laugh a lot. When it came to the love scenes I think we are both very open minded so we gave over to what the scene was which is two people who’s fire together burned very hot and who haven’t seen each other in a very very long time. We also wanted it to be beautiful and real and with the help of Tim and Gabe Mehan (our amazing DP!) I think we did that.

Tim Kirkman is at the forefront of modern gay cinema. What was your experience of working with him?

I loved working with Tim and I’m happy to consider him a friend now. First of all, Tim loves working with actors and he has a great understanding of when to be hands on and when to let something breathe. I learned a lot about my own acting as a result of working on this film with him. Tim is also a great collaborator and there was always sense that we were working together to tell this story in the best way possible and he valued our input.

What I think is special about this film and is a testament to what makes Tim a unique voice in gay cinema is that it’s driven by a story that isn’t about sexual preference but rather the human condition. Lazy Eye is about love and sex and loss and dealing with the past and it just so happens that the characters are gay. It’s a very universal story and many people, both gay and straight, have told me how much they relate to it.

I can’t wait to see what Mr. Tim Kirkman cooks up next!

You’ve done a lot of theatre work in your career. What would you say are the biggest challenges of that discipline compared to film acting?

One of the biggest challenges for me is that with film or TV, most of your preparation happens in a room alone. I really thrive off of working with other people which is what the theater is about. I love rehearsals and being able to explore different choices and I get inspired by seeing what other actors are doing in a scene. I love letting a character sink in over the course of serval weeks of living in the world of the play. And I also love what happens when an audience arrives and all your work takes another leap forward and comes into even sharper focus. When you’re preparing for a film you rarely get that experience (unless you’re working with Sorkin or Mike Leigh). So the work you do on your own is different. You have to come to the first day of shooting knowing your character so well and often never having seen the other person who is going to be playing your lover, or mother, or wife or whatever. We actually did get about a week of rehearsal for Lazy Eye which was great. Aaron and I treated that time like rehearsal for a play.

I’m in a play right now called Icebergs at the Geffen Theater in Los Angeles which runs until Dec 18th. It’s a touching comedy about climate change and how we make sense of our world in the wake of catastrophe. If you’re in Los Angeles come check it out! I also start shooting film called Snapshots directed by Melanie Mayron in 2017. So keep your eyes peeled!

I will be at home in San Francisco with my family. 🙂

Lazy Eye is available on DVD now through Breaking Glass Pictures. Watch the trailer for the movie below: