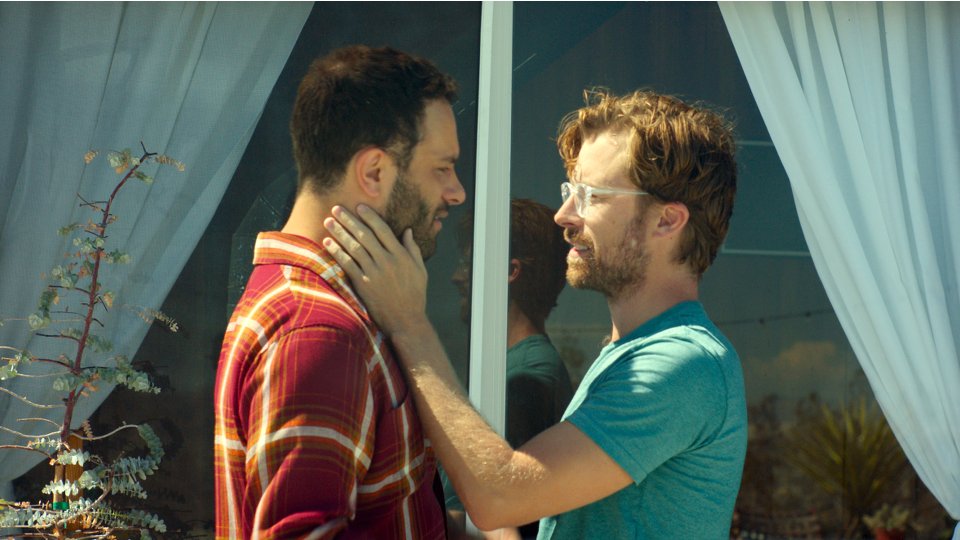 Dean (Lucas Near-Verbrugghe) is caught off guard when he receives an email from lost love Alex (Aaron Costa Ganis). The two email back and forth before agreeing to meet at Dean’s house near Joshua Tree in the desert. The moment they see one another, Dean and Alex are overcome with lust but the more they attempt to reconnect, both men uncover secrets and truths about each other that threatens their impulsive decision.

Lazy Eye is the latest movie from writer/director Tim Kirkman (Loggerheads) and for the most part it’s a two-hander between Dean and Alex. The film is an exploration of the lasting impact that love and lust can have on people and it’s also a cautionary tale about trying to recapture the past. Dean and Alex haven’t seen each other for 15 years, with Dean trying throughout that time to find out where his passionate fling went with no luck.

The build-up to their reunion is a tense one with Dean heading to the house in the desert and remembering back to their original night of passion. In that moment nostalgia overcomes him and he pleasures himself in anticipation of what’s to come when Alex arrives. Sure enough the two men rip each others clothes off within minutes of seeing one another but that’s when the film gets really interesting.

Following their lust-fuelled romp, the two men are forced to face up to why their original fling ended and both are hiding things from the other. They slowly tease nuggets of information from one another with a sense that they don’t really want to dig too deep due to their intense sexual connection. As Dean and Alex scrape the sheen off the surface of their relationship and look deeper, we’re taken back 15 years to the moment they met, which offers wider context to their relationship.

Lucas Near-Verbrugghe and Aaron Costa Ganis are absolutely stunning as Dean and Alex. Their chemistry sizzles and you can feel the heat as you watch them together. Both actors really get under the skin of their characters and they peel away the layers to reveal men who are carrying their own baggage and perhaps are struggling to be honest with themselves, let alone each other. Rarely in gay cinema do you see performances of this kind, which is one of the things that makes the movie such a treat.

Writer and director Tim Kirkman has crafted a relatable and compelling story. I doubt there are many people who haven’t thought ‘what if’ about a past relationship and the way he plays that situation out in Lazy Eye is magnificent. Alongside a tight script and wonderfully nuanced performances from his actors, Kirkman has crafted a film that looks stunningly beautiful. Each shot is framed perfectly and the house location is used very well.

Lazy Eye is a rare gem of a film that ticks every single box. It’s dramatic, it’s funny, it’s emotional and it’s sexy as hell. By the end there are still some questions to be answered and it left me wondering if there could be a follow-up in years to come. If there is, I’ll be first in line to see it but if not Lazy Eye is a satisfying and rewarding piece of film-making that deserves repeat viewings and a whole heap of critical acclaim.