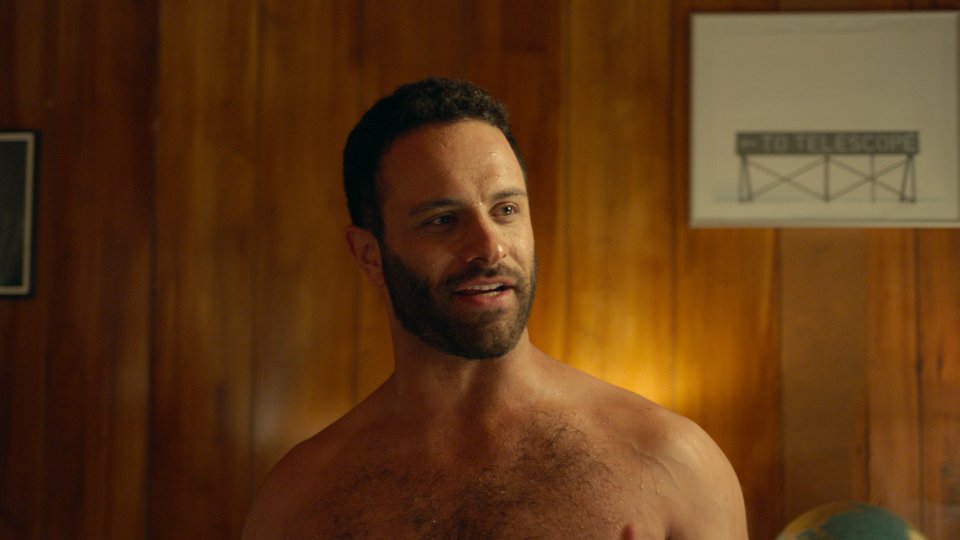 Aaron Costa Ganis is getting plenty of attention thanks to his role as Alex in Tim Kirkman’s latest movie Lazy Eye.

A graduate of NYU’s Graduate Acting Program, Aaron has starred on the big screen in films such as Straight Outta Tompkins and Price for Freedom, and on the small screen in Marvel’s Jessica Jones, American Odyssey and Unforgettable.

Lazy Eye arrives on DVD this week so we caught up with Aaron to talk about the movie, find out more about the character he plays, and to discuss his experiences on set.

Hi Aaron. How are you today and where does this Q&A find you?

Lazy Eye is arriving on DVD. What’s the movie all about?

Lazy Eye is, at it’s center, a love story. I guess then all of the peripheral questions it’s asking are really about love too. It asks the question, ‘is this the life you want, and are you ready to accept it?’

You play Alex in the movie, the long-lost love of Dean. What kind of a person is Alex and what do we need to know about him?

I don’t think you need to know anything about him. I think that’s actually the trick. Here’s a character who has survived as a nomad, a wanderer. His ability to exist is inextricably linked to his inaccessibility as a person. Whatever that means.

It’s safe to say that both Alex and Dean go on an emotional rollercoaster over the course of Lazy Eye. What were the biggest challenges for you as an actor when making the movie?

There were a lot of constraints in this process, which objectively could’ve been seen as challenges but I think they were each helpful resources in their own way. For example, our shoot schedule was insane. 12 days. Most other projects I’ve worked on have at least another week or two in there as something of a buffer. Because we were so limited with time, it forced Tim, Lucas, and I to come together quickly and work on an essential or a fundamental level- because we had to. If we got weighted down by anything superfluous, we would have to basically cut a scene- or limit coverage- because time was truly of the essence. So, a challenge, yes, but also a great way to figure out a vocabulary and work quickly.

The chemistry you created with Lucas Near-Verbrugghe is absolutely fantastic. Did you get to know each other before you shot the movie or would you say the chemistry just came naturally?

I knew of Lucas before the film. In fact, we went to the same MFA program for acting in NYC (NYU Grad Acting), Although Lucas graduated years and years before me- which, yes, makes him much much older. I had seen him perform and had ben stupidly impressed with him as a comedic performer. In fact, I had seen him perform in a small role in the NYU production of Importance of Being, 6 or 7 years ago, alongside some extraordinary talent, and Lucas completely stole the show. I’d wanted to work with him since then. In Oscar Wilde’s period costume or, in this case, in our birthday suits.

There’s a pretty sexy and passionate love scene in the first half of the movie. A lot of actors describe those kinds of scenes as pretty awkward. How did you find shooting it?

So f$&%ing awkward! No no. I jest. I think what’s lovely about working with someone who is a trained actor, and who knows that the greatest task is fulfilling the narrative, it was much less awkward that I expected. We were able to find use humor to navigate the anxiety of being naked and sexual with a lot of people watching. I think that’s usually where the anxiety rests – not in the partner (unless your partner is a sexual predator) but usually in the coordinating on set. In that respect, Tim was an expert. I felt completely safe, and respected, and taken care of- and so the chemistry, etc. took care of itself.

What attracted you to the role of Alex in the first place?

I’m excited by simple narratives that ask basic human questions. Morality films and stories that question behaviour and relationships can be so impactful to me. I think that was what I initially was turned onto. Alex is a man who is looking in all directions trying to find himself- forward and back – admittedly making mistakes, but still moving forward in pursuit of love. I didn’t have to be on a spaceship with laser guns trying to save the universe from space monsters. Actually that would be cool. On second thought- James Cameron, call me! (Love you, Tim).

Tell us about your experience making Lazy Eye. What was it like to work with Tim Kirkman?

Tim’s fine. Totally passable. No, no. Tim is excellent. I’ve said this an the screenings we’ve been having and I really believe it: it’s very difficult to find a director who is comfortable enough in his process that he can trust the actors to just do the damn thing. A lot of directors out there operate from fear and that means everyone in a 10-mile radius usually resorts to fear too. Not fun. Tim is someone who has been in/around/on bulls at/ enough rodeos to know that the healthiest and most productive way to work is collaboratively- I give him a ton of credit for that. It’s the hardest thing to do and is absolutely essential.

I’m working on a show right now in NYC that was just a NY Times Critics Pick and that runs through December. I have an international heist film called Blood, Sand, and Gold that premieres in March that we’re beginning a PR push for at the moment.

What are your plans for the holidays this year?

Seeing as how this will be the last holiday season America will be seen as a civilized democratic republic, I will be drinking. Probably from this Thanksgiving through the year 2024.

Lazy Eye is available on DVD from 15th November 2016 through Breaking Glass Pictures. Watch the trailer for the movie below: