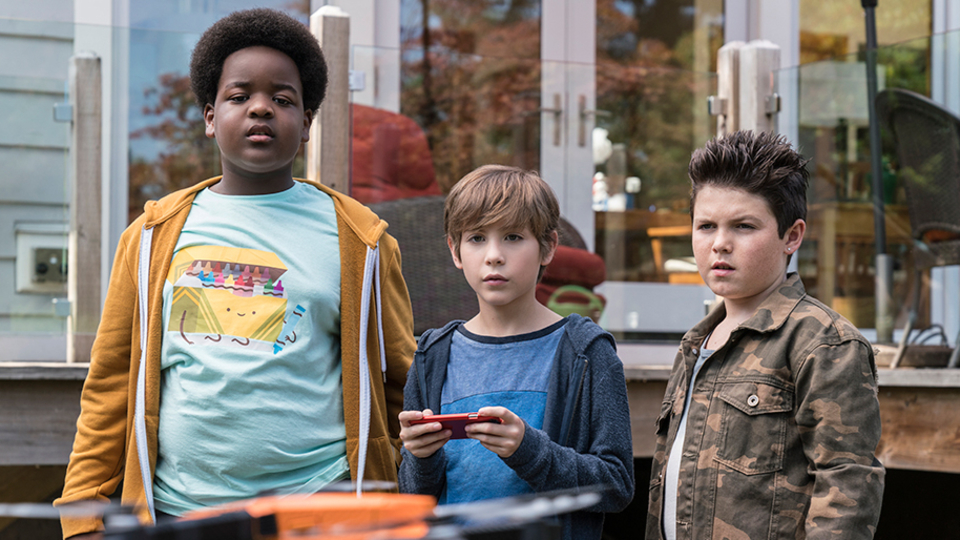 For those of you who’ve seen the ad campaign for Good Boys, you’ll know just how funny the premise is. The teaser trailer begins with one of the films producers Seth Rogen telling the cast that they can’t actually watch their new movie because they are too young. It’s a real marker for the kind of comedy you’ll expect to see in the movie, but there’s also a lot of heart thrown in for good measure too, giving the film a nice balance. At 89mins long, the gags just about hold it together for long enough for Good Boys to deliver a forgetful but very funny piece of escapist fun.

Three sixth grade boys named Max (Jacob Tremblay), Lucas (Keith L. Williams) and Thor (Brady Noon) are getting ready to attend a cool party run by the it-crowd at their school. But before they can do that, they need to get Max’s dad’s expensive drone back, which has been commandeered by two teenage girls after the boys were spying on them for tips on kissing. And so begins a crazy journey to not get grounded, attend the party of the year and potentially kiss some girls for the first time as they come up against lots of obstacles which will test their friendship.

The comedy comes thick and fast in Gene Stupnitsky and Lee Eisenberg’s affectionate ode to growing up. At first glance this could be dismissed as a crude comedy but there’s an emotional core to all of the hijinks and mayhem that makes the final product much more enjoyable than it has any right to be. The main gag does stretch a fair bit but that’s where the strength of the main 3 young actors really comes into play.

We all know how good an actor Jacob Tremblay is after seriously impressing in the Oscar-winning Room alongside Brie Larson. Tremblay leads the film very well and shares a great and believable chemistry with Keith L. Williams and Brady Noon. The comedy stems from sixth graders having assumptions on things but not really knowing anything, and again that could have fallen flat after awhile but the script sees to it that this comedy always delivers choice lines and memorable moments, from their misunderstanding of what a tampon is to discovering their parent’s adult toys and being confused.

The supporting cast are all great, with plenty of familiar faces from the world of American indie comedy playing their part to help the boys along. Will Forte, Lil Rel Howery, Retta, Michaela Watkins and Sam Richardson all hand in noteworthy cameos with Molly Gordon and Midori Francis quite funny as the teenagers who have a beef with the boys.

Good Boys is a funny comedy that won’t stay with you for very long after the end credits roll, but will guarantee a great night out at the cinema. The cast make it a laugh, and with producers like Evan Goldberg, Johan Hill and Seth Rogen onboard, you can be guaranteed on some cracking gags along the way. Good Boys is blessed with a least 3 truly hilarious set-pieces that deliver some of the funniest scenes I’ve seen this year. With a nice central theme about friendship and growing up, Good Boys does enough to warrant a watch.