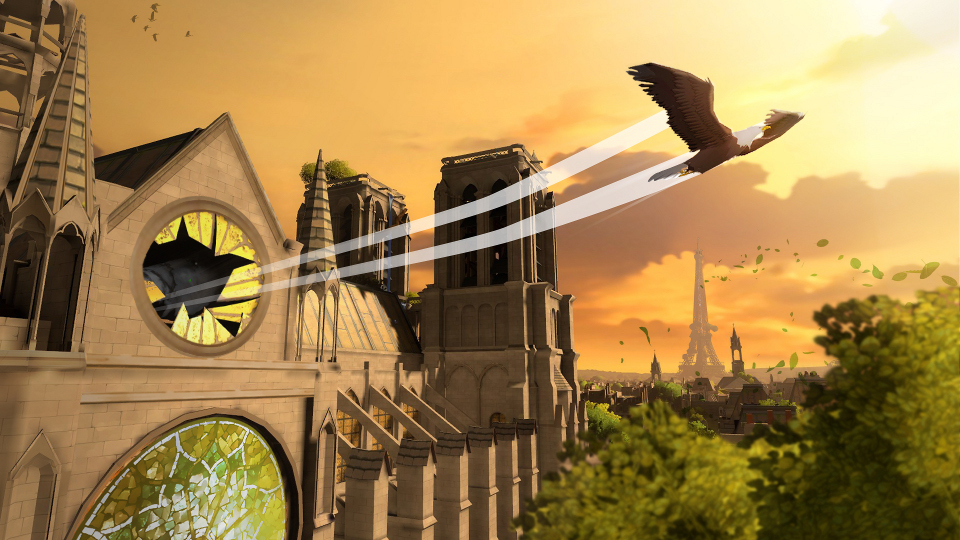 Ubisoft has announced that its first virtual reality game, Eagle Flight, is now available on Oculus Rift. Eagle Flight will also be available on PlayStation VR from November 8th and HTC Vive from December 20th.

Developed by FunHouse, a division of Ubisoft Montreal, Eagle Flight is set 50 years after humans have disappeared from Earth, where wildlife and nature have taken over Paris. The game lets players explore one of the most visited cities on the planet from an entirely new point-of-view, as a bird of prey. As an eagle, players glide past historic landmarks and weave through the narrow streets and secret passages. In single-player mode players refine their flying skills and learn new tricks by competing in challenges, and in multiplayer they can face-off in heart-pounding capture-the-prey dogfights for up to three vs three players.

Eagle Flight, developed specifically for VR, emphasises accessibility and comfort. The game features a breakthrough in VR control technology that provides players with natural and precise movement controls. With this breakthrough players can comfortably hone their flying skills in order to achieve remarkable aerial maneuvers, and experience the true sensation of flight.

[blockquote]At Ubisoft we care deeply about innovation and new technology, so we’re excited to release Eagle Flight, our first Virtual Reality game. Eagle Flight is a fantastic game for newcomers to VR and experienced players alike. The game is very intuitive, so novice players can simply boot up the game and fly at their own pace with ease. For more seasoned players looking for a more intense experience, they can jump into the single player challenges or into a multiplayer match where they will have to expertly navigate the streets, skies and underground of Paris as they try to capture their prey and defeat their opponents.[/blockquote]

Ubisoft are also working on other VR titles including Werewolves Within, Star Trek: Bridge Crew and a VR partnership with the film company, SpectreVision.

Check out the official Eagle Flight website for more information.

View some Eagle Flight screenshots in our gallery below: