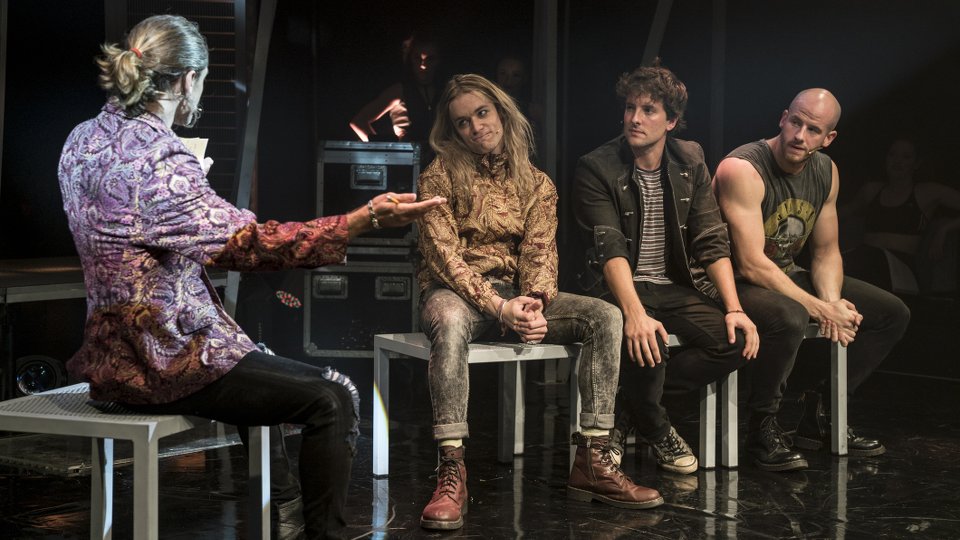 In music history, there has been a lot written about the 27 club. This isn’t some swanky London establishment, but rather the painfully young age at which a number of music-legends have untimely passed away. Jim Morrison, Amy Winehouse, Kurt Cobain, Janis Joplin, Jimi Hendrix, to name but a few. They are all members of this club. When you hear the words member and club, it makes you sound like something you want to be a part of. Except sadly, not on this occasion. 27 focuses on a young band, and their lead-singer Orpheus. Orpheus battles drink and drug problems and generally feeling the ill-pressures of fame. Battling demons in his head and struggling with life in general – despite fronting a successful rock band, the show shows the massive down sides associated with fame. The show also shows the struggle that people with mental health issues may face.

The choreography has been co-directed by the fantastic Arlene Phillips and this is shown throughout the show. There is some impressive and dark dance movement – capturing the essence of the struggle of what Orpheus is going through. The show should be shown to young teenagers, to highlight the possible downside to mega-stardom. Many young people aspire to have that fame, but they don’t always know how to handle it. In the news lately, there has been a lot of talk of mental health issues with several high-budget campaigns, aimed specifically at men. It’s OK to talk. Sadly, with drug binges and the therapy and finding the difficulty to battle personal demons, a successful outcome is not always possible and the show shows the struggle.

Jodie Jacobs performance stood out, she graced the stage with fierce expression and fire. She displayed excellent and powerful singing and this really captured my attention. Ryan Gibb also impressed, giving a very real and believable performance. There are some fun moments in the show, which comes across as a more Spinal Tap version of being in a rock band. Orpheus is at times a little rather too cheesy to be able to be taken too seriously as a rock star (I can’t imagine Kurt Cobain acting like his character at times, for example). This is a musical after all, so we can overlook this. His solo mid-performance was particularly great and it showed the potential that the show has.

The only thing that the show has in common with the 27 club is the age at which we see Orpheus in the show. There are no other actual references to the 27 club whatsoever and the show doesn’t feature any of their songs – but rather a full and original score. The lyrics at times I feel have been over-done many times before. We feel that 27 still requires work to become great. I think it would have been better had the first half focused a bit more on the band itself and then perhaps showing their fall from grace. (If that’s what the show was trying to show). The plot is rather weak in parts, but other parts lift the show back up. The second half is a lot stronger. It’s a bit of a bumpy ride. There are some really funny parts in the show, and other parts are a bit cliché.