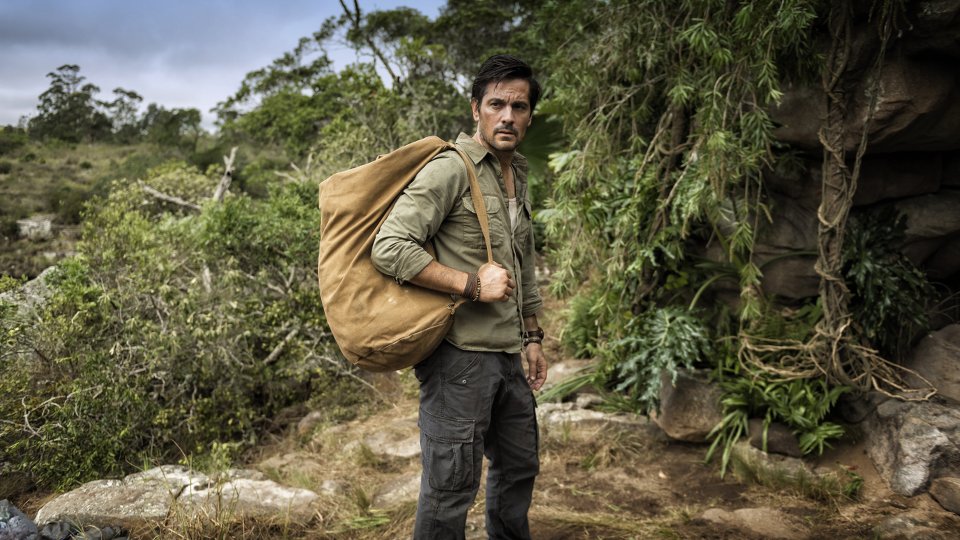 New York-born Michael Landes first rose to fame as Jimmy Olsen in The New Adventure of Superman alongside Dean Cain and Teri Hatcher in the early 90s.

Since that role, Michael has gone on to play a wide variety of characters on both the small and the big screen with notable credits including Final Destination 2, Lakeview Terrace and Burlesque. For his latest role Michael is playing one of the title characters in Sky 1’s new action-drama Hooten & The Lady.

I caught up with Michael while he was in London to find out more about the show, talk about his natural chemistry with co-star Ophelia Lovibond and discuss the epic nature of the ambitious show.

How would you describe Hooten & The Lady?

I would describe it as globetrotting, treasure-hunting, action-adventure with a little bit of humour. That’s what I’ve boiled it down to in a sentence and I think that’s what it is.

What attracted you to become part of the show in the first place?

I love the writing that Tony (Jordan) did between Hooten and The Lady. All of that exchange is very fun to play and fun to read, so hopefully it will be fun to watch. Ultimately it was the writing that I loved and I was a fan of Tony Jordan – I’d seen Hustle and before that Life on Mars. The character of Hooten is really fun. He sort of reminded me of all those kind of action hero guys that I grew up loving and watching, imitating and quoting. I read that and thought it was exciting, then to throw in the whole ambition and scale of trying to go around the world and do a show…I don’t know anyone that does that on television in America certainly. That seemed like a really big challenge and adventure.

From the very first episode you get the sense of the epic scale of the show. Is it going to get bigger and bigger throughout the series?

I think it does. Every episode is meant to be like a little movie. Episode 2 we’re all over Rome, and we shot all over Rome in all the places you’d want to go to if you visited Rome. Over the course of the series we shot in Russia’s Red Square, we were in Cambodia in Angkor Wat, we were all over South Africa, we were in Namibia… Did you see the Mad Max movie?

When you see that dirt and that scale, that’s kind of where we filmed a little bit of episode 3. When you watch that on a TV, a big screen or an iPad, it looks big. I like that personally, I’m a fan of that.

One of the things that really stands out to me about the show, is the way that Hooten and The Lady interact with one another. It’s safe to say they don’t love each other to begin with isn’t it?

No. I think that the fact they both want the same thing but go about it differently provides a little bit of friction or spark. Once you know somebody and you know what button to push, I think that becomes fun. Certainly Hooten enjoys her being in sticky situations with him. She gets her own too, it’s not like she’s just a damsel in distress. She saves Hooten occasionally and she dishes it as much as she takes it so it’s fun. We filmed in order so what you see in episode 1 is us first getting to know each other.

You and Ophelia have a natural chemistry from the moment you meet on screen. Did you get any opportunity to spend time together before shooting?

We had a meeting in London before we got the job and I think we hit it off there. If you’re going to work with somebody 14 hours a day for 7 months, you’ve got to get on pretty well. We just found these characters and the characters set it (the chemistry) up really well. I think once we started to find these little idiosyncrasies about each of the characters, I think it helped with that. We got to hang out a little while traveling and we would talk a little bit but I think a lot of it came in the doing of it.

I’m really excited to see Jane Seymour arrive later in the series. What was it like working with her?

She’s lovely. She’s the most accessible, friendly, positive…with more energy than the rest of us put together. She was a lot of fun and so generous and so kind. I only spent a little bit of time with her because she was in the Rome episode and we all went for dinner. She’s been doing this a long time and she was very professional. I think Ophelia would probably be able to answer this more but it’s fun to have somebody like Jane play Lady Alex’s mother.

Alongside Jane there are a lot of recognisable faces in the show aren’t there?

Jessica Hynes is an amazing comedian, Joanna Scanlan and Shaun Parkes. What I love is that you’d normally have a show like this and you’d stunt cast it but I think the people they got to do this show, when I tested it with my snobby English actor friends, they thought it was very cool to get people like Anton Lesser and Jessica Hynes. I like that they didn’t just take the obvious and they went for good people. If you like the show W1A, we’ve got half the cast so I think that gives it a little cool street cred.

The show mixes lots of different elements such as action, adventure and comedy. What’s it like as an actor to be able to play with that kind of variety?

It’s like going to a restaurant that has all the things on the menu. It ticks all of those boxes. In life I try not to take everything so seriously and I’m naturally drawn to that cheeky banter. I love action movies so getting top pretend to be an action hero was also awesome. Those two things were exciting to me more so than the historical elements. We did an episode where we’re trying to find Alexander the Great’s tomb and my daughter was learning about that at school. She was like ‘no Dad, they never found it!’ and I told her to just watch the rest of the episode.

The role of Hooten is quite different to the other roles you’ve done over the course of your career. Is this role challenging in a different way for you?

I think this is my favourite role I’ve ever played, and I know somebody would say that in an interview, but it genuinely is. I did a show in 2000 called Special Unit 2 – I don’t know if it ever came here. It was like a Men in Black cop show from the guys that did 24, I just did that show before 24 unfortunately. That character was not that far from who this guy is, it’s Michael Landes 15 years later. I feel like I’m more in that space and this represents the best of what I do. I’m a jobbing actor so a lot of what I do through the years isn’t necessarily the best of me or the thing I want to do most. I hope this represents the combination of those best parts.

Why should people make time in their schedule to tune in to Hooten & The Lady?

It’s a nice escape to whatever is going on in the world and in your day, to get to go around the world and go on an adventure. I think what will get people to watch more than one episode is the interaction between these two characters because I think that’s what drives people back to show if they like the relationship and the characters. The big scale of it…I feel like it’s a big glass of red wine or a piece of chocolate on your pillow. It’s a treat. It’s not trying to be Fargo or House of Cards, it does what it says on the tin.

I agree with you. I have kids that don’t get to watch Final Destination 2 but aren’t we all looking for something other than America’s Funniest Home Videos to watch with our kids?

Do you have any other projects lined up for the rest of the year?

I did a film before this that’s coming out in the US before Christmas called Gold with Matthew McConaughey and Edgar Ramirez. It’s more of a supporting role but I’m very excited. It’s directed by Stephen Gaghan who is a two-time Academy Award winner. He did Traffic and Syriana. It’s a drama about greed and gold.

Hooten & The Lady starts at 9pm Friday on Sky 1 HD. Watch the trailer for the show below:

Advertisement. Scroll to continue reading.
In this article:Hooten & The Lady, Michael Landes, Sky 1