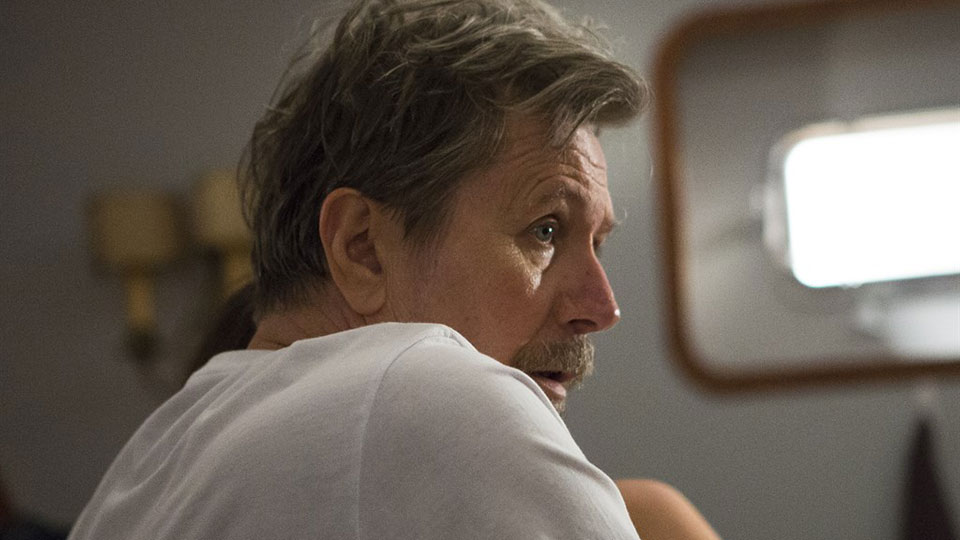 With their marriage under strain, David (Gary Oldman) and Sarah (Emily Mortimer) take on an old boat as a project with the plan to sail it with their family. The impulsive purchase by David causes friction at first but Sarah comes on board and decides to support her husband as they work through marriage difficulties following her infidelity. With their daughters Lindsay (Stefanie Scott) and Mary (Chloe Perrin) with them along with boat hands Mike (Manuel Garcia-Ruffo) and Tommy (Owen Teague), who is Lindsay’s boyfriend, the family sets off on a doomed journey unaware of the boat’s haunted history.

Directed by Michael Goi from a script by Anthony Jaswinski, Mary is a horror film that channels the traditional horrors of old. Set primarily on and inside a boat, the film uses its small space incredibly well, creating a feeling of claustrophobia and tension that keeps the audience on the edge of their seat. The story is told in two narratives – one with Sarah talking to police detective Lydia (Jennifer Esposito) in the aftermath of the shocking events that take place, the other unfolding the events from buying the boat to Sarah being held in custody on suspicion of murder.

There are plenty of decent scares to be found during the course of Mary. Mostly they are jump scares but the tension definitely keeps you on edge. Visual shocks are plenty and you have to really scan the screen to make sure you catch every single creepy moment. What the film doesn’t quite manage to do though is stay away from the typical horror tropes. Creepy youngest child drawing sinister pictures. Check. Adult female seeing and hearing things but no one else seems to. Check. Possession of lesser characters leading to violence and craziness. Check.

That having being said, it doesn’t make it any less effective. Yes I felt like I’ve seen much of what transpires here before but that didn’t hamper my enjoyment thanks to Goi’s direction. Given his past work on American Horror Story, it’s not surprise that he knows how to pull together a seriously creepy feature. He also knows how to get the best from his actors and Jaswinski’s script fleshes the characters out much more than most horror films bother to do. There was a surprisingly emotional edge surrounding David and Sarah’s relationship, which I wasn’t expecting.

Performance wise Gary Oldman and Emily Mortimer are always watchable. They are believable as a married couple battling through a difficult patch. Their gravitas elevates the film for sure but the rest of the cast provide able support too. They all do their jobs and they help make the film enjoyable.

Mary may not be reinventing the wheel but it’s an effective horror that keeps you hooked and makes you jump. There’s nothing here that hasn’t been done before but you can turn your brain off and just go along for the rise. I enjoyed it far more than I was expecting to and while it’s not one of the strongest films showing this year, it’s by far one of the jumpiest and that surely has to count for something?