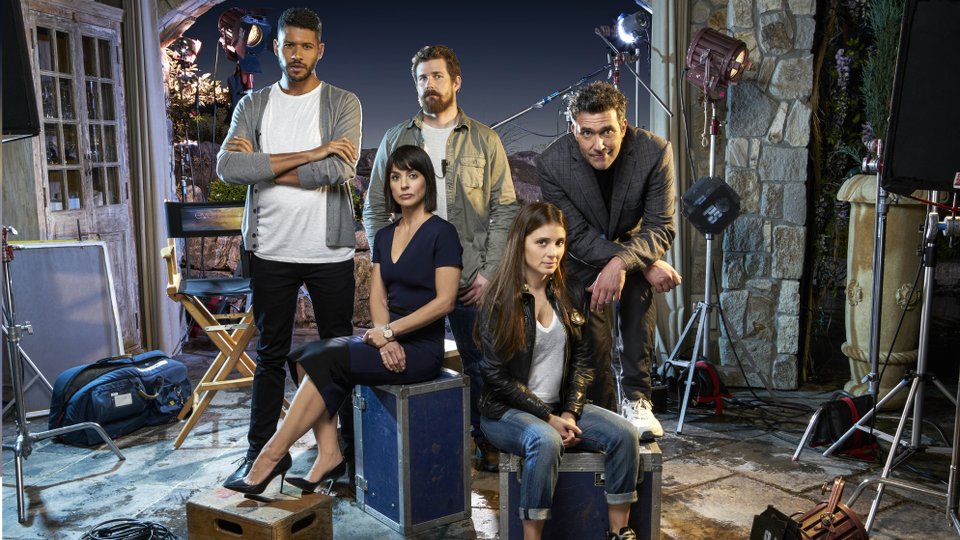 UnREAL closed out its second season with one mother of a twist that left four central characters as accomplices (both voluntarily and involuntarily) to a rather shocking crime.

If you haven’t seen the second season of UnREAL and want to avoid spoilers then we suggest you stop reading now. If you have seen it and want to hear our thoughts keep reading.

In a bid to redeem himself for attacking Rachel (Shiri Appleby) and allowing Yael (Monica Barbaro) to manipulate him, Jeremy (Josh Kelly) ensured that Yael and Coleman (Michael Rady) couldn’t go public with their expose on Everlasting by orchestrating a car crash. Whether he rammed them off the road or cut their brakes remains to be seen but it doesn’t seem likely that either of them will make it out of the accident with their lives intact.

In the Everlasting live finale, Darius (B.J. Britt) left Tiffany (Kim Matula) and Chantal (Meagan Tandy) at the altar when Ruby (Denee Benton) made a surprise return to the show. Darius proposed to her on live TV but Ruby asked him to spend time getting to know her before they made that step. The union was a first for Everlasting, breaking new ground with a black suitor choosing a black woman as his companion.

Elsewhere Rachel and Quinn (Constance Zimmer) joined forces to try and stop Coleman from going public but their failure is what led to Jeremy stepping in. Chet (Craig Bierko) was privy to Jeremy’s actions and the season ended with the two of them lying on loungers with Quinn and Rachel. What does Jeremy’s actions mean for the foursome and the future of Everlasting?

UnREAL has already been renewed for a third season so we know for sure it will be back in 2017. While there’s still a wait for it to return, I’ve put together what I want to see on the next season.

2. Redemption for Jeremy. I’m not wholly convinced I believed the road that Jeremy went down in season 2 and I doubt there’s a romantic future for him and Rachel after what he did. Having said that, Jeremy did what he did to Coleman and Yael out of love for Rachel and loyalty to Everlasting so he’s clearly trying to make it up to everyone. It remains to be seen if he can evade being arrested but I hope he finds a way to get back on the Everlasting team and pulls himself together.

3. No more John (Ioan Gruffudd). Whoever thought it was a great idea to try and pair Quinn with someone so hopelessly unsuited to her is beyond me. While it was interesting to see a softer side of Quinn, it doesn’t make as good viewing when she’s not her ball-busting self.

4. Quinn and Chet growing closer. Their relationship is hugely toxic and Chet is a bit of a bastard but there’s no denying the spark between the two characters. They may not have a future as a couple but they are so entwined with one another they will always be pulled back together. Now they are working on the same team again, rather than against each other, they are in the perfect place to have a reunion of sorts.

5. A little more stability for Rachel. The show has played heavily on her mental instability, and while that will always be a part of her, I’d welcome it taking a bit more of a backseat in season three. Rachel will always be teetering on the edge but I’m sure there are more inventive ways to incorporate that into her actions without resorting to the tired cliché of a breakdown. Quinn encourages Rachel’s behaviour but she also reels her in before she goes postal (well most of the time) so I’d like to see more exploration of that dynamic and Rachel starting to get more of a hold on her own mental state without having to rely on others e.g. Coleman, her mother to constantly point it out for her.

6. More character development for Madison (Genevieve Buechner). The evolution of ‘pigtails’ from meek little girl who blew Chet to full-on Quinn wannabe was quite the joy to witness during season 2. Madison is hungry to be like Rachel and Quinn, despite the latter despising her, and she saw that manipulation was the key to success. We think Madison may be on the verge of becoming a real force to be reckoned with.

7. Jay (Jeffrey Bowyer-Chapman) to stop flip-flopping with his morals. He seems to like to be the show’s moral compass but he doesn’t often follow his own words. Jay has no problem manipulating people when it suits him but is quick to call others on it if it’s going to hamper his chances of success. A bit of consistency and less moral outrage would be very welcome.

8. A switch-up of the Everlasting formula. For two seasons Everlasting has followed a fairly similar format so I’d like to see that format get a refresh during season 3. Following the scandalous season they had with Darius as the suitor, it would be interesting to switch it so that a woman was the one hunting for love and it was a bunch of men battling for her affections.

9. Familiar faces returning. I highly doubt that Rachel’s feelings for Adam (Freddie Stroma) are fully resolved and it was a joy to see him back on the show (if only for an episode) in season 2. There’s more to explore there and I’d like to see Adam back, and even some of the female contestants from the first two seasons.

10. Plenty of shocking twists and dialogue. The thing that makes UnREAL such good TV is that it never fails to leave you with your jaw on the floor. Some have criticised the show for going too far but I think it could go further. When it gets dark, it’s at its absolute best and more Quinn one-liners is certainly no bad thing is it?

UnREAL’s third season will arrive on Lifetime in the US and is expected to debut on Amazon Prime Video in the UK in 2017.