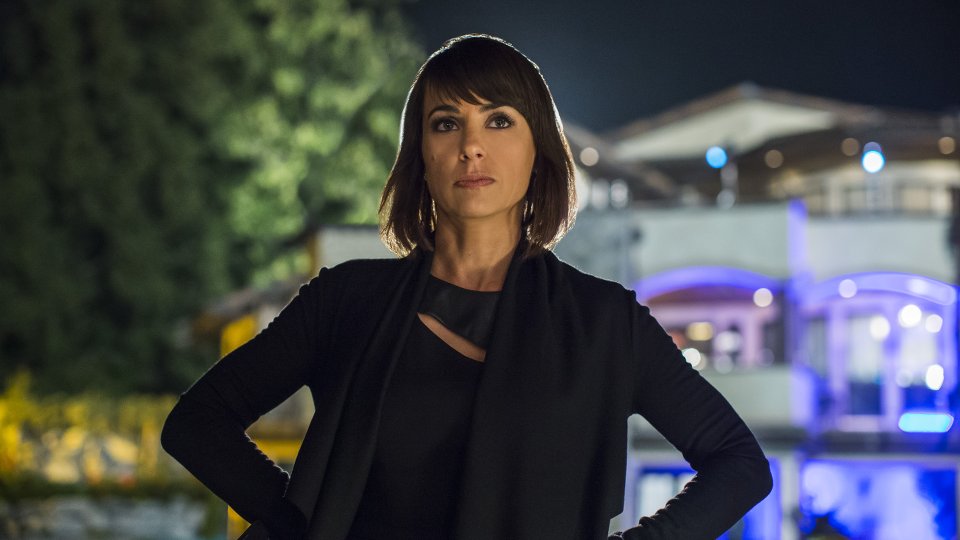 Lifetime may be known for their guilty pleasure TV movies but their latest foray into television is a surprisingly different proposition.

UnREAL, which premieres in the UK on Tuesday, gives an unflinching look at what goes on behind-the-scenes of fictional reality show Everlasting. From the crew through to the contestants, the show explores what its really like to make popular shows such as The Bachelor.

Ahead of its UK premiere, we caught up with Constance Zimmer (House of Cards, Grey’s Anatomy) to find out more about the controversial new series, talk about her character Quinn, and to discuss the gasp-inducing script.

What do we need to know about UnREAL?

Oh my goodness! What you to know is to expect the unexpected. The show is unlike anything that Lifetime has ever done and unlike anything I’ve ever seen on television. You’re entering two worlds; you’re entering into a reality television world and you’re also getting to see behind-the-scenes of the making of those shows, the characters and how it’s affecting both the people who are in front of the camera and the people who are making the show.

It does and I think that’s what’s been shocking people so much. I think people thought we were going to be playing nice but we’re not really playing nice. We have a story to tell and we have a very short amount of time to tell it in. Besides it obviously being behind-the-scenes of a reality show, it’s also the story of character, of love, the princess fantasy and what all of us are willing to do to try and find true love; the lengths we’ll go through whether you are the one being put in front of the camera or the one pulling the strings.

You play the character of Quinn, who is the ball-busting producer of the reality show in the series Everlasting. Tell us more about the character and what she’s like.

Quinn…I think the best way to describe her in one word if you could is conflicted. She’s very conflicted about her life and where she’s ended up in a sense that she’s in a very powerful position, she has a job to do and she has to do it no matter what the costs are, whether it’s sacrificing her own life or sacrificing other people’s lives. She wants to prove that she can make good television and sometimes she crosses some lines that are very inappropriate but if it makes for good television she’s done a good job. You will get to see later in the season more of Quinn’s vulnerability, where all of her struggles come from and where her pain is.

All of (the characters) are pretty bad and there’s not a ‘good’ person in the bunch, which I find fascinating in television when you can represent so many different colours of struggle and different ways that people have adapted to it.

When you read the script for the pilot did you gasp at some of the things that Quinn comes out with?

Yes, I definitely kept thinking ‘I’m sure they’re not going to keep that in’ or ‘I’m sure we’ll shoot that but they won’t leave it in the show’. I was pleasantly surprised at how much we stayed true to what was on the page because the page was always so shocking to us. We only ever read two episodes at a time so we were just as surprised as you guys the viewers watching it as we were reading it for the first time. We didn’t know what was going to happen. When I signed on to the show, I hadn’t even read the actual script that we were going to be shooting. That was even more terrifying to me because I had already signed on and then I read who she was.

I remember I just kept shaking my head after every time these crazy lines would come out of my mouth. I thought ‘how am I going to do this? How am I going to make this woman get away with the things that she says and yet keep people invested in her as a character?’ That was definitely something for me, and Shiri Appleby who plays Rachel, that was a huge concern to us. We wanted to make sure that we were somehow going to be relatable. That’s why I think when it comes down to it, that the core of the show is about people trying to find love and it just happens to be set in a world of television.

Both Quinn and Rachel do come off as likeable but you get a sense that both characters suffer from a sort of Stockholm Syndrome in that they just have to do what they have to do to get through a day. Would you say that was true?

Yes for sure. Just getting through that working day without hurting anyone too much I guess or without hurting yourself. Rachel definitely struggles more with the guilt of it, which I think eats her up from the inside whereas Quinn has just created this hard shell that allows a lot of it to just bounce off and she realises its just another season, these people will be gone and we’ll just move on to the next.

The relationship between Quinn and Rachel is complicated and it’s clear from the first episode that there’s a lot of history between the two characters. How much more complicated can we expect that to get as the show progresses?

Even more! I think what happens is you realise it’s not only complicated, it’s incredibly co-dependent. They need each other more than I think they would like to admit. I do think that Quinn thinks she knows what is best for Rachel but that Rachel still doesn’t know. There is a mother-daughter relationship that I believe forms with them where Quinn is trying to guide her but who is she guiding? Is she guiding the person that Rachel is pretending to be or is she guiding the person that Rachel really is? That’s the struggle for the whole season; both of them trying to figure out who they are to each other and how they continue that relationship without complete severing it.

UnREAL has a very large cast. What was it like to work in an environment with so many people around?

It was definitely one of the scarier things, as it was such a huge cast and a lot of women. Normally in those situations women tend to tear each other down, which is a lot of what we represent on the show, but that never happened behind-the-scenes. All of the women were so supportive and everyone was so committed to representing their characters so well and so real. It became one of the funnest sets I’ve ever been on. It was so pleasantly unexpected. I loved it and it was just crazy because you just thought well if you didn’t really like that person they’d just get voted off (laughs). It was incredible because you did have to make fast friends then when people got voted off you thought ‘oh no, that’s it! They’re done’ and you almost wanted them to stay for the whole 10 episodes. We all definitely bonded especially because we were in Vancouver and we were all away from our friends and our families and friends. We all became our own unit and it was incredible.

UnREAL premieres in the UK on Tuesday 7th July at 10pm on Lifetime. Watch the trailer for the show below:

In this article:Constance Zimmer, Unreal