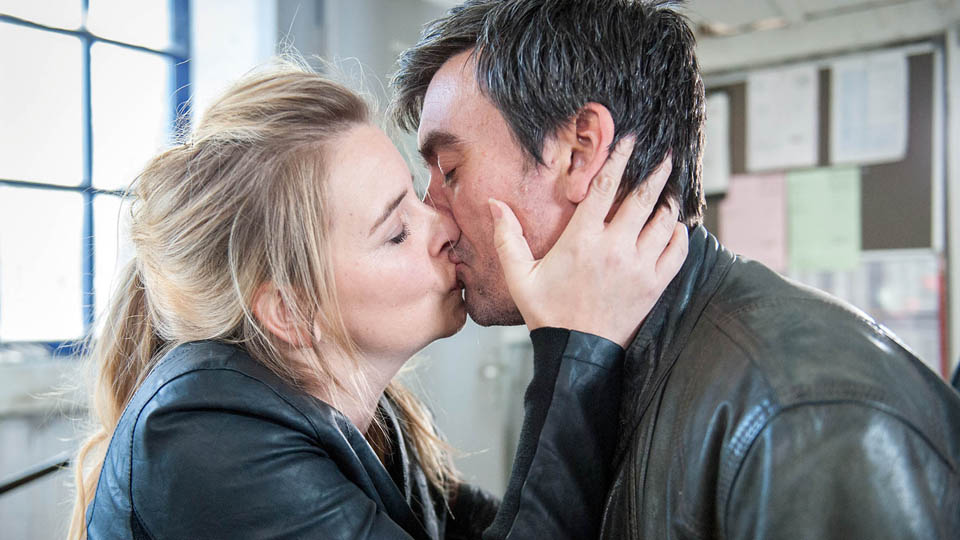 Welcome to our look ahead to what’s happening in Emmerdale this week and it looks like Charity has got Cain just where she wants him, Chrissie is tormenting Rakesh and a body is found….could it be Belle?

Cain lays into Charity when she admits she knew Belle wasn’t pregnant and he tells the rest of the clan who disown her.  With Cain trying to make Charity leave the village, she has a lead about Belle’s whereabouts and is concerned to learn it’s in the red light district.  Sam and Marlon follow her but are soon out of their depth and Charity sends them packing.

When Charity reaches the address she was given, she’s stunned to see Dean (Holly’s ex) who threatens her with a baseball bat.  With no way out she runs to the bathroom and calls Cain but after last week’s girl who cried wolf, Cain doesn’t believe she’s in danger.  However, when Sam comes clean about following Charity, Cain knows she wasn’t faking.  He arrives at Dean’s to find a battered Charity and wants to take her to the hospital but she insists a whisky will sort her out.  As he comforts her she leans in for a kiss and it seems that Cain can’t resist.

Chas warns Cain his libido may have ended his chances of saving his marriage for good whilst Charity delights in threatening to tell everyone about their one night stand unless he does something for her.  Cain manages to get Zak and Lisa to let Charity help look for Belle.

Later, Cain is given the cold shoulder by Moira who is worrying about her HIV test results and shuns him in favour of James.  Cain is fuming and goes looking for Charity who is having the time of her life taunting Moira.

Tracy overhears Vanessa accusing her of being a gold-digger and she misses a proposal from David on the radio.  He’s enraged when he finds out that Leyla and Vanessa are still being mean to Tracy.  He sets about another proposal plan; plane-writing.  Unfortunately, Tracy misses that one too and as she’s on the phone to the hospital, Vanessa overhears and thinks she’s cheating on David.  Vanessa tells Leyla who in turn tells David and when he fills her in on Tracy’s Dad and the situation the pair click that Vanessa and Tracy have the same father!

It looks like the pair are about to find out for themselves when they both arrive at Frank’s bedside at the same time and he has some explaining to do.  Can the newly found sisters bury the hachet?

Chrissie is reluctant to honour her deal with Rakesh, believing she can’t trust him and he worries that she’s realised he was involved in Andy’s escape.  When she tears up the contract for Mill he threatens to tell everyone Lachlan shot Lawrence.  Chrissie insists no one would believe him.  She tells Priya that she hasn’t bought Mill and Priya accuses her of wanting to sleep with Rakesh and because he refused she’s pulled out of the deal.  Infuriated, Chrissie plots her revenge.

Rakesh’s week gets worse when Rishi and Priya realise £20,000 has disappeared from the factory accounts.  Rakesh says he’ll call the bank to sort it, but instead agrees to sleep with Chrissie if she’ll pay him the money he needs that day.  Chrissie makes him work hard for the money, pretending that he’s attracted to her.  As he kisses her neck she takes a photo on her phone;  she’s set him up!

Joanie is worried about Zak’s stress levels with Belle still missing and kisses him to distract him and as one thing leads to another, he doesn’t hear his phone;  he misses a call from Belle!  When he realises and calls back, Belle’s phone rings from the gutter with no sign of Belle.  The police locate the phone and then there’s bad news when they find a body.  Could it be Belle?

Dan and Nicola get close when she helps him prep for an interview at a care home.  Kerry doesn’t seem as supportive as they all head to the pub.  As the night draws to a close is that the green eyed monster we see as Dan sees Jimmy sweeping Nicola off her feet?

April tells Bob that she thinks Marlon and Carly like each other, only for Bob to warn Marlon off.  Brenda warns him he shouldn’t get involved and he reluctantly apologises but has still clearly got his reservations.  Meanwhile, Carly and Pierce decide to train for a triathlon together and Rhona is jealous.

Holly is over the moon when Megan offers her an interview for the role of photographer for her wedding business.  Unfortunately, it clashes with Moira getting her HIV test results and Holly chooses to be with her mum.  Will Moira be negative?  Has Holly blown her chances with Megan?

Lawrence tries to keep Ronnie in the village;  is he still in love with him?