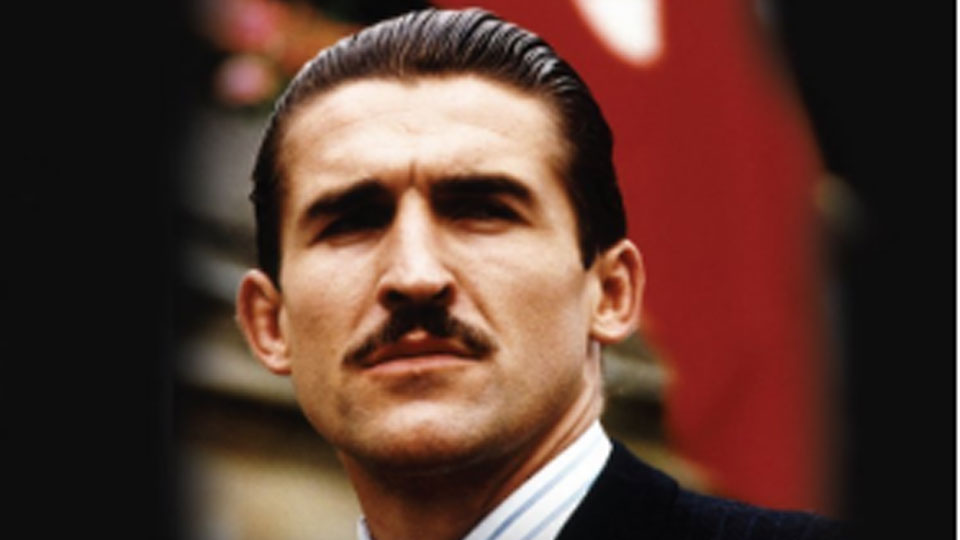 Sir Oswald Mosley is a fascinating character in Twentieth Century British history. Everyone knows he was a fascist and chummy with Hitler, but that’s where most general knowledge begins and ends.

Mosley is a four-part drama, made in 1997, which boasts a large budget and an excellent, all-star cast. Instead of going straight for the jugular, the series depicts the course of Mosley’s personal and political lives from the end of WWI up until the outbreak of WWII.

Writers Laurence Marks and Maurice Gran do an excellent job. It’s been meticulously researched, but they bring to life not only the character of Mosley, but a sense of the political landscape in British government at the time. Mosley is, at first, an impatient young man desperate for change and social justice following WWI, but he’s up against a crusty old establishment that refuses to give way to new ideas from the next generation (Windsor Davies is superb as David Lloyd George). Wisely, we see nothing of Mosley’s childhood. The focus of the narrative is very particular.

We’re introduced to Mosley as he enters politics, meets Cynthia Curzon and pursues her hand in marriage, even though she can see he’s a lady’s man and there is trouble ahead (unbeknownst to Cynthia, he is using her mother-in-law as a bit on the side).

Mosley is a surprisingly political drama. It isn’t particularly about fascism, or even much about Mosley’s infamous blackshirts, which only make their first appearance in the final episode. Instead, this is a drama about how people’s political opinions change and evolve over time and with setbacks. Thus, over the course of the serial, Mosley crosses the floor from the Conservatives to Labour, and then when he finds his proposals for economic reform ignored, he becomes an independent. Against this backdrop of political machinations, he pursues his second great love: women.

Mosley succeeds largely because it’s well-written, but also because of the star names attached to the production, and the stellar performances they deliver. It was essential to get the casting the title role right for the serial to work, and in Jonathan Cake they found a star and gave him his opportunity to shine. Boy, does he take it. Cake is magnificent. His Mosley is charming, charismatic, self-assured and dangerous. You simultaneously adore and hate him. This is not a hatchet job, bashing a man whose name and reputation will forever be rightly besmirched anyway: it’s rather an intelligent analysis of how and why Oswald Mosley changed and became the far-right head of a gang of thugs.

It has been said that part of the reason fascism failed to take root in Britain is because we find it too easy to laugh at ourselves, and all the posturing and the uniforms we find ridiculous. There’s probably some truth in that. Whereas the serial traces the roots of Mosley’s creeping anti-Semitism, the worst bigotry that infects the extreme fringes on both sides of the political spectrum, it’s less successful at tracing the reasons for his general racism. In fact, the weakness of the serial is that the final episode feels rushed. It ticks off key moments, such as the Battle of Cable Street, in which the local Londoners refused to allow Mosley’s blackshirt parade to pass; but it skims only the surface of what was a monumental shift in Mosley’s thinking, and asks that we consider the death of his first wife as an explanation for his increasingly extreme views. Thus, meetings with Mussolini and Hitler feel as if they come out of nowhere. It’s a shame, since the first three episodes are plotted so meticulously. Perhaps a further instalment would have done the show more justice?

Apart from a final episode that doesn’t live up to the brilliance of the first three, there is little to fault with Mosley. The guest cast do a great job of enabling Cake’s standout performance. Hugh Boneville, popular for his part in Downton Abbey, and a familiar podgy face in upper-class roles, plays Mosley’s long-time friend Bob Boothby; whilst Jemma Redgrave plays Cynthia, the long-suffering first wife, and makes her into much more than just a victim of her husband’s many adulteries. Look out for Nigel Davenport in the final episode as Lord Rothermere, editor of the Daily Mail, and, like Mosley, a big fan of Herr Hitler’s.

It’s rare to find compelling political historical drama, so Mosley comes recommended. It’s not without its faults, but overall, it’s a great serial.