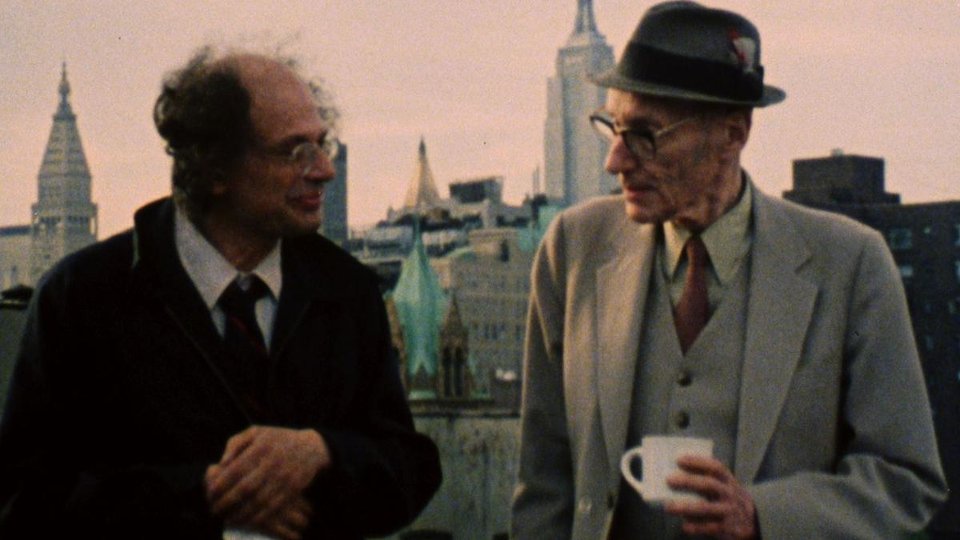 Burroughs: The Movie began life as film student Howard Brookner’s NYU thesis project, and then expanded into a near 5-year odyssey exploring the extraordinary life and career of the Godfather of the Beat Generation. Produced between 1978 and 1982, the film was shown in a few arthouse cinemas when it was released, as well as a few TV screenings in the UK on the BBC Arena programme. Aside from that, the film was essentially lost, and became the stuff of legend.

Then in 2011, Aaron Brookner, the nephew of the late director discovered a print of the film. He led the effort of restoration, culminating in a premiere at the New York Film festival in 2014, and a home release through the Criterion Collection.

The film combines footage of Burroughs in conversation, on stage giving readings of his books, his extraordinary appearances on SNL, and interviews with his friends and contemporaries, such as Allen Ginsberg, Terry Southern and Herbert Huncke. This all comes together in an impressively candid and intimate way. It’s hard to imagine another artist of this stature allowing such access to his life.

There is a fabulous moment early in the film when he is sat with his brother Mortimer, going through old photos and talking about their childhood. Mortimer says that he tried to read Naked Lunch, but only got halfway through – not because it shocked him, he just found it disgusting!

Burroughs himself strikes a fascinating figure. A dapper old gentleman in his elegant suits, and mannered speech. If you only knew him from the cut-up, controversial and experimental prose of Junkie, Naked Lunch, and The Nova Trilogy, you might expect to find a more unconventional figure than the man Brookner’s film presents.

Despite depicting such an interesting figure, where the film falls flat is in it’s complete lack of shade. There is no lightness of touch. Brookner spent nearly 5 years with Burroughs, but you get the impression that he never laughed a day in his life. Certainly, his life was scarred by tragedy, not least the death of his son which occured during the making of this documentary. But in it’s portrait of Burroughs – his life, his career, his body of work, his vast influence on literature – apart from a few dark chuckles elicited from his scabrous prose, the film fails to find a single moment of levity.

Should I be surprised? I don’t think anyone looking for a fun read has ever turned to the writings of the Beat Generation. Which I think ultimately brings me to the tipping point of this film. If you love Burroughs, Ginsberg, Kerouac et al, and your bookshelf is bending under the weight of their collective output, then you will love Burroughs: The Movie. This film was made for you. If you think however that the entire beat movement was a collection of morose, college-dropout charlatans, nothing in this film will change your mind.

As with all Criterion releases the supplementary features are excellent. Among the interviews, rare outtakes, documentaries and essays, there is an audio commentary from none other than Jim Jarmusch, who was the sound recordist on the film.