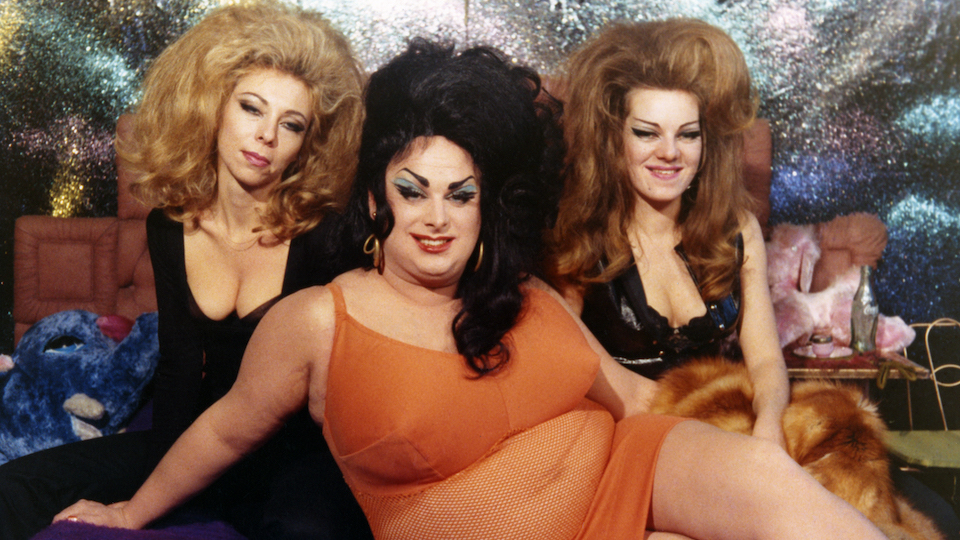 How do you follow up the notorious sleaze-fest of Pink Flamingos, the infamous and outrageous midnight movie cult classic that gave writer-director John Waters his breakout hit? Simple answer: you can’t. Even the self-described Pope of Trash knew he couldn’t top the filth and depravity of his previous film, and wisely chose not to with Female Trouble. But don’t go in here with your eyes closed, this is still a John Waters film. There’s plenty of repulsive material designed to shock and appall.

What Waters does instead with Female Trouble is produce a true star vehicle for Divine (legendary drag queen Harris Glenn Milstead), and this is without a doubt the best Divine movie that Waters made. Cleaned up by Criterion for this terrific Blu-ray release, the colours are vibrant and strangely beautiful, in a kind of scuzzy skid-row kind of way.

The plot follows delinquent teenager Dawn Davenport (Divine) who goes berserk and leaves home on Christmas morning when her parents don’t buy her a pair of cha-cha heels. She hitchhikes to the big city, and ends up having sex on a dirty roadside mattress with the dirty old creep who is giving her a ride. This disgusting man with shit-stains in his undies is also played by Divine, which makes the scene itself grossly hilarious.

This encounter lumps her with a kid, who she names Little Taffy (played as a young child by Hilary Taylor and then as a bratty teenager by 26-year old Mink Stole), and in the ensuing years, Dawn descends into a life of crime. Her criminal exploits ultimately lead to her crossing paths with freaky salon owners Donald and Donna Dasher (David Lochary and Mary Vivian Pearce) who want to exploit Dawn as part of a disturbing and debasing art project. They want to photograph Dawn whilst she is committing crimes. To reveal anymore would spoil the fun.

Female Trouble is the perfect hideous marriage of Waters’ love of exploitation movies and Divine’s love of melodrama. The dialogue is vile and hilarious, and Divine delivers it in that perfect, prissy Liz Taylor fashion. There’s a kind of shrill, amateurish delivery from the rest of the cast, like a chaotic home movie, but somehow it works.

As with most of Water’s early work, there’s very little technique. It has that crazy gonzo element where you’re never quite sure what is going to happen next. It’s all ferocious attitude, over the top acting, and wild production design. But unlike some of his previous films—which were episodic and just jumped from one outrageous scene to the next—Female Trouble does tell a proper story. It might be a ripe and ribald melodramatic satire, but it has a beginning, middle, and an end.

The film follows the classic ‘delinquent teen’ narrative, but at the same time subverts every expectation you have of this type of film. But then Waters morphs the film into a nailed-on satire of what the Dreamlanders (Waters’ regular troupe of collaborators) had become in the wake of Pink Flamingos breakout success. A novelty of monstrous art, being exploited and gawped at by hip, middle-class, weirdo tourists.

This is without a doubt one of Criterion’s finest recent releases. The special features are the sleazy icing on this particularly filthy cake. There is a director’s commentary, recorded for the DVD release in 2004. 90-minutes of John Waters talking about movies, Baltimore, and reminiscing about his old crew of weirdos and collaborators, many of whom are no longer with us. It’s a great listen.

Trims and Cuts is 15-minutes of work print footage, all unused clips and outtakes that had been sitting in Waters’ attic for over 40-years. John Waters in conversation with film critic Dennis Lim is a fascinating discussion about the making of the movie, and the place it has taken in pop culture.

Dreamlanders is a series of interviews with Waters’ collaborators. Little Taffy sees Waters interviewing Hilary Taylor, the actress who played the young version of Little Taffy. This is a fun interview with Taylor (who never acted again) reminiscing about her experience on the film, and Waters finding it hilarious that she grew up to be a social worker.

The disc also includes 11-minutes of extremely rare on-set footage, filmed during the courtroom and dinner party scenes, with John Waters providing commentary. This is special feature gold. Next up is Crime and Beauty, which is outtakes from the 2013 documentary I Am Divine, cutting together all the interviews with the cast and crew talking about their time making Female Trouble.

Finally, there is Lady Divine. This is one of those astonishing extras that Criterion occasionally dig up. It is a roundtable interview with John Waters, Divine, David Lochary, and Mink Stole, conducted at Andy Warhol’s Factory, and which aired on Public Access TV in New York. It’s totally amateur, the footage has completely deteriorated and all the colours have bled, but it’s a tremendous archival piece.