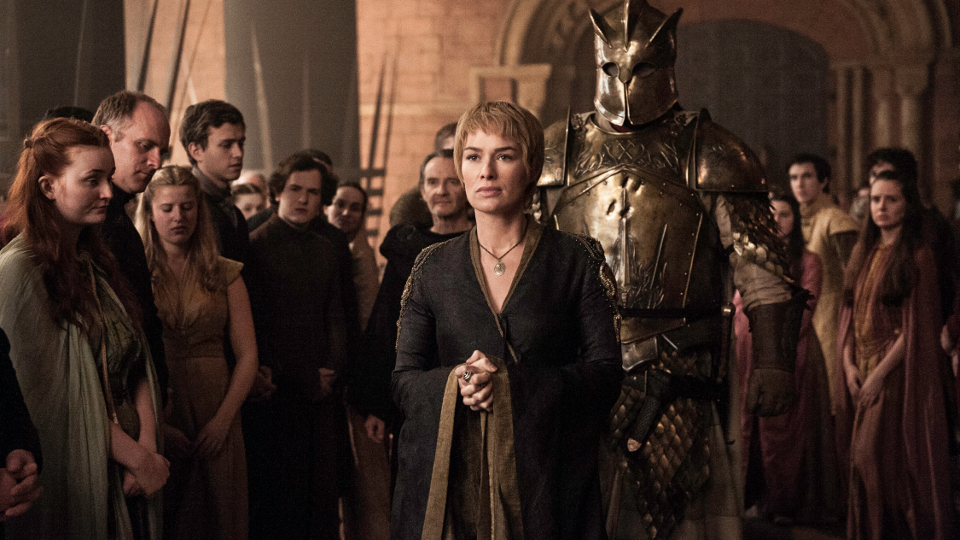 The seventh episode of season six saw the return of yet another favourite character.

We mentioned our predictions for the eighth episode in our No One preview.

The episode opened up with Izembaro’s Braavosi theater troupe putting on their latest play. Lady Crane (Essie Davis) was again playing Cersei Lannister. She appeared to be using some of Arya Stark’s (Maisie Williams) tips as she reacted to the death of Joffrey vowing vengeance.

After the performance she went to get changed and have her usual drink of Rum but noticed something was up. Behind a curtain she discovered a wounded and bleeding Arya. Lady Crane tended to her wounds and told her she had plenty of practice due to her experience with bad men. She had often fought with them, put holes in them and patched them up.

She offered again for Arya to join the troupe and said they would head for Pentos soon. Arya said it wasn’t safe, knowing The Waif (Faye Marsay) was looking for her. Lady Crane gave Arya some terrible homemade soup and Milk of the Poppy to help her sleep and rest.

Next we caught up with Sandor ‘The Hound’ Clegane (Rory McCann) who was on a mission for blood. He tracked down some of the Brotherhood without Banners who murdered Ray’s camp and cut them to pieces with an axe. He accused one of being ‘Shit at dying’ for using his last words to just swear at him.

He later caught up with the rest of them and found Beric Dondarrion (Richard Dormer) who he killed in season three, ready to hang them for their crimes. Also there was red priest Thoros of Myr (Paul Kaye) who keeps resurrecting Beric.

The Hound requested that he be allowed to kill them and they agreed he could have two of the three. They wouldn’t let him use his axe so he pushed the pair to hang. As they were dying he removed the boots from one to replace his own. Beric later offered The Hound to join them and he agreed.

Across the Narrow Sea in Meereen, Tyrion Lannister (Peter Dinklage) and Lord Varys (Conleth Hill) took a walk. Tyrion was happy his truce with the Masters was working as they observed a Red Woman preaching to the people about Daenerys (Emilia Clarke).

In King’s Landing, Brother Lancel (Eugene Simon) and a group of Sparrows were granted entry to the Red Keep. They were their on orders of the High Septon who commanded Cersei (Lena Headey) to come to him.

Later in the throne room Cersei was surprised to see her son, King Tommen (Dean-Charles Chapman) was to be making an announcement. She was most annoyed at being told by Kevan Lannister to take her place in the gallery with the other ladies, instead of at the side of the Tommen.

His announcement was again about the Faith and the Crown. He explained that Cersei and Loras would be put on trial. He also abolished Trial by Combat meaning his mother couldn’t call upon The Mountain and would face a more traditional trial. Qyburn told her that his little birds were investigating a rumour and added that there was much more to tell.

In the Riverlands, at Riverrun, Brienne (Gwendoline Christie) sarcastically commended Podrick (Daniel Portman) for his ‘Keen military mind’ for pointing out a siege was taking place. She informed the riders that met them that she was there to speak with Jaime Lannister (Nikolaj Coster-Waldau).

While they spoke, Podrick was grabbed from behind. Fortunately it was just Bronn (Jerome Flynn) messing about and he gave him a brief fighting lesson.

Brienne told Jaime of Sansa’s mission and he was impressed that she was still alive. He commended Brienne for completing her mission. They both explained their plans for Riverrun and Brienne proposed she be allowed in to talk Brynden ‘The Blackfish’ Tully (Clive Russell) into surrendering.

She had Jaime agree that the Tully army be allowed to pass unharmed to head North if she was successful. Jaime agreed to give her until nightfall. She pointed out that honour would compel her to fight him if her plan didn’t work.

The Blackfish was too stubborn to listen, despite Sansa’s letter. Brienne told Podrick to send a Raven to Sansa explaining her failure.

Back in Meereen, a happy Tyrion drank wine and convinced Grey Worm (Jacob Anderson) and Missandei (Nathalie Emmanuel) to join him in a glass. He then told a joke and managed to get them both to join in on the fun for a change. There were even smiles from both of them.

A bell rang out as the city was attacked from the sea. The Masters had turned up in their ships and were launching fire. Grey Worm took charge and began forming a plan to fight back. A large crash sounded out and one of the guards went to investigate. Suddenly Dany walked in and Drogon could be seen flying off into the distance.

Back in Riverrun, Jaime went for a talk with his captive, Edmure Tully (Tobias Menzies). He explained how he would kill all the Tully’s if that’s what it took to get back to Cersei. He then hatched a plan to take Riverrun.

This involved letting Edmure go free so he could enter Riverrun. The Blackfish wanted him left outside but Edmure was the rightful Lord and his men allowed him entry. Once inside he ordered them all to lay down their arms and open the gates to Jaime and his army.

Brienne and Podrick escaped by boat and offered to take The Blackfish with them. Too stubborn he refused to give in and stayed to fight, getting himself killed. From the ramparts, Jaime saw Brienne and Podrick in their boat and gave a wave which Brienne returned.

The episode ended back in Braavos with Arya Stark. She awoke from her rest to find The Waif had come and killed Lady Crane. Next she wanted Arya dead but despite being wounded she managed to flee.

The Waif gave chase across the city and it quickly became clear that Arya was struggling. She got away and managed to lose her for a short time. Once spotted again she took a big jump and landed badly, falling down some stairs and reopening her wounds.

The Waif followed the trail of blood to find Arya in a dark candlelit room. She’d gone to retrieve her sword, Needle, and the Waif entered, shut the door and gave her a choice to die on her knees or standing. Arya stood and used Needle to extinguish the candle.

At the House of Black and White, Jaqen H’ghar (Tom Wlaschiha) spotted a trail of blood. It led him to the walls of faces where he found a new face waiting for him. It was the face of The Waif, so Arya had been successful in killing her.

As he turned he found himself faced with Arya and Needle. He told her that she was finally No One. However she replied that she was Arya Stark of Winterfell and was going home. Jaqen gave her a nod apparently accepting her decision.

Let us know your thoughts on No One in the comments below as well as your hopes for the rest of the season.

Already looking forward to the next episode? Read our preview of Episode 9 ‘The Battle of the Bastards’.

View more images from No One in our gallery below: