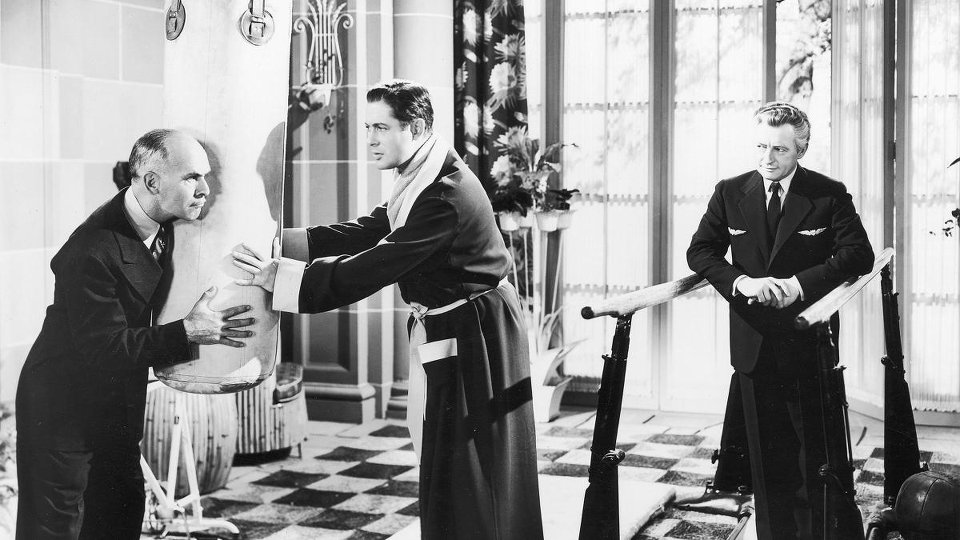 This delightful comic fantasy from 1941 tells the story of Joe (Robert Montgomery) a talented working class boxer and amateur pilot who dies after losing control of his plane. It turns out however, that his death was not on the cards. A clerical error led to his demise, as he isn’t scheduled for arrival in the afterlife for another 50 years.

During his time in the afterlife, he meets Mr. Jordan (Claude Rains), the sophisticated senior angel, who tells Joe that they can’t return him to his body as it has already been cremated. Thus begins their search for a new body. They eventually settle on the recently drowned body of a dodgy, but incredibly rich investment broker Bruce Farnsworth, who has been murdered by his wife and her lover.

To everyone’s surprise, Farnsworth is soon up and about with a new vigour for life. We still see and hear good ol’ Joe, but everyone else sees Farnsworth. Only now he has morals, wants to make up to the people he swindled, and keep training for the big fight. Dead or not, Joe still wants to be the champ!

Here Comes Mr. Jordan was a huge risk for Columbia Pictures back in 1941. As well written as it is (based on the 1938 play Heaven Can Wait), the costly fantastical elements meant there was a lot of pressure for this film to be a hit. Not only was it a hit, Here Comes Mr. Jordan inspired a genre of films about guardian angels and the afterlife. In the 40s alone, there was I Married an Angel. A Guy Named Joe and It’s a Wonderful Life. There was also Down to Earth, a Rita Hayworth starring sequel, then Warren Beatty remade the film in 1978 as Heaven Can Wait. Then in 2001 there was a further remake with Chris Rock called Down to Earth.

Here Comes Mr. Jordan is an incredibly charming film, breezing along with a witty script and an incredibly likeable cast. Fans of classic Hollywood will delight at this terrific release from Criterion and the stunning new 2K restoration.

The extras are as always, a treasure trove of goodies. There is a conversation between film critic Michael Scragow and classic film distributor Michael Schlesinger where they discuss the history and impact of Here Comes Mr. Jordan. There is also an audio recording with Elizabeth Montgomery discussing her father, and her own career with film historian Ronald Haver. One of the real treats in the extras is the Lux Radio Theatre production from 1942 with Evelyn Keyes, James Gleason and Claude Rains all reprising their film roles. Also included is the original trailer.