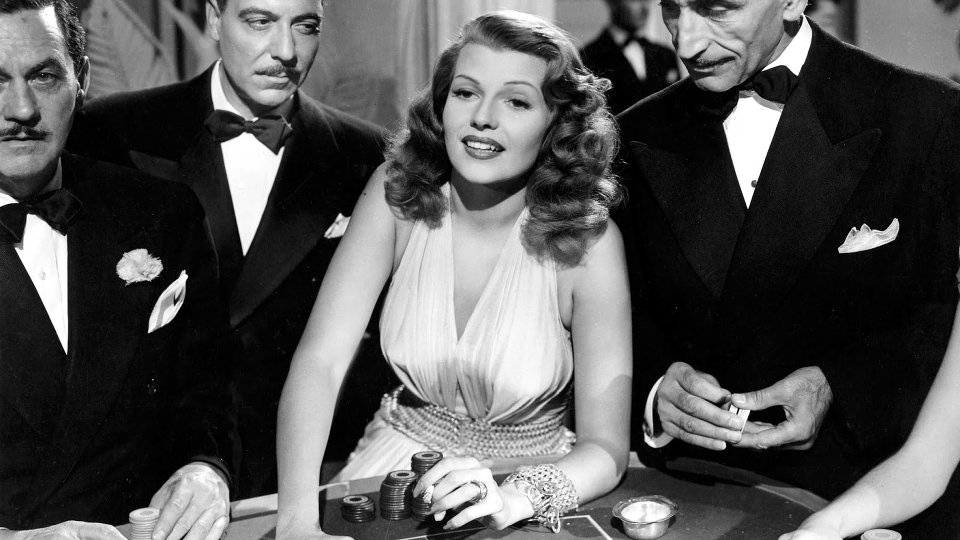 “Gilda, are you decent?” Rita Hayworth bounces into frame, tosses back her gorgeous mane of auburn hair, her eyes twinkling with mischief, and replies, “Me?” In the space of five seconds of screen time, a Hollywood legend is born.

This famous scene is preceded by a murky opening on the streets of Buenos Aires, as tough guy gambler Johnny Farrell (Glenn Ford) forms an alliance with Ballin Mundson (George Macready), the owner of an illegal and swanky casino for high rollers. When Ballin introduces Johnny to his new wife Gilda, he has no idea that they were once lovers.

This love triangle – which skillfully implies, in post Hays Code Hollywood a homoerotic subtext in Johnny and Ballin’s relationship – along with the blistering love-hate dynamic between Gilda and Johnny is the real drive that keeps the film going through it’s overlong running time. Gilda, risking her life by sleeping around with random men tells Johnny, “I hate you so much that I would destroy myself to take you down with me.”

The actual plot is a bit muddled and adds nothing in terms of the overall enjoyment of the film, all of which stems from the sordid three-way between the two men and Gilda. Director Charles Vidor, does an excellent job in the way he frames and films the three characters, using shadow, focus and jarring perspectives to reflect the loyalties of the audience. Our sympathies shifting towards whichever seems the least unpleasant at any given moment.

In the grand pantheon of film-noir, Gilda is by no means one of the best of the genre, but Rita Hayworth is one of the all time great femmes fatales. In her signature role – the role that defined her career – she illuminates the screen with a smoky sensuality. It is a wonderful and vivacious performance, but the part left a tinge of bitterness for Hayworth, who felt that it defined people’s perception of her for the rest of her life. She was famously quoted as saying, “men go to bed with Gilda, but wake up with me.”

Gilda is a very watchable film, but ultimately owes its classic reputation to a series of fleeting but iconic moments, all involving Rita Hayworth. The afore mentioned hair toss, the dance to Amado Mio, the strapless Jean Louis dress and sultry performance of “Put the Blame on Mame,” and the incredibly suggestive removal of a silk evening glove. Hayworth dominates the film so completely that every scene without her is a drag.

On the disc is a commentary from Richard Schickel recorded in 2010. There is also en excellent piece with Martin Scorsese and Baz Luhrmann sharing their appreciation for Gilda. A 1964 episode of Hollywood and the Stars, tells the story of “love Goddess” Rita Hayworth. The supplementary materials are rounded off with an interview with film historian Eddie Muller, and the original trailer.

In this article:Gilda, Rita Hayworth, The Criterion Collection